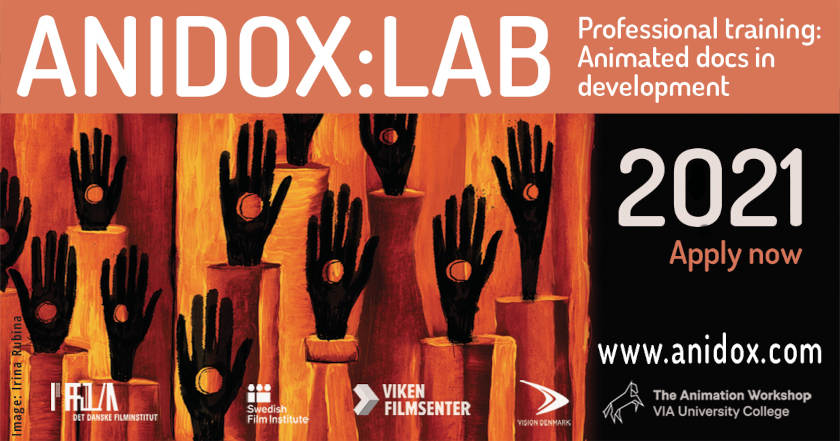 ANIDOX is a creative platform for the development and the production of animated documentary projects.

ANIDOX:LAB is a professional training course – for documentary and animation creatives, directors, producers and professionals with an animated documentary project in development. We offer a series of online seminars and consultation sessions running between April and October 2021.

The lab uniquely addresses visual and immersive storytelling. The goal is to pitch a teaser/trailer and build knowledge, network and resources. We focus on collaborative processes, matchmaking, reaching audiences and new frameworks. The coaching seminars and creative workshops are designed to progress from fine- tuning an initial idea, through visual and narrative development, to a pitch package and a teaser/trailer. It is a laboratory which brings professionals together to maximize their capacity and cultivate new skills, develop their respective projects, and expand their international networks while facilitating new collaborations. Select participating ANIDOX:LAB projects have the opportunity to showcase their work at various prestigious international events and festivals.

ANIDOX is a part of The Animation Workshop / VIA University College’s professional training programme. In partnership with the Danish Film Institute, the Swedish Film institute, Viken Filmsenter, CPH:DOX, Nordisk Panorama and Documentary Campus.

To apply for ANIDOX:LAB, please fill in the application form on the Anidox website

An application includes a short (500 Character) description of your animated documentary project and a short motivation text (250 characters).

In addition, you are required to attach a single PDF document which includes:
1. A brief concept outline and synopsis.
2. A director’s statement.
3. A short bio and CV (also of key team members or production company).
4. Online links to previous works, and if relevant, links to work-in-progress.
5. Relevant visual material.
Candidates are expected to have previous experience or professional background in animation or documentary.

Module IV: 15.10.21
Feedback panel: pitch and get feedback and commentary on projects developed at ANIDOX:LAB