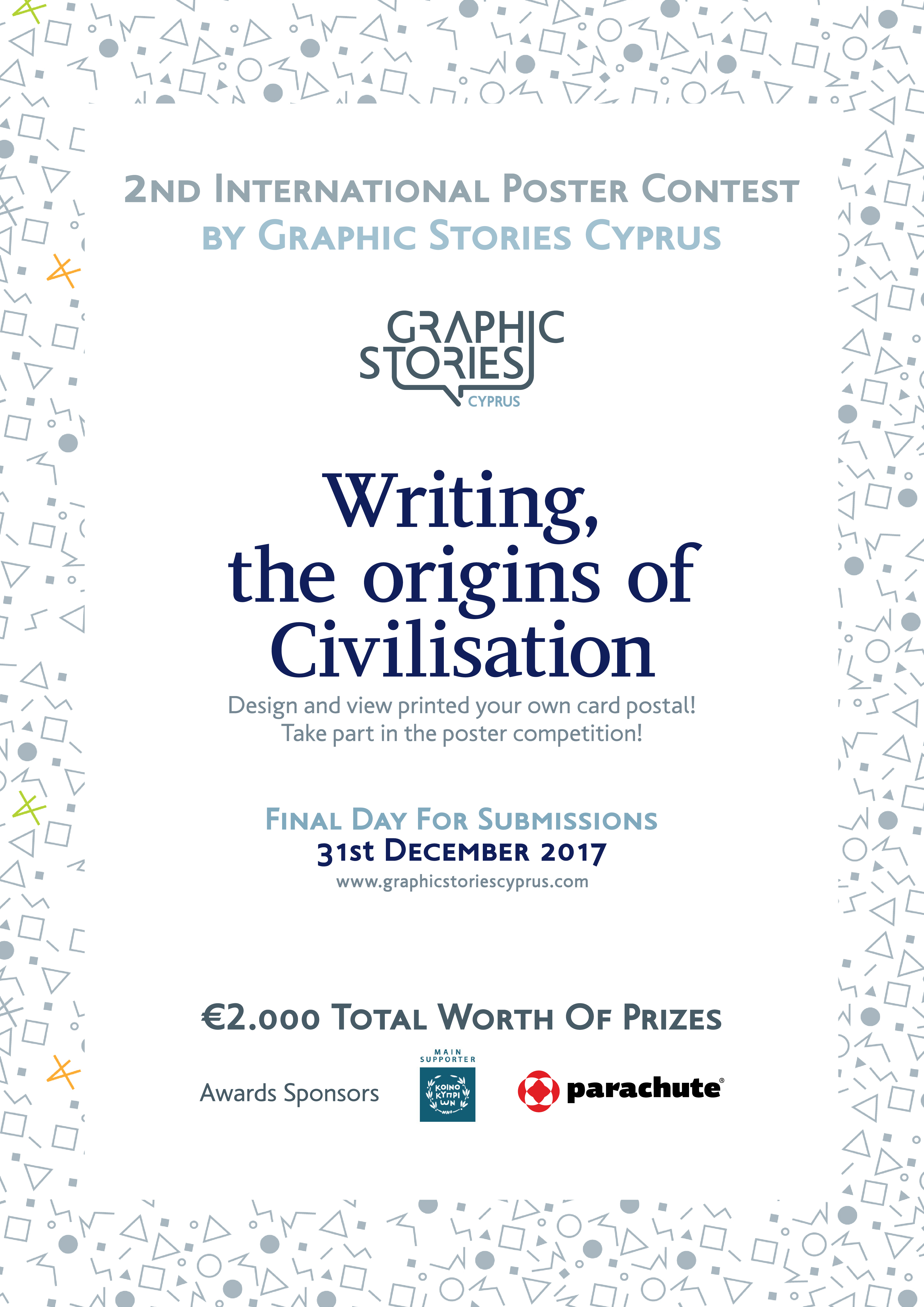 international poster contest on "Writing, the Origins of Civilization" by Graphic Stories Cyprus.

Graphic Stories Cyprus  (main contributors: Aggeliki MK Athanasiadi and Miltos Karras) invites all the creative people to take part in the international poster contest titled "Writing, the origins of Civilization" and to see their work printed by creating their own postal card. The international contest is part of the 4th Visual Communication Conference in Cyprus ( 9-11 of March 2018).

The creative idea
Few of the achievements of human wisdom can be compared to the creation of writing. This wisdom, which separated him from the rest of the living beings on the planet, began to transform its environment creating civilization, in its modern sense, around 5000 BC. when the first real writing was invented. By the term writing we mean the activity in which the content of a linguistic expression is encoded in such a way that another reader can rebuild, with a relative degree of accuracy, the precise phrase that has been written. While, from this point of view in the earlier, first scriptures the non-encoding of grammatical words made it very difficult or even impossible to reconstruct the exact meaning sought by the author, the great leap in the evolution of writing was achieved around the 8th century BC. by the ancient Greeks, who based on the Phoenician writing of the time, created the first real alphabet.

Symbols, ideograms and images have given their place to the letters. Thought and speech converted to writing and the abstract gained substance. The sounds, the phonemes, the consonants, and the vowels of speech were codified, acquired form and imprinted by every means as a bequest for the next generations. The theme of the contest, "Writing, the origins of Civilisation", and the corresponding exhibition are actions that aim at highlighting and promoting the importance of writing in relation to culture, literature and arts, both locally and globally, as well as the importance in the evolution and future development of humankind. The creatives participating in the contest are invited to visualize their thoughts and ideas in relation to the contribution of writing in the creation of each and any civilisation and the role it has played in its development.

Categories
1. International distinction for professional visual communication designers
Prize: A fonts collection worth of 500 euro from Parachute &  300euro in cash from the Bank of Cyprus

2. International distinction for higher education students (university or college) of visual communication
Prize: A fonts collection worth of 500 euro from Parachute &  300euro in cash from the Bank of Cyprus

3. Cypriot distinction for higher education students (university or college) of visual communication
Prize: 200 euro in cash from the Bank of Cyprus

Prize: 200 euro in cash from the Bank of Cyprus

Specifications
1. Size: The theme should be vertically designed (portrait) and delivered as a digital file. The dimensions must be 50x70cm for the poster and 10x14cm for the card postal.
2. Format / Resolution: The design should have 300dpi resolution, color mode CMYK, format .pdf and is necessary to attach a jpg file for use in the web.
3. A prerequisite is to indicate the title of the contest in English “Writing, the origins of Civilisation” and the "Graphic Stories Cyprus" logo in some place in the poster.
4. The logo of Graphic Stories Cyprus can be downloaded from our site.
5. Each participant can submit only one design.

Submission Procedure
Entries must be sent by email to: This email address is being protected from spambots. You need JavaScript enabled to view it. stating in the title of the email the category of participation as follows:

1. International participation: professional visual communication designers
2. International participation: higher education students of visual communication
3. Cypriot participation: higher education students of visual communication
4. Cypriot participation: high school and technical school students Higher education Students in Cyprus can participate with the same project in both categories [2, 3].
They are required to state it when submitting their participation.
Each file should be named following the scheme "contest_name_surname" for the poster participating in the contest and "cp_name_surname" for the card postal, as well as the file extension.
The e-mail, must necessarily include the following information: the subject must include the title "2nd Contest GSC – Writing" and the category to which the project is submitted as stated above the poster 50x70cm and its adaptation for the card postal 10x14cm as mentioned above your name and surname title (professional, higher education student, secondary education student) contact address and phone number the following statement: "The elements used for the creation of my project are original and do not include third parties intellectual property. With my participation in the contest I accept the terms and conditions of the contest and I grant the rights of free use of my work to the organizers of Graphic Stories Cyprus " the work of each designer should be accompanied by a brief description

Terms
1. Entries that do NOT have all the required information filled in or do not respect the conditions of the contest will NOT be considered valid.
2. The public display of the submitted works is not allowed prior to the announcement of the winners.
3. The distinguished artists will be announced publicly on the day of the opening of the exhibition.
4. Participations whose content can be considered offensive or insulting or unrelated to the theme of the contest will not be considered valid.
5. The winners and distinguished designers grant the right of free use of their project to the organizers of Graphic Stories Cyprus, with the signature of the author.
6. The prizes will be given to the winners directly from our sponsors.
7. The organizers and the jury reserve the right to cancel the contest.
8. The submitted projects should not contain personal information of the designers.
9. The contest is open to higher education students and professional visual communication designers for the International Contest. Higher education students and students of lyceums and technical schools for the Cypriot Contest.
10. The contributors, creative contributors and the members of the jury of Graphic Stories Cyprus can not participate at the contest, volunteers are excluded.

All valid projects received will be printed as card postal, 10x14cm, and will be given to the public of Graphic Stories Cyprus during the three-day event.

The best 50 posters will be exhibited at the Bank of Cyprus Cultural Foundation and the inauguration will take place on March 9, 2018, immediately after the Conferences' lectures. More info on the competition page.

The international contest is part of the 4th Visual Communication Conference in Cyprus ( 9-11 of March 2018).