Eliane Gordeeff brings an overview of Brazil, Portugal, and Spain's participation in the Annecy Festival 2022.

Even over the years, Annecy Festival remains a reference event in this art, in a Latin country, despite the clear hegemony of audiovisual distributions being Anglo-Saxon. Going along this path, I bring to Zippy Frames readers some points about the productions exhibited at the Festival, namely those from Brazil, Spain, and Portugal.  It's always useful to have a broad view of the context in which they were made. I emphasize that I watched the films of these countries that participated in the following sessions: Feature Films, Contrechamp, and Shorts Competitions, besides the Events and Working Progress.

I have to note that it was a surprise that none of the productions mentioned here (in the case of the competitive sessions) did even receive an honorable mention in Annecy. However, I understand the choices and the context in which each festival chooses its awardees.

Unlike previous years, in which the country presented short film productions, in 2022, only one commissioned work was selected. As a feature film, the country is linked to three feature animations.

In the co-production with Colombia, 'The Other Shape' (Diego Guzmán, 2022) was exhibited in the Contrechamp session. The film was produced by Smith & Smith in co-production with Hierro Animación, RTVCPlay, Arcadia Sonora, Daniel Velazco (Colombia), and Estudio GIZ (Brazil).

Peter Press has been living with a press for 20 years and has completed his squaring process. But an incident forces him to remove his press and take on a different Shape. This will go up against his beliefs and endanger his entrance to paradise. He starts a journey where he discovers that the Other Shape is the last trace of his individuality.

A side note: although the director is Colombian (the main country producer), the name 'Brazil' (the minority co-production country) did not appear in the Annecy Festival catalogue credits, despite the ANCINE (National Film Agency / Brazil) being on the credits and the film's poster.

The film shows a dystopic society where people want to shape themselves set in a block. It is metaphorically exciting and has a narrative and visual impact, but the story would be more potent if it were a little shorter. I loved the character designs.

'Forbidden World' (Alê Camargo & Camila Carrosine, 2022) is a feature film selected for the (non-competitive) Midnight Specials Session, executively produced by Arnaldo Galvão & Júlia Galvão (Buba Filmes). The animation film shows a science-fiction space that mixes romance and adventure, a genre not usually explored in Brazilian cinematography. A visually accomplished film, with well-designed, creative backgrounds, and perfect use of its color palette. It has personality and a fine soundtrack. In narrative terms, it is more straightforward and aimed at a young audience.

'Perlimps' was the expected new production by Alê Abreu, almost ten years after the resounding success of 'The Boy and The World' (2013). The film was screened in the out-of-competition 'Événements' session (premieres only). The film does not escape the director's characteristic tripod, color-childhood-music (the first one was "The Cosmic Boy"  in 2007). In 'Perlimps', Alê applies color across the screen, using dreamlike backgrounds, from textured spots - as seen in 'Tito and the Birds' (Gustavo Steinberg, André Catoto, Gabriel Bitar, 2018) and shorts such 'Augur' (David Doutel & Vasco Sá, 2018).

It is a lovely and poetic look that marks the first part of the feature. It is a film more aimed at children, which in the end creates a kind of inversion narrative; it leaves fantasy and brings in the "reality" of the facts, used as a backdrop for the relationship of the two main characters, Claé and Bruó. That final part of the film reminded me of 'The Boy and the World', which demands emotional empathy from the audience but does not have the same impact.

One thing to expect, unfortunately, is that Brazilian productions will become increasingly scarce, given the cuts in incentives for cinematographic production that existed in Brazil, thanks to a mindless government that dismantled existing structures in this sense.

This year, Spain also did not get any short films in the Annecy Festival relevant categories, but an animation feature competed in the official feature competition. From Alberto Vázquez - director of "Birdboy: The Forgotten Children' (2015) and "Homeless Home' (2020) came the long-awaited 'Unicorns War'.

It is a typical Vázquez film, which mixes "cute things" with violent actions. It is a thought-provoking film that draws attention in several ways: (a) It manages to keep the pink color throughout the narrative (in the present time), which is very difficult (b)The characters are very well-built (form and psychology), without personality bias. It has everything. The narrative also tells the "life story" of the main characters, which justifies their decision-making process to the audience (c) The irony in Vázquez's work where a cute character can be evil. (d) Moreover, the film's ending, which in the mythology (I think it is the best word to describe it) of the narrative, can be interpreted as an adaptation of the Angel Fall (according to the Roman Catholic Church doctrine). Vázquez himself defines the film as "Apocalypse Now, Bambi and The Bible, one of my favorite fiction books. I intended to speak of the common origin of all the wars: The people live in a militarized and religious society that controls public opinion. They consider that the magic forest belongs to them and consider the unicorns as demons to be exterminated. The conquest, the violence, the control of public opinion, the fanaticism ... Unfortunately, it is very current".

'Unicorns War' is an excellent film, and I recommend it for those who are not afraid of blood (think of Akira), they like dark humor and do not think inside a closed box.

Another Spanish film was seen in the work-in-progress session. 'They Shot the Piano Player', by Fernando Trueba and Javier Mariscal. It is a production by Huete at Fernando Trueba Producciones with co-production Les Films d’Ici Méditerranée (France), Producciones Tondero (Peru), Submarine (Netherlands), and Animanostra (Portugal). 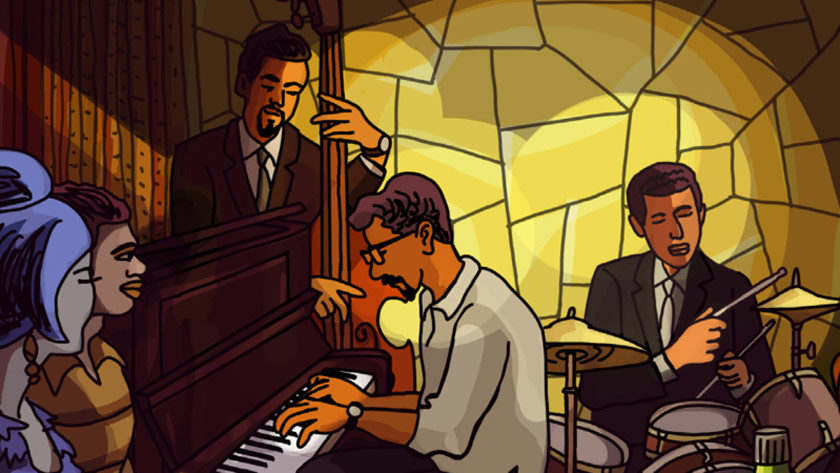 A New York music journalist sets out to find the truth behind the tragic disappearance of young Brazilian piano virtuoso Tenorio Jr. Celebrating the world-renowned Latin music movement Bossa Nova, this film captures a fleeting period of creative freedom at a turning point in Latin American history in the 1960s and 1970s, just before the continent was engulfed by totalitarian regimes.

That is Fernando Trueba's idea developed as a fiction-documental narrative with the art direction of Javier Mariscal, based on the drawings of the Brazilian illustrator Marcello Quintanilha, mainly in the interview scenes. The film shows many interviews with important cultural Brazilian figures, such as Chico Buarque and Ferreira Gullar, and boards a significant moment in Latin America: the 1960s with its coup d'etat. Trueba defends his choice for animation: "It would be challenging to select an actor to represent these actual personalities. The film also shows different moments and places, and I thought the animation was a perfect form to join documentaries, music, and political issues".

This Spanish film seems to be a fine production (just a short film excerpt was shown), bringing the color as a vector to point to the moments of the narrative - interviews, past and present. Mariscal's style is also easily identified, like in 'Chico & Rita' (Fernando Trueba, Javier Mariscal, 2010).

The participation of Portugal in Annecy 2022 has a historic one. For the first time, the country had two animation feature films selected at the festival: one in 2D/3D and the other in 3D, real (stop motion with puppets) and digital,

As Zippy Frames has been following these productions closely - an interview with Laura Gonçalves will soon be published - I will not comment further, but leave the links to these articles at the end of this review (scroll down for details). But I need to stress that the four animation films mentioned above are extremely well made.

Regarding Portugal, there is no doubt that the role of the AGÊNCIA – Portugues Short Film Agency and the ICA (Instituto Nacional de Cinema), and classy entrepreneurship in the country have achieved excellent results over time. Knowing how to produce with a tight budget is not something easy or simple. "It is necessary to give up some objectives, to know how to adapt to the needs and skills of all partners", Nuno Beato told me. That is, even more, the case when dealing with stop-motion production.

However, everything is a process and a journey that did not just occur overnight. The same situation happened with the Brazilian animation production. In recent years, the constant Annecy participation resulted from a process that was initiated back in 2004, when co-production of the animated series with Canada and subsequent government support was granted. Without such incentives, it is impossible to be visible in such a competitive market, in which large companies dominate the distribution and sales. The diversity of narratives and aesthetics is also essential and only occurs when there is a diversity of origins of audiovisual works.

Another point to be noted is that Spanish productions face the same problems that Brazil and Portugal do, they often have to compete for public attention with live-action ones (which, by nature, has a much shorter production time compared to animation). Although, this year, among these three countries, Spain was the only one with a large stand at MIFA this year, sharing and promoting the country's studios and productions. That makes one predict that shortly we can have more Spanish productions shown in Annecy and on the various screens. 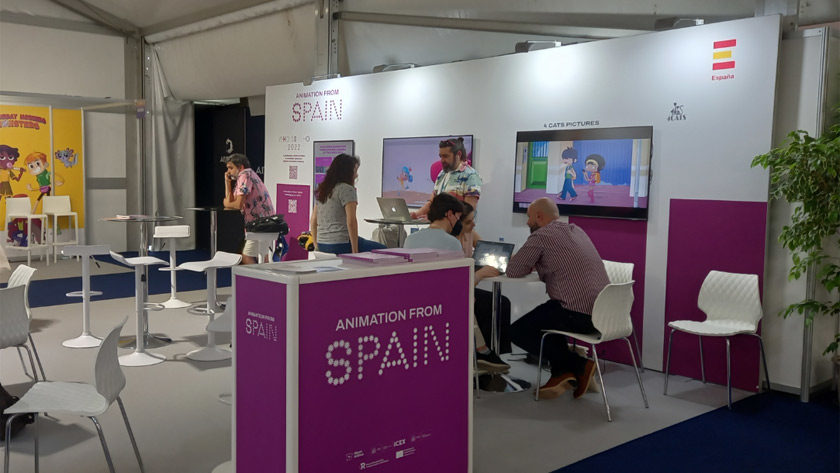 Read Also: Our articles and interviews about Portuguese productions: