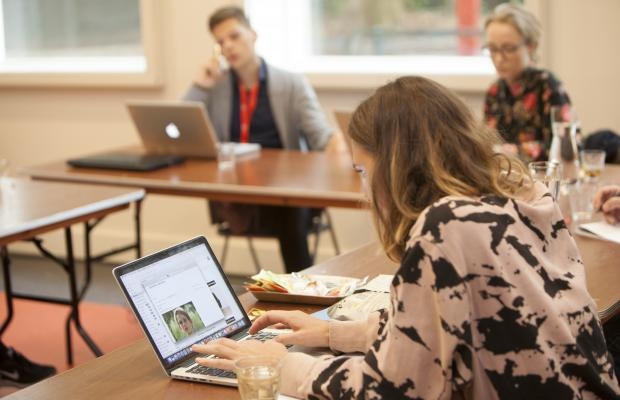 Cinekid Script LAB is a six-month script-training programme for writers with a children's film project. The training was initiated by Cinekid in 2014, and takes place during Cinekid for Professionals in October, and the Berlinale the following February

During the Cinekid Script LAB, an international group of writers and writer/directors will work on their plans for children’s feature films. The programme offers tailor-made coaching and training; it answers to the specific writer’s and story’s needs, along a six-month trajectory.

or the seventh edition of Cinekid Script LAB, 19 writers from 14 countries have been selected to participate in the six-month project-driven initiative that focuses on the development of scripts for children’s films.
In total 14 projects, that reflect on a great variety of actual issues from the perspective of the youngest generation, are selected for the hands-on workshop. The script workshop is designed to elevate each project to the next stage of development, making their script vivid and sharp. The LAB begins before Cinekid for Professionals in Amsterdam in October and runs through to Berlinale in February 2021.

The upcoming edition of Cinekid Script LAB will be larger than ever. For the first time, 14 projects are selected to participate in the intensive tailor-make script-training workshop.
From the many strong applications that Cinekid received, the final selection includes four projects from countries that are making their debut at Cinekid Script LAB: Turkey, Greece, Serbia and Hungary. Cinekid offers these writers a spot in the LAB, where they can embark upon the next phase in the development process, strengthen their project and position it internationally. For the 2020-2021 edition, the Polish Film Institute is back as one of the partners in the LAB.

Festival Director Heleen Rouw comments: “Over the past years, we have seen a continuous increase in strong and unique applications for the LAB, and this year was no different. It is striking to see relevant topics such as environmental issues, inclusion and identity in these feature film projects for young audiences. We can’t wait to work with these talented writers!”

About Cinekid Script LAB
During Cinekid Script LAB, participants work with internationally acclaimed advisors who push them to their creative limits. The coaching offered to each filmmaker is tailor-made and addresses the needs of both the writer and the story across the LAB’s twin-phased trajectory. Teambuilding and the interpersonal exchange of ideas and experiences within a safe and nurturing lab environment are the foundation stones of Cinekid Script LAB.

Further information on Cinekid Script LAB can be found here.

How I Wrote A Book By Accident (Hungary), written by Nora Lakos
Production company: Juno11 Production

Submissions need to be feature length and can either be fiction, documentary, animation as live-action projects for an audience of 4-12years old and written from their perspective. The main criteria for selection are the viability and quality of the plans and the demonstrable talent of the writers.  Only projects that have a production company attached are eligible, and a signed contract with the writer(s) should be provided along with the submission.