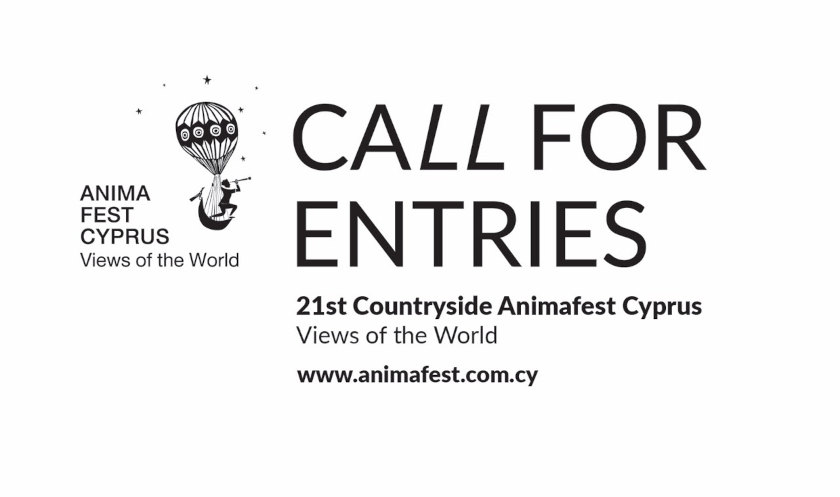 Countryside Animafest Cyprus is the official Cyprus animation Festival. Its aim is to cultivate the art of animation, by raising audience awareness and promoting cultural, financial and social development in the field of independent animation filmmaking. Its various activities throughout the year include the annual Countryside Animafest Cyprus, expert seminars and workshops, academic forums, special screenings, etc. In this way the festival initiates international collaborations and provides opportunities for artistic growth.

Animafest Cyprus, the International Animation Festival of Cyprus, announces the call for film submissions and invites you to enter your films to the following competition categories at the 21st Countryside Animafest Cyprus - Views of the World.

There is no entry fee.

Founded 21 years ago, the official Animation Festival of Cyprus, showcases a selection of the world’s latest productions, focusing on independent, non-commercial films.

The 21st Edition of the festival will take place between 10 - 13 of August 2022 at the village of Salamiou.

Rationale: In telling a universal story of misunderstanding, regret and forgiveness, the artist revitalises a classic form of Papier-mâché puppet animation. The jury were impressed with the artist’s command of the details of facial expression and body language to convey subtle and convincing displays of emotion, and her unexpected use of fluid camera techniques such as handheld movement and shifting depth of field to convey tension between and within her characters, and to bring their conflicting, non-linear, perspectives to life.

Rationale: A powerful cry of anxiety about national and personal identity wrapped in a dense narrative packed with visual gags touching on social, environmental and humanitarian issues whose repetition and subtle subversiveness borders on the poetic.

Special Mentions by the jury members:

Rationale: The National competition was a showcase of the early, encouraging steps of a new generation of Cypriot animators who are finding their voice and creative identity within a demanding and competitive international space. In this spirit, the Jury noted “In Between” by Eleni Chandriotou for its precise aesthetic choices and characteristic style, deployed in the service of a clear narrative that convincingly reflected the time and place of its creation.

Audience awards::
In the International Competition: Physics of Sorrow by Theodore Ushev. Canada.
In the National Competition: Ena tzi ena by Michalis Papanikolaou.
In the childrens’ program: The Kite by Martin Smatana. Czech Republic, Slovakia, Poland.

As the festival organizers state, 'during these terrible times for all humanity, international festivals around the world were dealt a huge blow. Animafest Cyprus managed to escape this wave of cancellations because screenings take place outdoors. We count ourselves extremely lucky to have been able to honour the selected films by showing them on the big screen. While it is wonderful that digital platforms have provided so much accessibility in the last few months, making possible the realization of film festivals online, the collective viewing experience that we were able to share these last few days is priceless and must never be taken for granted".

Awards for the 18th edition of Countryside Animafest Cyprus Views of the World: