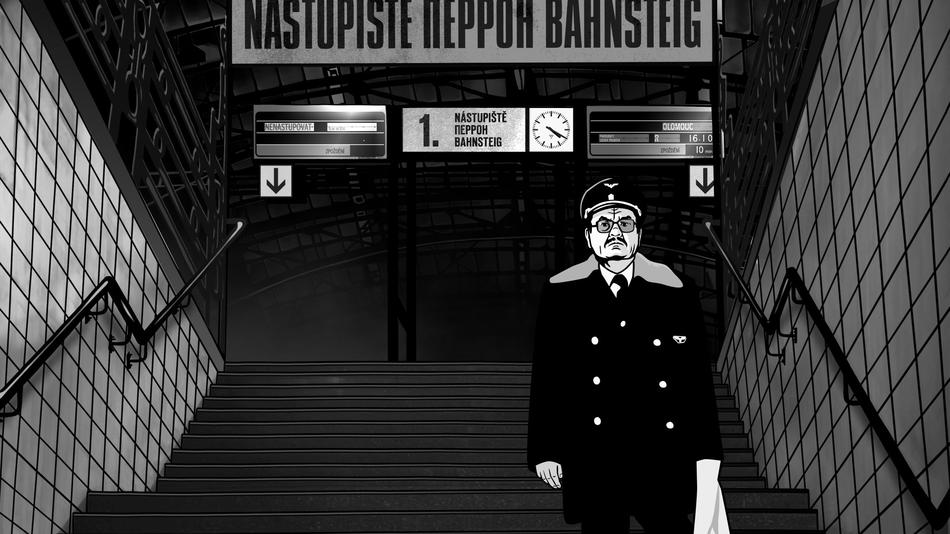 Tomáš Luňák presents a shameful episode in recent Czech history in rotoscope with his Alois Nebel, and gives a depressingly moody yet almost too hard to infer reality

Alois Nebel has been adapted from the series of successful graphic novels by by Jaroslav Rudiš and Jaromír 99, and narrates back and forth in time a harsh incident from 1945 in the Czechoslovakian-German borders, and its consequences up to 1989 and the fall of Communism.

The centerpiece is the sad and repetitive thinker and train dispatcher, Alois Nebel (Miroslav Krobot), a guy with some memories of his own to haunt him during his lonesome nights. His job in the remote station of Bily Potok makes him a witness of an escape attempt to cross the borders. The Mute (Karel Roden) will be soon captured, and Alois Nebel will join him soon afterwards in a mental 'hospital'.

But what starts as a political thriller and personal drama (Nebel and The Mute  will be found to have more in common than life resignment) turns into an existentialist canvas on which the history of the Czech Republic under Nazis, Communists and Václav Havel is presented.

The moral question, which of those were the better conquerors, surfaces ironically, considering that past Nazi  and local crimes (presented in Nebel's hallucinations) have left their mark on the cunning informer Wachek (Leoš Noha), and his mean father (Alois Švehlík).

Still, there is not a single character, including Nebel's future love interest and conservative KvĚta (Marie Ludvíková) that rests safe from the overbearing dread and hopelessness.

The black and white visual feel of Alois Nebel is masterfully gloomy: thunderstorm and the repetitive snowing only match Nebel's repetitive reciting of train stations. This is a place where noone may help anyone (and the sparse music segments heighten the alienation effect), while the final storm that separates the two main characters is outstanding.

Still, both the political situation (only hinted at through radio news station) and, more importantly, the personal drama is so vaguely drawn that one cannot help but feel helpless in deciphering the causes which have led to the consequences depicted.  A series of dramatic events (including a killing) are presented in isolation, yet Alois Nebel seems himself to make  the connections -the film doesn't.

Humans on the brink of dementia in Alois Nebel need to find the cause of their illness -otherwise the comfort ending that follows will not fulfil its purpose.

Alois Nebel poses questions about morality and the personal predicament in an environment that permits no lying excuses. The characters expressing those questions need to have a differentiated life of their own.