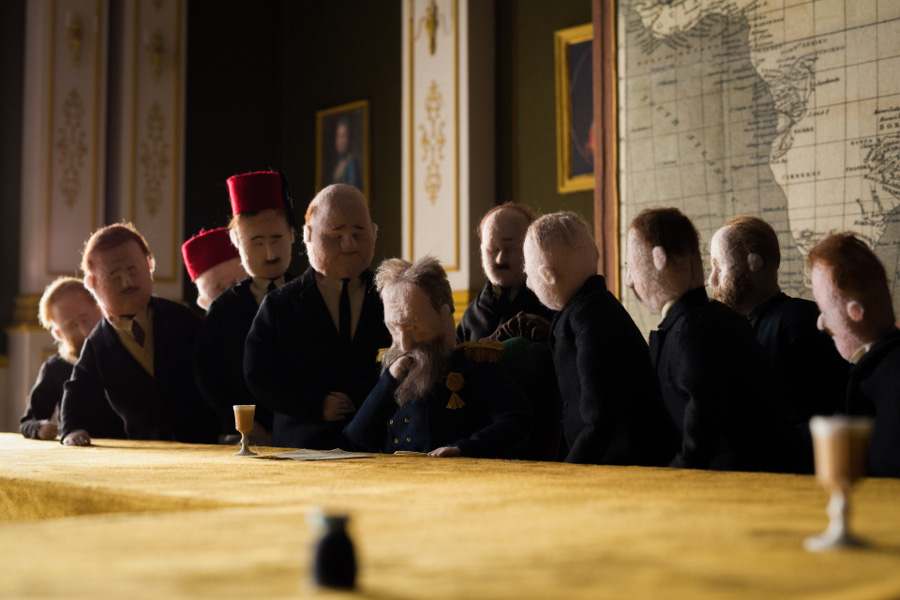 This Magnificent Cake! Review: To Have Your Cake and Let It Go

Personal journeys of lost cause mingle with vestiges of colonial power in the stand-out stop-motion animation feature by Emma De Swaef and Marc James Roels.

This is a feature animation film that has all of the ingredients that could never make it noticed. An amalgam of 5 colonial stories in 1885 Belgium Empire, told in puppets, and within the traditionally unmarketable option of 44-minute duration (its directors were very well aware of that in the Animafest Zagreb screening, where the film screened to a packed room).

But, whatever the initial reservations, and regardless of the film's ultimate box office fate (there is a cruel, Incredibles 2 world out there), This Magnificent Cake! (Ce Magnifique Gâteau!) by Emma De Swaef and Marc James Roels  -produced by Beast Animation (Belgium) in co-production with Vivement Lundi ! (France) and Pedri Animation (The Netherlands)- uses every of its shortcomings to its own advantage.

Borrowing its title from King Leopold II's expressed wish for a piece of 'this magnificent cake'  of fertile African territories (call me Congo), the mildly hypnotic but still soberly made stop-motion film unfolds 5 different character and stories. Unlike other anthology films, where a frame narrative is sought,  here the film  it places them in the manner of Max Ophüls La Ronde (1950): reappearing characters with flawed sensitivities light up the scenery of both palaces and reassuring nature as a last resort of humanity.

A troubled king that can't get decent sleep (but is potent enough to fire a two-note clarinet music player); Ota, a middle-aged Pygmy working in a luxury hotel, who needs to stand up to his alloted duties; the failed businessman Van Molle on an expedition with a big amount of empty alcohol bottles; a lost porter who meditates in African rivers, before he becomes part of the stream;  Louis, a young army deserter, who needs to rediscover (or dream about) family values long gone. All these are part of the mosaic which meditates about the nature of being outside normalized society -and essentially being left to your own devices.

Moving effortlessly between comedy and tragedy, here's mostly (bad) luck that gives its bittersweet notes to characters who are left to express their most inner wishes and expectations, before finally having their final screen presence.

Unlike Oh, Willy [watch it here], the previous joint effort of Emma De Swaef and Marc James Roels (which made felted wool puppet design an animation trend in the independent community), here characters also talk. Mostly in self-narration or third-person narration (and in Dutch, French, Aka, and Malinke languages), this is more of a (fine) inner monologue than a plot development trick.

Like in Oh, Willy... characters (tiny eyes, big puzzled face) are essentially left unaided, whether they stand in African nature  or walk inside imposing architectural interiors (production design by Jean-Marc Ogier). In essence, the warmth and roundness of character design is cleverly superimposed - as a separate layer of meaning- in front of the cold and linear set constructions. Cinematography for the film's interior scenes only enhances (in deep focus) this disparity. In one of the most interesting stories and scenes, the army deserter and social outcast Louis needs to walk into an environment made for a gentleman with the status of Charles Foster Kane. Only Louis eventually heads for the toilet instead.

But close-up shots also dominate the film, which talks more of the characters' personal endeavor to be re-discovered than presents a social critique of colonial policies. This Magnificent Cake!  does not shy away from including acts of brutality (there's a magnificent bridge sequence in Van Molle story, handled with a powerful directorial hand); still, the film seeks to find understanding even in its worst human specimens. There is a danger in that; a king's funny hiccup can sometimes obscure his detestable behaviour (and history has a long record of colonial oppression for Leopold II); a different puppet design would here help distinguish the rotten apples from the merely lost ones.

The interesting topic of humans colonizing other humans is easily transferred to humans colonizing other animals in This Magnificent Cake! A tender scene between Van Molle and a man-made puppet snail warns exactly of those dangers of allowing others to appropriate you. While some stories feel shorter than they should be (and, yes, the film could easily have been longer), overall This Magnificent Cake! keeps up firmly its tempo throughout its course.

Without being languid, it leaves room for its characters to navigate through their personal journeys, and handles equally well in stop-frame mode abrupt changes and character meditations. If there's any justice in the animation awards world, it should get all the awards it deserves, for it is easily one of the best films of the year.

This Magnificent Cake! premiered at the 50th Directors Fortnight (Cannes Festival), and is included in competition at Animafest Zagreb and Annecy Festival (Special Screening).

Buñuel In the Labyrinth of the Turtles: New Trailer