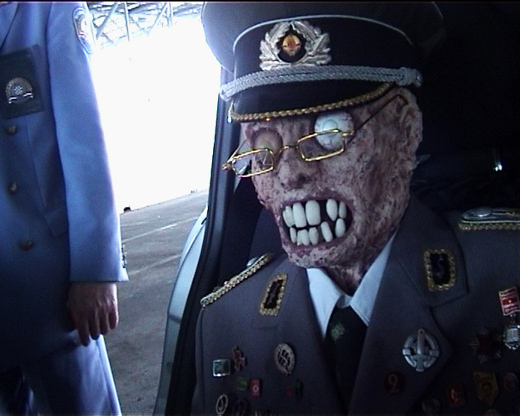 Tito on Ice review: Going Through the Balkan Black Box

Max Andersson & Helena Ahonen direct a road movie on the Balkans, and mix stylistically animation with live-action. Read the film review of Tito on Ice.

It could have been an animated graphic novel, and may be it is. Tito on Ice blog by the Swedish comic artist and animator Max Andersson and the Berlin-based artist Helena Ahonen is an engrossing political road movie to the no-land of former Yugoslavia.

With the promotion of the comic book Bosnian Flat Dog as their starting point,  Max Andersson and his collaborator Lars Sjunnesson tour the countries of former Yugoslavia in a documentary, live-action fashion, but also including animated commentary (objects 100% out of garbage and discarded material).

Their vampire accessory is a mummified Tito, the leader of the former socialist country (died in 1980), who tried hard to make former Yugoslavia hostile both to the Soviets and Westerners alike.

The zombified but now harmless Marshal is made out of styrofoam and papier-mâché; his medals come from Swedish swimming school and his uniform from East Germany. This almost sympathetic Tito prop is a constant reminder of a country no longer united, a country in which war atrocities have come to make its urban landscape desperately similar.

From Ljubljana to Belgrade and Sarajevo, Andersson and his team use the ploy of creative and underground art as the only commenting and responsible agent on behalf of socialist and pre-war Yugoslavia. Contemporary comics artists, animators and musicians, such as Igor Hofbauer, Igor Prassel,  Katerina Mirović, and Radovan Popović are the team's guide to the remnants which are made pieces of art. (A Swedish ambassador to Bosnia and Herzegovina also comments, but refuses to be photographed with the Tito mummy).

Using a grenade as a pencil holder or a surgical knife to draw a comic book page gives a wry feeling of a world now reduced to an archival status. The various mutations of East European Mickey Mouse presented only lead the way to animated absurdity.

Yet, the overriding impression of Tito on Ice is, unlike Andersson's daring One Hundred Years, mostly of an all-inclusive, never-ending black box lost -and nowhere to be found.

The grainy feel object animation provides (a bit of a highly symbolic animatio povera here) also guides the live-action footage:  animated buildings ready for a crucifixion give their places to urban disasters and abandoned buildings with children playing in the courtyard. Animation continues, comments and sometimes exercises its full potential (creating concentration camps is a case in point.)

Rather than being pro-Tito, who is also described as a ruthless dictator, Tito on Ice comes out as a well-observed situation of a pirated world, having no real identity of its own. (The Swedish urban landscape is not spared either in its closetedness). When the black market of cd piracy comes out along the Tito mummy, it becomes clear that nothing original and lawful would ever come out of a puppet.

Tito on Ice is a loose but potent cinematic adventure through time, identity, Balkan music and politics. Unlike Kusturica's films, pace is slow here and less grotesque than its subject matter would invite. Max Andersson's debut feature documentary is almost caring and affective for a land where cockroaches seem to walk uninhibitedly over the pages of a comic book.

Not a partisan anti-war manifesto, but a sincere and suggestive statement of life and art in mummified years, Tito on Ice is more warm in its simplicity than its title suggests.

Rules of Play by Merlin Flügel