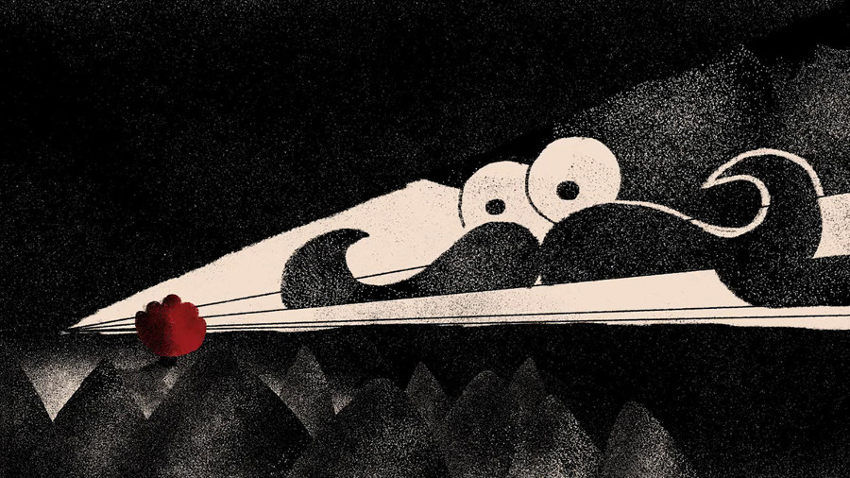 Carlotta, a charming woman now in her 50s, has never remembered a face in her whole life. She even does not recognize her own face. Every morning she looks into the mirror and meets an unknown woman.

This highly conceptual story on prosopagnosia (or face blindness) would seem an incredible feat to make it into an animated story. Yet animation has interesting ways of revealing the impossible.

In Carlotta's Face by Valentin Riedl and Frédéric Schuld (production: Fabian & Fred) , what you can't see is translated to what you can draw. With a distinctive visual style, and armed with 33 international festival awards, Carlotta's Face is now an Oscar-qualifying film.

We caught up with both directors Valentin Riedl and Frédéric Schuld to talk about the project.

ZF: How did you find your subject? Was it through her artistic work or was she an acquaintance?  Did she really want to tell her story to the public?

VR:  I work as a neuroscientist studying the human brain. While passing by a small, local art gallery in my hood in Munich, Germany, one of Carlotta’s self-portraits caught my attention. At first, this picture looked like an accurate drawing of a face resembling the precise pencil drawings of Leonardo da Vinci. But looking closer, I realized that the proportions and individual aspects such as eyes and nose were completely off positioned and unrealistic. Only then, I learned that Carlotta suffers from prosopagnosia, or face blindness. Knowing from my research about the mis-wiring of a specific, face processing brain region, I was fascinated how a brain deficit could lead to such beautiful and captivating art. I then contacted Carlotta and for over three years, I have been following her life.

Her prosopagnosia, as in 99% of all cases, is congenital. In only rare cases, a stroke in the vessel supporting the so called fusiform face area might cause prosopagnosia from one day to the other. The most depressing aspect about this anomaly is rather the social pressure than the personal deficit for affected people. People they don’t recognize would often assume that they were arrogant, or didn’t want to talk to them thereby always assuming something "bad“ about someone suffering from prosopagnosia. Therefore, people affected by prosopagnosia often don’t openly talk about it. Carlotta, however, a few years ago decided to actively confront people she meets with her deficit. It was therefore helpful and easy to work with her.

ZF: Did Carlotta exhibited a 'typical' case of prosopagnosia or her condition is more severe one than most people?

VR:  From a psychological point of view, her condition is rather on the severe side of the spectrum. She even doesn’t recognize herself on pictures. She would say "This woman wears my dress that’s why this was me“. Other affected people might only have slight problems in distinguishing people, e.g., two blonde women in a movie.

ZF: Did you have other subjects and stories that you had to disregard? Or perhaps did you have to cut out parts of her own narration for the film?

VR:  After I had met Carlotta I never looked for other people with prosopagnosia although i learned that several people in my surrounding were lightly affected once I told about my film project. She was such a fascinating character that I didn’t miss anything. For this short film, we first created a brief, audio-only version of the film from much longer interview sessions that I recorded for a feature-version, a hybrid documentary mixing real footage and animation. It is called LOST IN FACE and will be released in 2020.

ZF: How do you actually the two of you worked together in terms of co-directing?

VR: - We first agreed on a maximum length of 5 min for the movie to keep animation efforts in control. I then started with a rough audio version of interesting interview snippets that i recorded with Carlotta. Together with Fred, we then cut that down to the final audio version of five minutes. I then visited Fred in their animation studio several times for 1-2 days when we decided on visual scenes to be supporting the audio. The aim was to create an own world without simply re-telling the sound story. This was a long process of just sketching on simple paper. After that, Fred started filling these 12 scenes with rough and fine animation in his digital pipeline.

ZF: The artistic style of the film borrows from Carlotta's lithographic portraits. Did you study all portraits, selected a few, and then started animating? 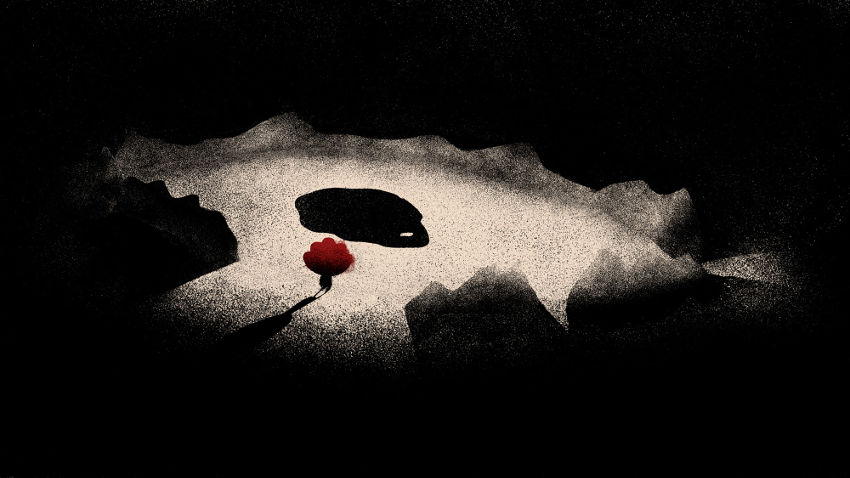 FS:  We looked over Carlotta's self-portraits, which are all quite different from each other, and watched out for basic similarities that we could base our style concept on. Carlotta invented that style of "haptic self-portraits" to recognize herself. In almost complete darkness, she touches her face with one hand and draws her feelings with the other hand in a lithographic process. We watched out for abstract landscape structures, for patterns - we wanted to understand more about her method and at the same time we searched for a ground we could built our visual story on. After a certain time we began collecting only the little details rather than looking at the whole portraits. So basically we found our answer in the smallest pieces and ended up recycling details and painting from Carlotta's work in order to put together completly new images instead of imitating her style. There is only one original full self-portrait in the film - in the last scene.

ZF: I guess in animating, you were digital all the way, imitating the charcoal style. Is this the case?

FS - We used TVPaint and created two custom animated brushes out of the scans of her self portraits. Each brush contained around 80 single frames, that were animated randomly on different triggers like drawing speed, pressure, angle, etc. The grainy structure gace us a charcoal look for thinner lines and for the bigger shapes we used the other brush which was able to spray the scanned particles out like an aerosol can. I drew the basic shapes simply with the lasso tool and filled them. Before deciding for this workflow we experimented analog on different paper structures with charcoal and brushes, compared it - but finally decided for the digital brush workflow based on scans.

ZF: Is Carlotta a redhead? The red color is actually the only color that distinguishes itself in the film, and carries the story along.

V: Actually no! Carlotta is in her 50s and greyhaired. However, she had very colorful periods in her life and the red just perfectly fitted her character. Moreover, the red is a typical red of the color-scheme in her paintings.

ZF: How difficult is it to go from the visual to the haptic in animation? Animation is a visual medium, and you need a strong directing idea, as if almost to negate the function of the medium.

FS: Carlotta's self- portraits contain almost no depth of field or clear use of light and shadow. But in the animation style we wanted to have a different look at her world and explored what hides beyond the shapes and lines of her face, which she herself describes always as a "hilly landscape" she can explore all over again with every portrait. So, we created that depth of field with gradients and simple light&shadow to bring a third dimension in those landscapes. This worked well with our vision of storytelling. Our idea was to give as much volume and perspective to a rather flat style in the original portraits. A very interesting experience for me was to try drawing reverse sided. Many of the shots in the film were drawn and only flipped in the end - like Carlotta does it in her own drawing process.

ZF: Was there a sequence that troubled you the most? Or, perhaps it went all smooth sailing, from idea to research to animating?

VR: After having thought about and decided on the major scenes, we didn’t have to change substantially. However, I remember that we had to re-tell the emotionally strong scene with the teacher to give it a bit more punch. Moreover, at the very end, the red suture rolling of the ball of wool was a bit too thin, so Fred, unfortunately, had to redraw all these images.

ZF: How long did it make you to make the film, from development to completion? Any other people that helped?

VR: As far as I recall, we had roughly 3 months for development with only loose visits, and 3 more, rather intense months for Fred to draw the film. Finally, we had fantastic input from Simon Bastian, who added very fine sound design and music to CARLOTTA’S FACE.

ZF: Why do you thank Wim Wenders in the film?

VR: I started off with the idea of a documentary about Carlotta in 2015, and applied for short film funding that also helped producing the film in parts. In parallel, I worked on a feature-length script about Carlotta where I aimed to mix real footage of Carlotta with animation and visual effects to illustrate her defect and way of seeing. Wim Wenders and his foundation was the first to support my feature concept with development money. As I am an outsider tothe film business, I am very greatful to him that he believed in the idea from the beginning. The feature-production has since then received funding from several German Film Funding bodies and has recently been finished. We hope for a festival release of the feature documentary, called LOST IN FACE, in early 2020. Stay tuned on https://lostinface.film.

Carlotta's Face is an inner visual journey, from sea to the shore, then moving in to the cave of the mind, ending up with Carlotta's home and own court yard. Home is the place you can make something for yourself (such as self-portraits hung out to dry like your own linen). The whole film looks for the home for a face; without imposing fixed boundaries, appearing and disappearing obstacles are more important than fixed walls. In a world of change, Carlotta's narration is structured and guides the film, without imposing visual solutions. It's a film that wants you to go deeper (both visually and narratively) into what it means to look for a concrete identity. A finely balanced and showcased light & shadow composition, and an overall robust handling of individual scenes make Carlotta's face a film you really want to engage with, long after it's finished. 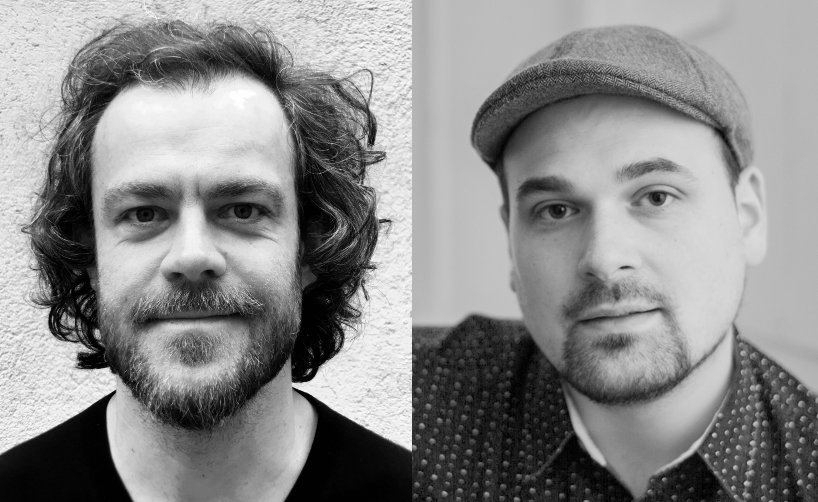 Valentin studied Medicine in Germany, France and Poland. In 2009, he received an M.D. degree from Technische Universität München (TUM), and a PhD in Systemic Neuroscience from Ludwig-Maximilians Universität (LMU) in 2012. Valentin’s engagement with film was a detour from the abstract world of scientific data into a sphere where anything is possible. Today, he aims at merging both fields, science and art, into unique ways of storytelling.

Frédéric Schuld is an author, director and animator. He started working as freelance graphic designer and art director for advertising agencies, before he studied direction and arts at the Academy of Media Arts in Cologne. Frédéric works with a strong focus on animated documentaries. In 2014 he received the Wim Wenders Foundation scholarship with Fabian Driehorst for the development of their first animated feature. Frédéric’s first feature documentary as animator and co-author “Lost in Face” (dir: Valentin Riedl) is currently in production.