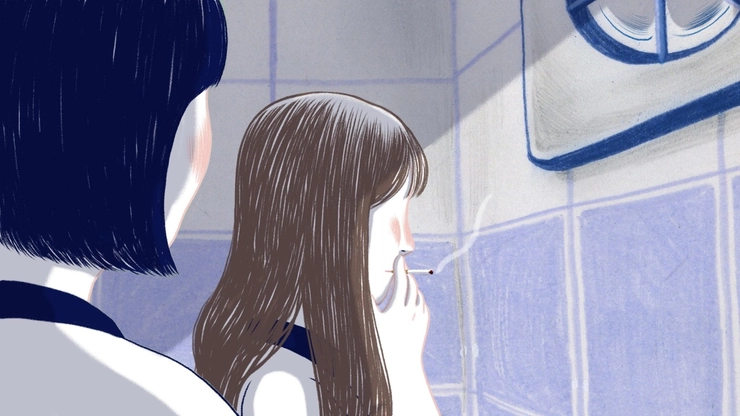 Sura begins with a scene in a bathroom. A girl with blue hair is startled by a spider and tries to step on it, but a red-haired girl picks up the spider. Compared to the blue-haired girl who wonders why anyone would touch something so disgusting, the red-haired girl appears calm and composed. The red-haired girl blows a puff of cigarette smoke and says, “I’m... pregnant.” We have seen and heard stories like this in the past. At first glance, it doesn’t seem like something new. But in this scene that unfolds in the space of a minute before the opening title appears on the screen, the director plays a little game. It isn’t a prank or childish play. Instead, the film begs us to ask a question. At the start of any film, the first thing that the audience does is to determine who is the central character of the story. In a live-action film, the amount of screen-time given to the actors tells us who the main character is, but such is not always the case in animation.

In ​ Sura, anyone might assume upon seeing the first scene that the red-haired girl is the main character. Why is that? the red-haired girl fits the bill. Someone might naturally ask whether it is so
important to know who the protagonist of the story is. In this film, knowing is essential. Because the first thing we see after the title appears on the screen is the face of the blue-haired girl.

The blue-haired girl is reading the poem “Sura” by the Korean poet Baek Seok. Without the reading of the poem, it might be harder to understand the meaning of this animated film. The viewer might assume it is simply a peculiar film that closely follows the perspective of a teenage girl. If not for the poem by Baek Seok, one might think that the film’s message is about respect for life, or the worries and concerns of teenagers. After the reading of the poem, we begin to understand why the spider appeared, why the red-haired girl is hanging from the spider’s web, and why the teacher shows the hand that struck the spider. ​ Sura is about the families that were separated by foreign oppression during the Japanese colonial period, and the sorrow that we feel at their stories. The ​sura, ​or ​asura  , is a warlike demon from Buddhist mythology, and in this poem it is compared to the plight of a people who have lost both their families and
their nation. But if we draw a connection between the red-haired girl and the feelings of the Korean peopleduring the colonial period, the problem remains of creating a sense of empathy for the people’s suffering.

The voice of the girl who read the poem reverberates with the words written by Baek Seok—“palpitating, mournful, heart swelling...” The emotions of the poem, impressed upon the blue-haired girl, are heard as sounds rather than words.

The blue-haired girl began the story as a spectator, but at some point she begins to refer to “herself” and becomes the principal character of the film. If the color of the red-haired girl’s hair changed to blue, it would not seem strange at all. The blue-haired girl has already made her way inside the red-haired girl. If this is easier said than done, ​ Sura offers the answer through earnestness, made possible by a union of form and subject. The point of view shifts to the audience, and the miracle of emotional empathy takes place. It is perhaps all the more miraculous for having been achieved in the short running time of this animated film.

About Jeong Haeji:
She was born in Seoul, South Korea. She graduated from Korea National University of Arts.