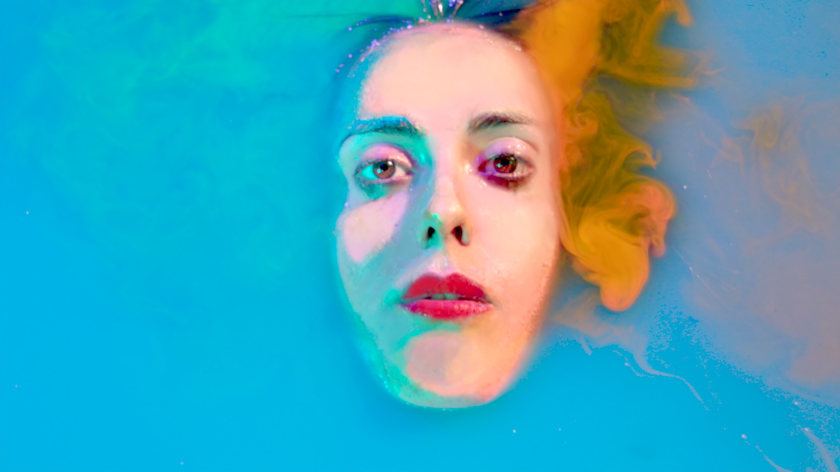 A young woman in her thoughts goes back to the sea to centre herself, in the new film by Sofia ElKhyari, and her graduating short from Royal College of Art. As she dives into the water, she dives under her skin and penetrates her psychological wrapping.

At first, there were the images in Sofia El Khyari's The Porous Body. "When I first started writing and developing the film" the director tells Zippy Frames, "I had strong mental images of water and skin in mind. So I started to experiment around those two bodies -the physical human body and the water body- and tried to find connections between them, and this is how the notion of surface came up."

Sofia El Khyari came in touch with Skin Ego book by the psychologist Didier Anzieu, which supports the claim that psychological troubles materialize into skin conditions. For her, the film shows an anxious woman wanting to penetrate the surface of her skin and explore her inner self in order to heal. "She dives under the surface of the water to calm down, but in reality she dives deep under her skin" she mentions.

This penetration into a skin surface could also be served by stop-motion, but El Khyari chose a mix of 2D animation and pixillation/live-action to get a strong tactile feeling. "I used watercolour not only because it seemed obvious to work with water on the making of this film, but also because it allowed me to create abstract images: the colours of female character mixes up with the backgrounds at some point; to show how she loses the limits of her own body when she is anxious". In contrast, the underwater sequences show a more clearly defined and figurative body -the sense of her identity recovered.

Live-action sequences worked to give clearly the opposition with the abstract/hand-drawn animation, whereas research on actual skin photographs was also conducted at the pre-production stage.

Sofia El Khyari did her own voiceover. "I like using and working with my voice, as I used to sing in the past. Performing the voiceover myself allows me to deliver the text I wrote with the right emotion. On the other hand, actress Marta Reis Andrades was used for the live-action sequences, and that gave the director the opportunity to give the best direction to both her filming DoP and her crew. Yet, the actress was chosen to look Mediterranean; El Khyari comes from Morocco.  ("I described the dreamy atmosphere and the meditative emotion of relief to the actress, and she expressed it very well through her gestures and gaze").

The Porous Body being a student film implied that time had to be used wisely. "I animated and filmed the live-action bits at the same time" El Khyari reports. "But I animated the sequences that were right before and after the live action part at the very end, so I could work better on the transitions between both techniques. Although I had a clear structure for most of the film, some parts of it were improvised, and so I had to work as if I was making a collage.

Her challenges came at the compositing stage, which was tricky, for both live-action and animation sequences needed to flow freely and smoothly. That implied that a lot of time was spent to harmonize both films and colour.

Regarding the sound of the film, it is quite distinctive, with echoes and breaths that look like another actor in the film. "I wanted the sound to have its own musicality, with the voices and the breaths and the other sounds creating their own melody. This is also why the words are barely subtitled because their musicality is more important than their meaning" Sofia El Khyari will explain. The mysterious and intimate atmosphere in the film came out after simultaneous handling of both voice, sound and music, in order to balance the richness of the images.

The Porous Body is a student film, yet it has a long credit list. This is nothing paradoxical for El Khyari, for fellow student contribution (albeit for a brief period) is to be expected in student projects. ("When I would have needed only one colourist for 3 months, I worked with 6 different ones" she reports.  "But I loved working with a team for this film, because it's nice to gather people around an intimate art project. I was also very lucky to have them because of the complexity of the techniques in this film, and each one of them brought more richness and insights on the final output".

Sofia El Khyari's directions to her audience watching the film is to "wash their eyes and ears as the character washes her soul". But she's also aware that when you finish a film, it's not necessarily yours anymore -it becomes people's own interpretation, porous and penetrative. 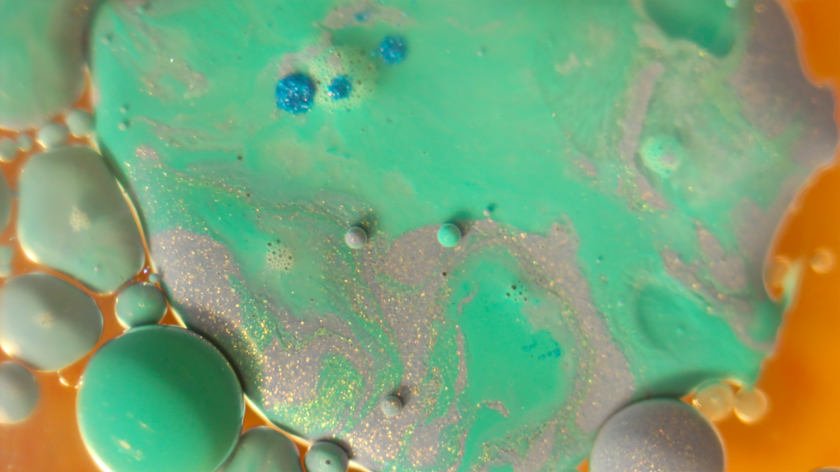 Film Review (Vassilis Kroustallis):
Sofia El Khyari talks about the penetrative, but also embraces the immersive in her visual-aural experience of The Porous Body. Never resting on a single image or technique, the multi-layered film proceeds from watercolors to photography and from color patches to the shiny underwater purple and blue expanses. A young woman in need of her own redefinition both talks and acts to regain her own identity. The body here is more than the pores (minutely photographed and presented); it is also its outcome: the words (in two languages), the echoes, the breaths, a symphony of aural elements that give their way to the photographed human body under water. There is an ease and a smoothness in moving between the animated world and the world under water; there is also a serene atmosphere that El Khyari succeeds in bringing out; nothing is forced, yet something needs to be done. The Porous Body joins the desires of the mind with the actions of the body; this holistic experience it creates is memorable, contrasting but integrating as well, and delicate at the same time.

About Sofia El Khyari:
Sofia El Khyari grew up in Casablanca. She moved to Paris to study cultural management, and learned animation by herself. She directed her first short film and then obtained a Master’s degree in animation at the Royal College of Art in London. Her films have been awarded and screened at various international festivals.