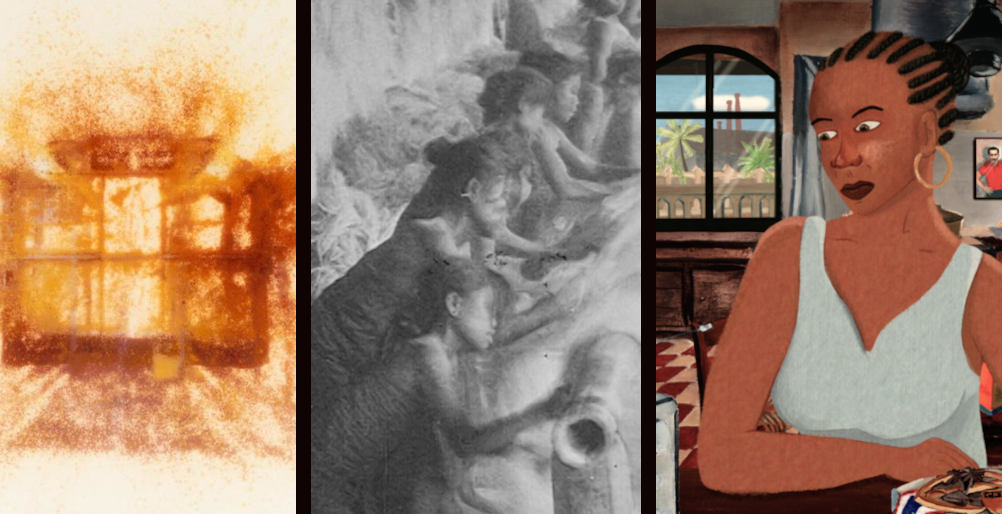 In the talk “The Changing Face of Animation Festivals”, Annecy, Zagreb and Ottawa directors reflected on times, just about twenty years back, when, say, ‘Internet animation’ seemed to deserve special attention-approach, and thus – a separate territory-category; that didn’t last long, however. The immediate question that triggered this comparative recollection was about VR –and in the same fashion they now solidly refused to predict its future, at least as a line-up section, admitting meanwhile that so far, and in this year programs in particular, it does present an interesting-different experience.
This time VR entries turned out to be unavailable for distant onlookers, this author included –and, well, what’s the ‘VR experience’ online anyway… But the general issue seems to resonate across other sections-categories-programs – in the changing face of festival animation, perhaps, as we experience that along the way. What and where nowadays are, if at all, clear-cut framing guidelines set for/by selectors, or traits and facets of the very influx they have to deal with, that can determine more or less definitely certain boundaries and classification-distribution of content within or across sections-tiers (other obvious-inevitable programming considerations
aside).
That goes, for starters, to the entries probing the core properties, or balancing on the edge of the medium; but not only.

In the main competition, there were few entries of quite edgy nature that could’ve been easily relegated to a more specialized playground – like Off-Limits, in Annecy programming context ('Concatenation, 1 and 2'; 'O'; 'June Night', and maybe, to an extent, 'On Time'). And even in Commissioned competition: for instance, 'Polymorphia' (Vladislav Parovozov, Russia) – a fast-paced collage of and on pan-transformation of all the matter(s); moreover, without direct-obvious ‘applied’ connotations, though rather impressively energetic as it is.
In Off-Limits proper, though, a good half appeared – it might be embarrassing to confess, but maybe somewhat too-too edgy – for my taste, or maybe for the very concept of the art-form still in place for many. Those films in question looked too close to ‘new-media’ exercises and self-centered in that; testing just the matter of digitalized visuality and not reaching out from their own limits. Or making if only a slight attempt on that: like in 'There Must Be Some Kind of Way Out of Here' (Rainer Kohlberger, Austria) – a deconstruction of Hollywoodish poetics of (global) catastrophe through invasion of grainy pixels eating up completely an already barely recognizable ‘reality’. On the other hand, in the same program: 'Cause of Death' (Jyoti Mistry, South Africa, Austria) – a pretty sharp, socio-cultural-journalistic essay on ‘Femicide’, through found/archival imagery of female body/representations/exploitation and such, with bare minimum of animated devices proper in that, but rather with free-willing play with and around the ‘doc’ material, by now all but conventional in this vein - and all but mainstream at cross-genre and strictly doc festivals (and in fact this film showed up at a number of those, even with awards).
There is also an issue, though, of ‘doc’ as a component/facet in animated film if not of animadoc/docuanima as a sub-genre in its own right. In 'Maalbeek' (Ismaël Joffroy Chandoutis, France), also Off-Limits, straight-forward-plane TV reportage footage/stills of terrorist bombing in Brussels metro train interlace with heavily, again, transformed, almost to the point of pixely abstraction, imagery of supposedly the same event – but as though in/through the mind of amnesic survivor, looking for clues in that escaping reality. This juxtaposition appears here ‘motivated’ – as the heroine notes beyond the screen: ‘…I’m trying to fill the emptiness with images…’ – and convincing, perhaps exactly by the instrumentality of dramatic contrast, in the core of vision.

In Perspectives too, we find a number of semi- or kind of docs, albeit probably less ambitious and characteristic, though modest-decent, in my account. Here, as a rule, or maybe current genre prerequisite, real-photo representation of heroes and sometimes events would appear, usually at the end – framing the story appropriately, but without much of shaping it through meaningful strong form. Choice of style and tone in any case would probably play the major role. And so, out of this line, I’d pick perhaps 'Bad Mood / Malumore' (Loris Giuseppe Nese, Italy) for tasteful design and, yes, mood – well measured at the face of suffering of elderly-home inhabitants and their helpers.
Verging on that is here the certain cluster of films with, let’s say, socio-historical focus. In one idiosyncratically telling example, 'The Happy Version of Eden / La copia feliz del edén' (Samuel Restucci, Emilio Romero Arancibia, Chile), on the final credits there would be a bit of ‘making of’ – team, source materials and drafts – and those as if stand/substitute for ‘reality’ here and in that give all but stronger impression than fully-cleanly drawn and aggressively edited but still too conventionally familiar account of infamous coup and tragic death of the president Allende. And I haven’t fallen exactly for the awarded 'Clara with a Mustache' (Ilir Blakcori, Kosovo) – with all the seriousness of the theme, refugees and victims of Kosovo war, too plainly computer design, too streamlined narrative to me, which might be a matter of taste(s), after all. Within this kind of discourse, I’d probably relate more to the humbly half-pronounced messaging of 'Y'a bon?' (Marc Faye, France), like just a sad shrug on the false historicity – idea of ‘benefits’ of French colonization being legitimized anew – in a truly post-colonial gesture; interiorized thought-emotion amid specters of the past, given in similarly reserved quasi-traditional aesthetics.
Then there are a couple of films of more directly politicized nature, with immediate purpose to raise a voice. 'The Enigma of Faina / Fainanın sirri' (Durna Safarova, Azerbaijan) doesn’t seem to have much of extra artistic ambitions, with its naïve simplified look and pace, just whatever it takes to spread the word on yet another civil activist silenced and let perished in prison. While 'Magutny Bozha - Prayer for Belarus' (Yulia Ruditskaya, Belarus), obviously driven by ongoing ugly-tragic-heroic developments in the country, does aspire to visualize sort of protest anthem, along the music piece, in broad strokes, full of pathos–going all the way, with the strengths and limitations such a path entails. (Curiously or characteristically, by certain contrast, in special program WTF2021 another couple of even sharper politically charged entries, in music clips mode, "Satellite Jockey & 'Paix sociale'" (Rémi Richarme, France) and "A.C.T. Madrid & 'Infected'" (Alfonso Moreno, USA, Spain), on hot actuality with its leading figures or/as figureheads, display much more sarcastic-brazen view-commentary in corresponding rough-and-cut stylistics.)
Finally, there are few films worth attention on different – shall I say closer to professional- artistic proper – merits. 'A Boy I Never Knew' (Daria Dedok, Belarus, Czech Republic) – an attempt on introspection through restrainedly stylish interchange of visual and verbal tableaus, jazzy and intent at the same time. 'Abandoned Village / Mitovebuli Sofeli' (Mariam Kapanadze, Georgia) – a landscape in single-shot bird-eye view, changing elusively with lighting-seasons, to the extent of almost changing-probing the matter of visuality itself; besides thematic connotations, likely emotionally dense for authors, it’s in fact a pointed experimentation in its own right, if only a bit longish. And then especially – 'The Fourth Wall / Divare Chaharom' (Mahboobeh Kalaee, Iran): also taking experimental in essence risks, exploring, a bit awkwardly but bravely, space-relation between 2- and 3-D in texture-picture-objects-interiors; and through that, weighing-guessing metaphoric power of technics, – also, of course, gender-family tensions-roles, if not the order of things on broader scale.
However, of the programs as such, in their entirety, this time to me Commissioned looked mostly even and solid, and engaging, thought-provoking, offering perhaps a teaching angle for the rest: don’t we all know well from the history of arts and letters that at times exactly formal restrictions and pre-set framing, albeit of ‘applied’ nature, can serve for the better, both disciplining and liberating (not a paradox) the creative flight.
Here we find things interesting in diverse aspects. "TED-Ed & 'The Rashomon Effect'" (Jeremiah Dickey, USA) – not surprisingly, these days of ‘post-truth’, and docuanima expansion for that matter, even a popular-science-like analysis of this ‘enduring cultural metaphor’, as annotation goes, appears moreover topical-timely. In fairness, the voice-over narration sounds, by understandable reasons, a bit too popular-plain, but the visuals instead offer much richer and more ambiguous frame – exactly by framing the notion-metaphor in good part through cinematic, and animation too, apparatus per se; an insightful move indeed. 'Moholymotion' (Éva Darabos, Hungary) – sheer elegance in fittingly stylized and extra laconic introduction to László Moholy-Nagy: life-work-heritage, all in one within just two minutes; ultimate animadoc, if you will. Of music videos: "Gala & 'Parallel Lines'" (Nina Paley, USA) – no less elegant in its reserved poly-stylistics (including, interestingly, objects in mild collage with drawing), holding-running an equal line, truly parallel to the song. And of festival trailers: probably for Zubroffka (David Stumpf, Poland, Slovakia) – dashingly witty-fanny, anything goes, and you must too, exercise or/and please yourself in all the skills and drills until or after bison calls… Well, maybe that’s  what actually stands for the changing face of animation festivals… Refuse to predict, though, keeping in line with bigshots.
P.S. Perhaps, it makes sense to compliment these selective notes with some impressions from special programs. Namely, from the extended tribute to African animation – in focus this year in Annecy. Few films here caught my eye, if not exactly quite new, then probably still underexposed and deserving a closer second look, especially in light of general picture and issues on my agenda.

First, from Carte blanche The Animated Greater Maghreb program, 'Diaspora' (Alaeddin Abou Taleb, Tunisia, 2015) – a weirdly peculiar take on puppets, moreover that slightly mixed with drawing, in materiality and metaphorics, a head in/on a wheelchair amid the densely filled interior; and attempt on not quite conventional social parabola, with identities and physicality both in question.
Then, from Today, African animation selection, 'Machini' (Frank Mukunday, Tétshim aka Trésor Tshibangu Tshamala, Congo, Belgium, 2019) rather acclaimed already, but still, despite some weakness-plainness in narrative, strikingly fresh in dealing, again, with the material tropes, so to speak: the very choice of stones for object-type or semi-puppet technique for, indeed, object lesson on ‘materialization’ of speech, for tangible critique of many things thus revealed, from colonial to ecological, to historicity of civilization. Ash to ash, dust to dust…
Then also in the same panorama two pieces by South African director-artist Naomi Van Niekerk. Her first film, awarded in Annecy in 2016, 'An Ordinary Blue Monday', a crispy sober yet strangely tender remark on daily violence and death, in graphic sand/silhouettes; and the second, 'My Mamma Is Bossies / My mum's bonkers' (2017), milder in theme – of mother-daughter tensions-passions – yet still intense in emotion, similarly demonstrate tactful understanding-mastering of basically the same trademark technique (interestingly, she considers herself a puppeteer with that) and kind of inner feel of its semantic train – essentially, I’d note again, the inspiring discipline of form.

Facing brave new or good old media, I keep mumbling to myself a mantra I happened to somehow articulate probably in my very first writing in the field, some three and half decades back: this is a technological-metaphorical art-form par excellence, in a sense that these facets here, as nowhere else, perhaps, are inseparable and intertwined, to be realized though each other. Still believe so, for better or worse.
contributed by: Mikhail Gurevich