The 14th edition of The Piccolo Festival dell'Animazione has come to it's end and these are the winners.

On a rainy and cloudy day, but full of enthusiasm to know the PFA winners, animation lovers and special guests gathered at the San Vito al Tagliamento community auditorium to celebrate the last and main event.

In the Main Competition, the winner of the main competition of the PFA14th edition was "Hide" by Daniel Gray, a co-production between Hungary, France, Canada (CUB Animation, 2020). Daniel Gray also was behind memorable films such as 't.o.m'. or 'Teeth', which was multi awarded in the past and has more than 10 million of views on YouTube. "Hide is a film that explores the modern version, where you chat and see everyone digitally every day; and the feeling of being apart is more hidden and harder to pinpoint. But it's there". In the artist's own words.

Jury statement: An impeccably executed film that, through an exciting story, manages to be both personal and universal.

The film winner in the new competition Green Animation was for "A Film about a pudding", by the Danish Roel Van Beek (the National School of Cinema & Television, 2021).
Jury statement: Godzilla in a similar allegory, but pudding version. The rhythm, the aesthetics and the irony, simply brilliant .

The Special Mention in the same category was for "Orgiastic Hyper-plastic" by the very well known UK director Paul Bush (2021).

Jury statement: For the relevance of this inventory where the whole returns a joy without moral discourse and the innocence of the plastic objects of childhood become threatening. 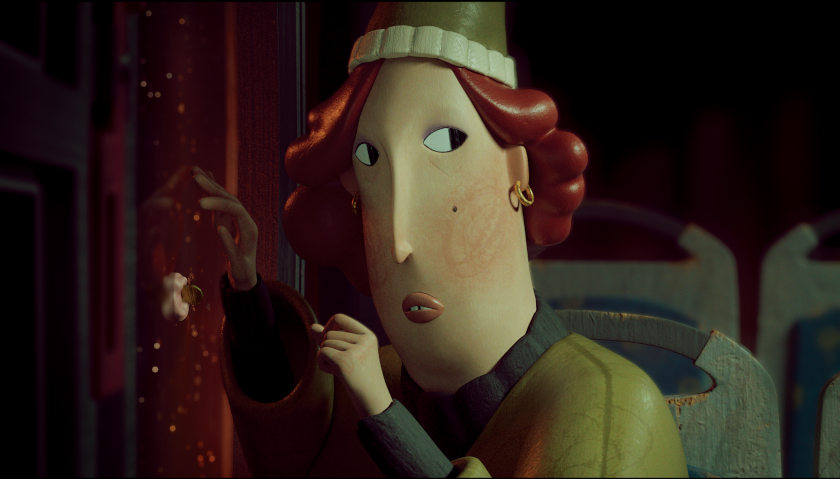 Jury statement: For the simple immediacy of representation in a few minutes of a large separate humanity: effective in the setting (and in the cutting of the scene) in one of the most usual places in everyday life; direct in the psychological description of the characters; fragrant in the use of animation.

"Budé boty" by Anna Podskalská won one of the special mentions in the Opera Prima competition.

Jury statement: For the skill in drawing, for the "cinematic" quality of the narrative development and the sequences with which all the suggestion of the great tradition of the popular fairy tale is returned.

The second special mention was for the polish film "I'm here" by Julia Orlik, who this year was in our zippy pool of the young women animators to follow in the future.
Jury statement: This short film tells a dramatic reality of life with an unusual sensitivity for a very young author who also demonstrates that she already has a full understanding of the expressive and technical possibilities of animation (the choice of the fixed camera on the protagonist and the "always out of focus "Of the loving care that takes place around her).

The honor guest William Kentridge's "City Deep" film, won the competition Art & Animation.
Jury statement: A reconfirmation of the magisterium of this author that makes us perceive the visual space of time stopped, as he wants to believe that the possibility is open that we will be able to move forward with an ethical conscience.

The VISUAL & MUSIC section sees as the winner "Sous la peau l'écorce (Under the skin, the bark)" by Franck Dion (Unifrance 2021). An impressive exercise of imagination and visual style.

Jury statement: We really liked the main idea as well as the beautiful creation and the original intervention by a character voice that overturns the fate of the protagonist rejected by an invisible production.

The VISUAL & MUSIC Special Mention was for the Polish "Roz-Poznanie (Discernment)" by Przemysław Świda (2020)
Jury statement: For the mesmerizing repetitive crescendo that uses the central character as a tool, giving this partition an infinity of transformations.

Meanwhile The Animayoung award was for "Mulm" by Carol Ratajczak & Tobi Trebeljahr, decreed by the jury composed of Simone Galfano (class 5B) and Lara Controne (class 5F) of the Sello di Udine.


Jury wrote: Because it was the most complete and well-thought-out, at a formal and plot level, among all the shorts presented.

The Public Award was for “Migrants” by the students of the 5th grade in animation 3D of the Pole 3D school, Hugo Caby, Antoine Dupriez, Aubin Kubiak and Zoe Devise. This is a film very much awarded in the past months, certainly for his strong message but also for the well-developed story telling and with a very good visual execution.

The Animakids competition was for "Sound between the Crowns” by Filip Diviak (Tomas Bata University in Zlín).

The PFA 14th edition has ended but as always, it leaves behind a bunch of big winners, first-rate events and a visual education in the animated art that helps to improve the audience and audiovisual industry in the northeast Italian region.

Remember that the exhibition Waiting for Kentridge will be there, until December 10th in Moroso outlet design.