Signe Baumane’s ‘My Love Affair with Marriage’ had its European premiere at Annecy 2022; this remarkable animation director left France with the Jury Distinction for a Feature Film. It is an intimate and honest, ironic treatise about the complexity of human relationships, delivered as an animated musical that also draws upon a form of a scientific film. I talked with Signe Baumane about the film’s unusual genre and its specific aesthetics but quickly we have come across concerns related to humanism and feminism.

From an early age, songs and fairytales convinced Zelma that Love would solve all her problems as long as she abided by societal expectations of how a girl should act. But as she grew older something didn’t seem right with the concept of love: the more she tried to conform, the more her body resisted. A story about the acceptance of the inner female rebellion - Film Synopsis.

We met in the morning on the fourth day of the festival. At that moment, Annecy’s attendees start thinking about how many professional meetings they can still squeeze into their calendars, would they manage to reserve the tickets for the screenings they had missed, which parties to choose, and how to arrange a shuttle… But Signe Baumane had another kind of duties on her mind. Each morning, Baumane and her creative partner, Sturgis Warner, were meeting at the big lobby hall of the main festival venue, Bonlieu theatre, to create blue-yellow flowers with crêpe paper. Given to the passers-by (that is, to those who cared to take one), the flowers were meant to be a token of support for Ukraine and a reminder that an atrocious war, waged on the independent state by the Russian Federation, is ongoing and no further than 1800 km away from the Annecy’s fairy-tale.

Baumane, being a Latvian citizen, born in the USSR, and living in the USA, knows better than many in the art-house animation world, how the imperialist dictatorship functions and how easily one falls for the propaganda (specifically, those who look at the state of the things from a privileged geographical distance). And Baumane is fully aware of how the ideology feeds itself on sustaining, reproducing, and remolding of the patriarchal order – a perfect model of oppressing an individual by the dominating other.

While this conversation does not touch upon the subject of the war directly, one has to remember that personal is political. If there are readers who do not yet fully comprehend why the Ukrainians so fiercely resist subjecting to the post-Soviet vision of world and social organization, gender roles, functions of the culture, and meanings of independency, it is advised that they watch Signe Baumane’s film as soon as possible. The answers are there – plain and simple, and the powerful political resonance of this film is undeniable.

Watch the trailer for 'My Love Affair with Marriage':

ZF: It is an unusual decision to make an animated musical. Why did you choose this form for ‘My Love Affair with Marriage’?

SB: It all came out as a necessity required by the story. I didn’t intend to make a musical when I thought “Oh, I want to make a film about my second marriage” (I was married to a gender-bending man and I felt it was a very fascinating story). I wanted to examine why did we want to marry, or – why we, the people, want to marry at all.

I had to go all the way back to the origins: where and when, did I ever first get this idea of marriage? Suddenly, when writing the script and having the characters, they just started signing. What is love and how to handle it?; how to be a woman?; how to be a man?; and why marrying … ? – very often the drive comes from pop culture which makes these ideas very sexy, very appealing. With songs and dances, you want to conform, not because you’re forced to, but because they’re so glamorous and beautiful: “I want to love this way”, “I want to marry that way”!

Animation and the musical are both very stylized forms of storytelling. It’s an unusual decision in independent animation because it’s so expensive. We made a film on a very low budget, I don’t know how did we manage with 30 speaking and singing characters and 200 non-speaking ones, that’s a lot! It took seven years to make it right!

ZF: As in ‘Rocks in My Pockets’ (2014) you combine 2D animation with three-dimensional, hand-made surrounding sets as if you were waiting for the puppets to appear. How did you arrive at the idea of blending three-dimensional surroundings with flat drawings?

SB: You know, it’s just that I’m a 2D animator for my whole life, it never occurred to me to do anything in 3D, and digital 3D didn’t appeal to me as a style. And then, sometime in 2009 or 2010, there was this fashion designer in Italy who liked my animation work. He invited me to Milan to paint a mural. So, I came there, he paid money, it was a good experience. And he said, “Mural is a mural, but I would like you to do three-dimensional sculptures from papier-mâché”. I’ve never worked with papier-mâché before, but, well, sometimes everybody is doing something three-dimensional, hand-made! And then he said: “They have to be big, nothing tiny, something of a full human size”. I do anything for money, so, I did make 30 sculptures. And when I was making them, it felt really magical. I had the ability to build something so huge, I was able to think it through. In the end, they looked amazing, and I thought: “I can bring that into my work”. 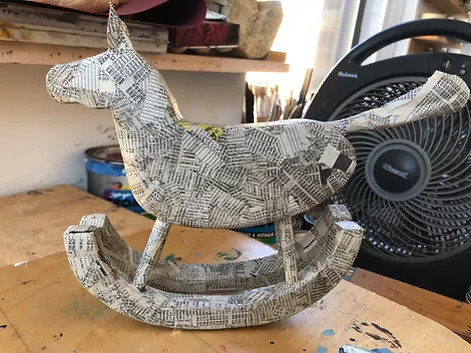 papier-mâché rocking horse from 'My Love Affair with Marriage'

Papier-mâché breaks down and I don’t know much about the puppets. Stop motion is a very difficult art on its own. If you don’t have experience, you’re not going to achieve anything in a short time. And I thought, “Well, what if I make a three-dimensional background and then I draw animation on top of it”, and so, I experimented until I settled on a certain look. After I made ‘Rocks in My Pockets’ with this technique I wanted to go further. My partner Sturgis Warner, who has carpeting skills, helped build the sets. Yasemin Orhan and Sofyia Lypka, my assistants, helped finish them. And I was just animating. The origin of this idea is a kind of an accident or a discovery that came from an accident.

ZF: Realizing that ‘My Love Affair with Marriage’ as well as ‘Rocks in My Pockets’ are both works of fiction…

SB: Yes, these are not documentary films.

ZF: What I find very precious about these films, is the fact that you are honest, self-critical, and aware of your own shortcomings. At the same time in both films, there is a strong emphasis on factors that predetermine people’s actions – nothing divine, but rather genetics and hormones working within our organisms.

SB: But in my personal view our biology is not our destiny, I don’t believe in predetermination. I believe we do have a choice to make changes. That’s why we have a prefrontal cortex. Yes, the instincts come from the amygdala, and that’s predetermined, but our prefrontal cortex allows us to analyze that and overturn the actions. I can change, and so does the society around me. We might like the changes – or not, we might be driven by the prefrontal cortex – or amygdala; and it’s interesting to think in those terms. As humans, we live in a space between neurobiology and societal constructs which we have built. 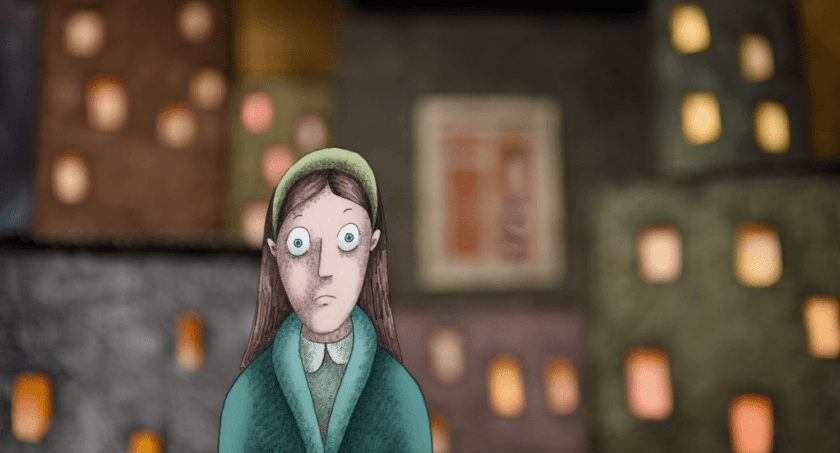 ZF: Not sure if you’d agree but in one of your early films, ‘Tiny Shoes’ (1993), I think you’re dealing with quite the same subject. The princess-to-be character from ‘Tiny Shoes’ and Zelma from ‘My Love Affair with Marriage’, both learn to embrace the societal system in which they grew up. To achieve this, they have to learn about the limits of what can be embraced. Later, perhaps, it might be possible to free oneself from the system.

SB: This is something that I am very much interested in examining – the relationships between the people. But I think that ‘Tiny Shoes’ shows just one way of looking at things, while ‘My Love Affair with Marriage’ gives a more complex view. ‘Tiny Shoes’ is a fairytale, a violent one, and not necessarily feministic. The character there knows what she wants and what she has to do to get it. And there’s no other way.

ZF: Zelma learns how to free herself from the system, while the character from ‘Tiny Shoes’ seems to be satisfied with being a part of it. She could be one of the singing sirens from ‘My Love Affair with Marriage’ (the characters that control Zelma and impose societal expectations on her).

SB: Yes, she can be one of them. I’m interested in the theme of how women internalize the rules of patriarchy. It’s just mind-boggling sometimes – women who teach their daughters how to suppress other women so they wouldn’t stick out and change the rules. The history of patriarchy is so long and so dangerous. A fear was set upon women who were different, brave, who stood up. This fear is so strong, it’s almost genetic: don’t break the rules because you can pay with your life.

ZF: I’ve heard comments about the film that it is a harsh take on manhood while in fact, you are actually harsh on women.

ZF: There are plenty of layers of feminist interpretations of the film but it is not an example of an agitating, feminist cinema.

SB: Yes, I hope I haven’t made a propaganda film. I have a strong allergy to propaganda, simplifying characters, to just illustrating an idea… The only ideology I feel in this film is humanism. We’re all confused. And we all want the same things: we want to love – we want to be loved. We want to be accepted the way we are. And this is the message: searching for yourself and your place in society; trying to find love and not being able to find one because of certain rules set by society. And another theme that is important to me: inequality between genders which breaks the intimacy – when one gender is made to believe they’re better than the other. I do believe that reaching through intimacy is like a magical ingredient to fulfill life – when you’re connected with other people in a meaningful way.

ZF: Sergey, Zelma’s first husband, was brought up to think that he was superior. But in the relationship with the second husband, Bo, it is Zelma who cannot stop herself from reproducing the oppressive patterns.

SB: Yes, but this happened because Bo held a secret from Zelma. He was too afraid but if he took a chance, there would be a space for intimacy. But he did not, and so, they were not equal: Zelma couldn’t understand what are the common grounds and she started seeking familiar patterns.

ZF: Your films are as engaging as great novels; you go much further beyond just styles and techniques. You have a message and a concept brilliantly conveyed in a medium you’re most familiar with.

SB: For me to tell a story means to be alive. I do make films to connect with other people, it’s not therapy, it’s hard work, and I’m not doing it for myself. Telling stories is like breathing.

'My Love Affair With Marriage' is a co-production between the US (The Marriage Project LLC), Latvia (Studio Locomotive), and Luxembourg (Antevita Films). It had its world premiere at Tribeca Film Festival.  Next stop, Karlovy Vary International Film Festival (1-9 July 2022). Represented by New Europe Film Sales. 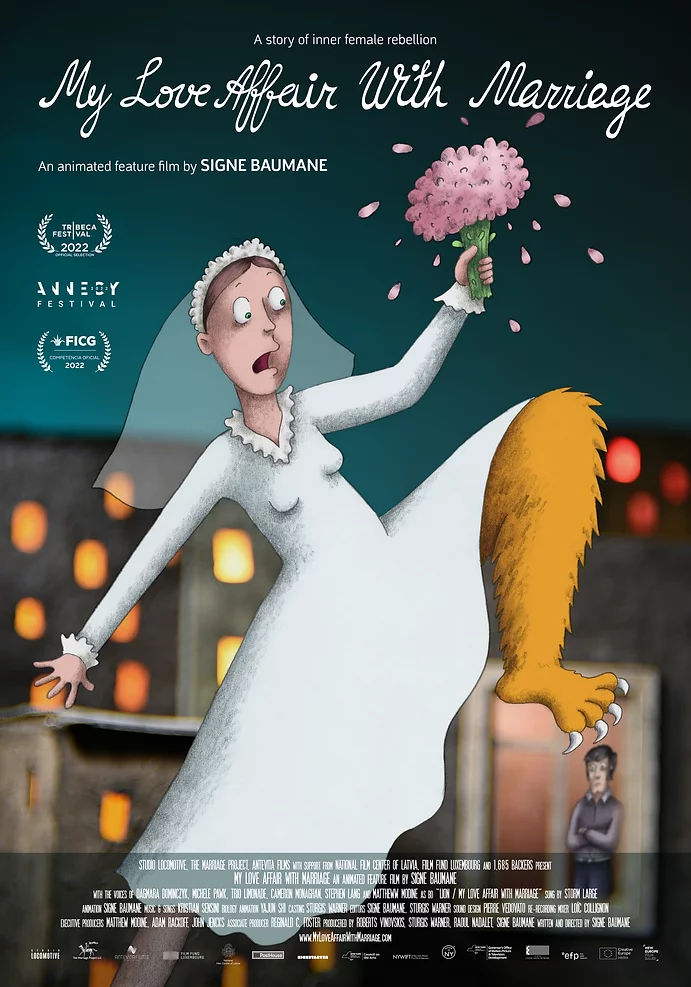