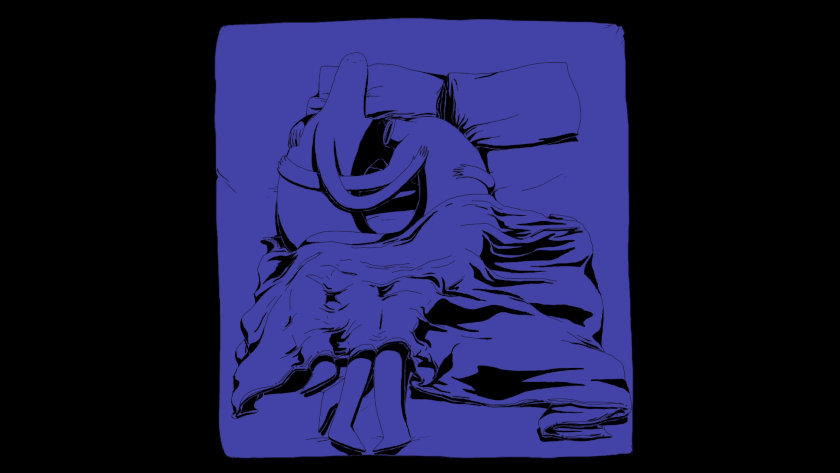 The fear of being overwhelmed by the outside world can almost literally make you use your head. Ala Nunu crafts a 2D animation short on fragility, solidarity and separation, called Ahead. She talks to Zippy Frames

AN: The idea for the film came from asking loads of questions and the film is my way of processing these questions in a nonverbal way. What would happen if you cared a lot about someone who is perceived as not full, broken, and who is not necessarily ready to be “fixed”? What if you decide to do everything for that person and fix them for themself? Would that work? Can you fix something that doesn’t want to be fixed? What if you would bring them something that you are sure would fix everything… but it doesn’t help at all? Is that helping the other person or rather yourself?  I knew that I wanted to create a simple but compelling story about people being with people. I wanted to talk about the inability of taking action, told from both the side of the person experiencing it, as well as the person who is sharing a life with someone feeling that constant fear. What if you bring a head to a headless person? Will they be full again? My goal was also not to impose my understanding of the story, but leave the field to individual interpretations.

Watch Ahead by Ala Nunu

ZF: Did you proceed with the traditional script-storyboard-animatic etc. pipeline or you improvised scenes, storylines?

AN: I started coming up with unconnected scenes that intuitively felt part of the story. Then I edited the ideas down to create a surreal yet intimate enough world. I believe that visual arts allow us to communicate without words. This is why I chose not to include any dialogue, to put emphasis on the experience of watching. AHEAD is filled with itchy emotion-shapes and to get to the bottom of things, one has to cross emptiness, endless river, and a pink jungle. (See how silly that sounds when put in words?)

ZF: Why did you decide for these thin, tall, tube-like characters in terms of character design?

AN: I wanted to create fragile humanoid characters that would allow me in a simple way to express complex emotions and found this design to be suitable. I love how their sensibility was underlined in the sound design by Ed with the ceramics like tactile sounds.

ZF: Do you separate your characters as male and female, or is that irrelevant?

AN: I like my characters gender neutral, thinking of them as a generic human form. (Lately I have been questioning more and more where does my image of a generic human come from and whether  stories can be told without the background of who the individual person is and what they were shaped by.)

ZF: Your characters seem to adopt each time the color of their surroundings. Was that intentional, and how did you structure your color palette?

AN: One of the goals I set myself when making this film was to see how much you need in order to perceive a story as a continuity? How many elements of space do you need to represent to keep the consistency of the surrounding? Can you put a random vertical shot in the middle of a short (for this one it turns out the answer is "no", but I had to test it for myself) ? Can you change the colours in almost every shot? I started by creating each individual shot as I felt it seemed right. After finishing the thumbnails for every shot ,I adjusted them to create a coherent colour script (see below). I wanted each shot visuals to tell the mood of what's happening. I don't think the characters adapt to the colour of their surroundings. I think that's more like "the way the camera observes the situation adapts to the mood of the situation". 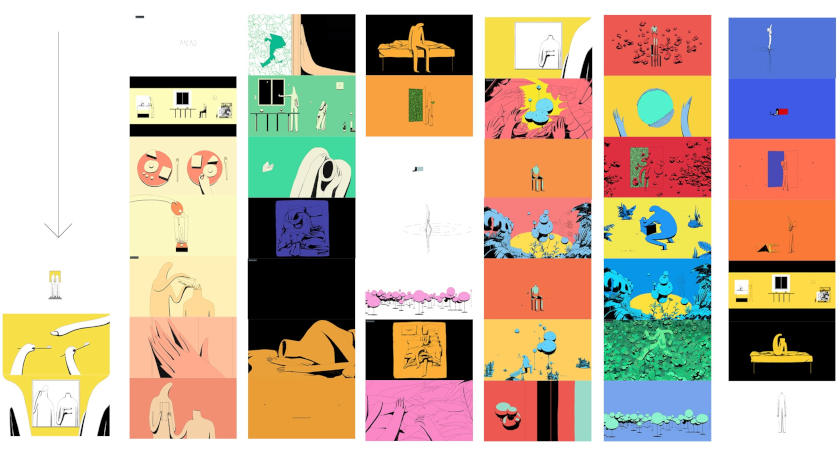 ZF: Since this is a student film, how was your experience with your collaborators (for instance, music and sound design)?

AN: From the beginning of the project I had a strong idea about the role of sound and the key was to find good people to collaborate with on it. The musicians and composers I had the pleasure to work with are Natalia Czekała and Krzysztof Guzewicz - polish folk-jazz musicians, founders of T/aboret band, which I had met while working on a music video for them a couple of years prior . Big part of working with them was based on long hours of sharing ideas on how each of us understands the story and the characters needs. I enjoyed it very much. For the sound design I was paired up by the RCA with Edward A Guy, a great NFTS' sound designer. We didn't manage to achieve what we were hoping for on the school allocated time frame, so with the help of COLA we financed the finishing touches. Edward brought to life my silly sound ideas and truly made this world real.

ZF: Why Ahead and not A-foot or A-hand? Why the main 'disability' here being the head?

AN: I was thinking of something that cannot be missed. That everyone would think "yup, that is broken". And then allow the space to question whether "that broken thing" actually feels broken. 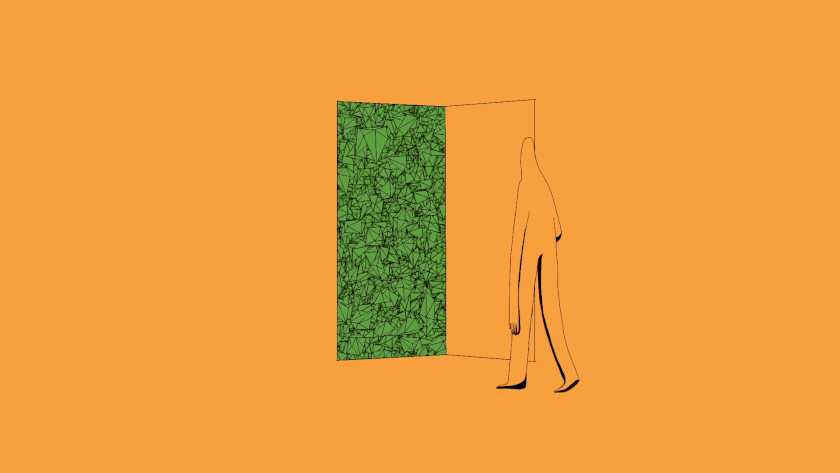 Film Review (Vassilis Kroustallis):
Elongated figures have long storylines in Ala Nunu's affecting Ahead. Even the frame itself (squared in their bedtime hours, widescreen in their morning breakfast time) needs to feel and fit in with characters that can be as close as separated. Not having a head is not a problem in itself in Ahead's universe in practical terms; yet this absence will in its turn invite the outside fears to give a severe headache nevertheless. The need to move beyond fears leads to separation, and the crosscutting between the two characters and their different dramas only accentuates the fact that sophisticated solutions and patchworks really miss the point.  Heads are being constructed as round as they can be; they can be squared as well, yet the basic elongated structure in the film simply won't fit them. The search for a head is almost an exotic one but still empathetic, accompanied by breathing and a music that steps in the help the one character; at the same time, the character at home still needs to abandon the safe haven. This search for alleviation and comfort is constantly redefined in the film's ever-changing color profiles; yet the need remains the same in this beautifully compassionate and almost intoxicating animation short.

About Ala Nunu
Ala Nunu Leszynska, born in 1994 in Poznań Poland, currently based in France. Studied at University of Arts in her hometown, Royal College of Art in London and La Poudriere in Valence, France, but still only holds the title of BA in Animation from Poznań UAP. Independent animation director who worked for inter alia OnBeing, London Natural History Museum and The Atlantic. Currently directing, art directing and animating with international production cooperative COLA.