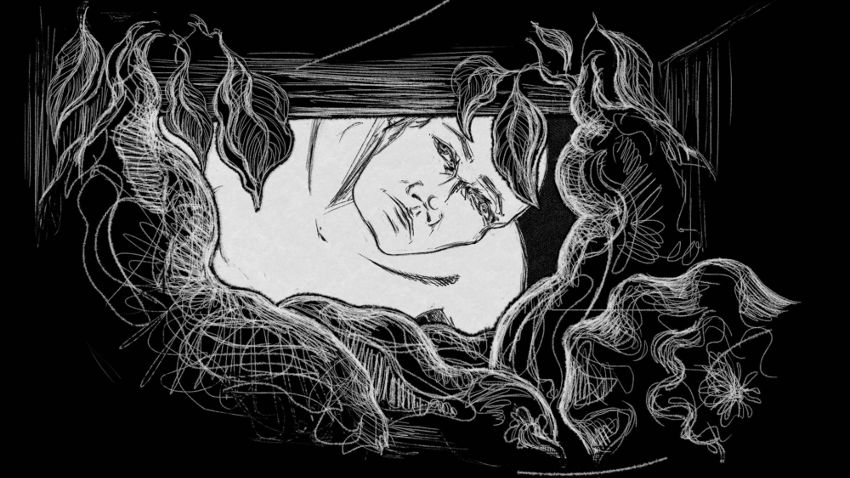 In her first year film from Royal College of Art, UK, Natasza Cetner  focuses on how the grief impacts our perception of reality and how we tend to hold on tight to dreams that will never come true.

The 2D animation film Baraa  started when Natasza Cetner During started looking at stories about mandrakes in different languages and found that “baraa” was a name found in Flavius Josephus’ "Jewish Wars”, with a enigmatic ring to it.

ZF: How did your theme develop?

NC: The theme of mandrake developed from the researching the main concept of the film which is acceptance of grief and the human reaction to miscarriage, stillbirth and the general concept of loss.  The stories of mandrake root’s special abilities can be already found in the Bible where it helps Rachel conceive Jacob, but then it keeps reappearing in centuries-old stories in cultures all over the world. Nowadays, people mostly associate the mandrake with the one found in Harry Potter, although I’m happy when people think of Pan’s Labyrinth  by Guillermo del Toro who actually introduces the creature in the context of infertility and its healing powers.

ZF: Was it something you had in mind from the beginning, and how the project evolved?

NC:. Since the beginning I wanted to create a film based on a story of one woman from my family who was struggling to conceive a child and her dream never came true. The film was supposed to show the respect towards grief and empathize with those who are stuck in the mindset of loss. As I have been always fascinated with folklore and mythology I decided to step away from literal representation and narrative into more ominous dream-like nightmare loop, with strong metaphorical symbols and distortions to explore more the “inside” view of the film, rather than exterior observation.

ZF:  What films or visual references did you have in mind when making the film? It looks very particular.

NC: Some people keep comparing my film to Eraserhead by David Lynch in terms of grotesque and overall mood, but to be honest I actually watched it finally after hearing all those comments, and I must admit that it is really weird as now my film does look like I was heavily inspired by Lynch.

In terms of visual references I would rather mention certain illustrators than animators although I simply adore the animation style of RCA alumni Laurie J. Proud and his Condensed Night. In the past years I have been developing certain style of illustrations and animations kept completely in black and white with rich ink and pencil textures and grotesque visuals and distorted proportions which I think could be categorised as dark surrealism.

The inspirations can be traced to the artworks of Al Columbia such as Doghead or Junji Ito’s comic books, whereas my Polish roots can be seen from exaggerated postures and hybrid creatures sourced from the imageries of Franciszek Starowieyski or the enigmatic, dark atmospheres kept in Piotr Dumala’s animations. When it comes to Baraa, one of my main goals was to create the feeling of claustrophobia and convey the agoraphobia and confusion of the main character which made me reach to the works of M. C. Escher hoping they would help me emphasize the anxious impression of the fish eye lens.

ZF: Could you have imagined the film in color or the subject-matter clearly precludes this?

NC: To be honest, I never thought of using colours for this kind of film. In the first weeks of production, I was considering using sepia colours, in order to play around with the influence of old photographs and daguerreotypes, but in the end as my production time was really limited, I decided to focus fully on use of purely black and white and not distract myself from concentrating on designing the shots and the compositions.

ZF: do you think that grief can be cured, according to the film's story?

NC:  I am not sure if “to cure” is a good way of putting it. I feel like grief never leaves us, and permanently changes the way we interpret the world. It changes the values and view on the things that used to be seen as trivial before. My film talks more about the mental loop you get stuck in, when the perception of the reality is distorted and when facing the outside only causes anxiety and fear, when isolation feels safe and yet impossible to escape and incarcerating. I wanted this film to honour the ones who had gone through suffering and loss, those whose anonymous journals I found online. The stories about how after experiencing miscarriage or stillbirth, the parents didn’t leave their house for a year in order not to confront the reality in fear of moving on, as that would confirm the realness of the tragedy, and leave the illusion.

Baraa will surely never leave your mind easily after watching. It is one of those experiences that you want to revisit and possibly help, if you can. Natasza Cetner has positioned her frames with so much empathy for her characters that you may actually want to hug and comfort them. At the same time, you can watch all anguish unfolding in the freestyle movement of various creatures, wishing for them to go away -or, at least, stop monopolizing the screen and leave room for those sad eyelids to appear.

Natasza Cetner is a London based Animator and Illustrator.  She has Bachelor of Arts in Animation from University of Westminster and currently studying MA Animation at Royal College of Art, UK.