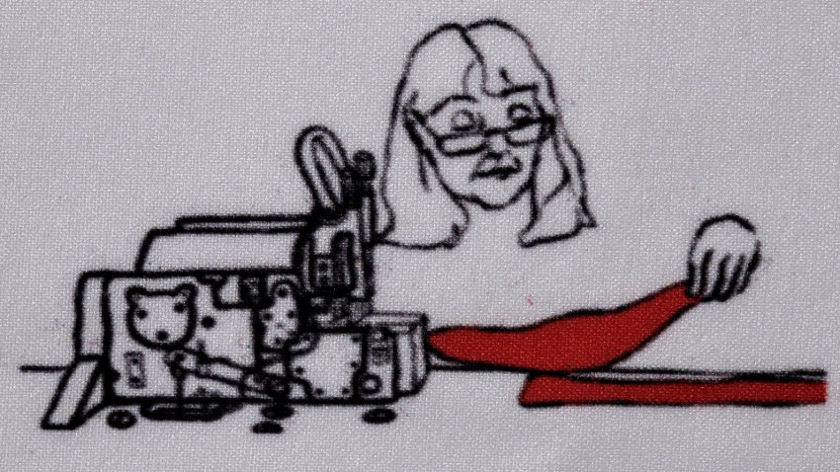 Animated fabric brings the story of a lingerie factory in Manchester to life in Samantha Moore's Bloomers animation short. Silk, cotton and lace go under the camera, as the workers recount the history of Headen & Quarmby, the UK garment manufacturing industry, and British family traditions of making.

This really pertinent topic and film originated at a weekend workshop in Vienna in May 2017, where Samantha Moore also pitched for the project and met collaborating composers -the eventual composer for Bloomers was Malin Bång. Production started when funding came in place in December 2017. "My best move was persuading Abigail Addison (producer at Animate Projects) to come on board early in the process" Samantha Moore tells Zippy Frames, "because it really helped things go more smoothly".  Bloomers premiered in early Spring 2019 at the Stuttgart Eclat festival with full orchestra, performed by Klangforum Wien.

Samantha Moore had originally planned her film to be about a women’s bag making collective in Cambodia; she quickly changed her mind (after a friend's feedback), for the proposed subject matter and the English language of discourse could invite concerns about colonialism etc. She subsequently realized that being closer to home could enrich her research: "By choosing a topic and a place somewhere in my own country I could visit them lots of times to develop a meaningful relationship with the factory, which is what happened" (Even though Moore had no links to Manchester, her film involvement was coincidentally accompanied  by a teaching job on the Masters programmes at Manchester School of Art).

As she herself states about her interview process "the workers at the factory were incredibly generous about giving me time. Every time I went in to draw them, chat to them, take photos, and eventually record audio interviews, they were all working. Everyone there, whether they owned the factory or were employed there, works hard because they are a small business in a competitive market".

Moore usually works by involving the people being interviewed by including drawing and colour ideas (see Loop, 2016 and An Eyeful of Sound, 2010). In this case, she was welcomed as a temporary member of the factory team ("When they took a tea break, I did too!"). And the way to involve those people in the films was the material - the 80 metres of crepe de chine they gave her to print the film on. "They also made the knickers for the final shot", Moore adds. "When we screened the final film at the 2019 Manchester Animation Festival it was an amazing celebration because they all came, and stood up for applause at the Q&A afterwards! It was an emotional moment". 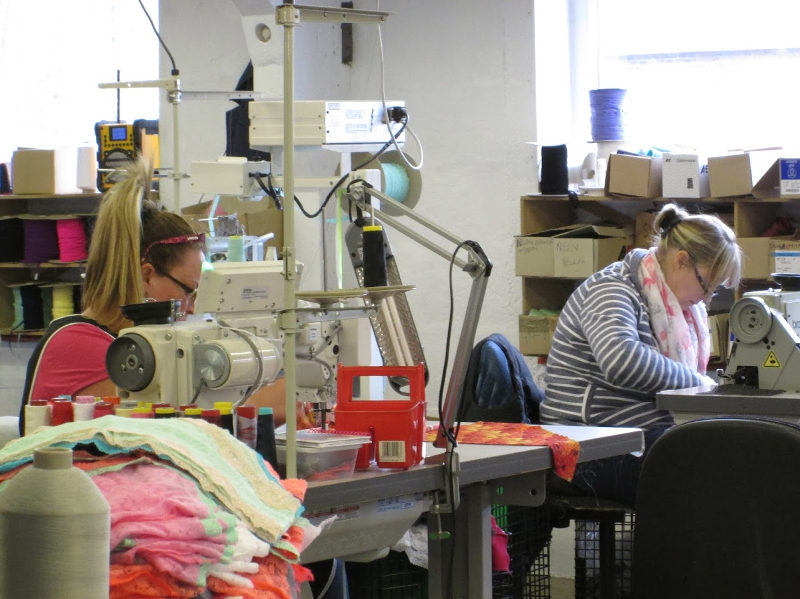 Samantha Moore first drew her scenes on computer and then printed them on a variety of fabric material. The whole thing was later shot in a process that actually duplicated the ordinary work, but it proved worthwhile "It was a totally new (made up) technique of first entirely digitally animating, then exporting the sequences as jpegs, then getting those printed onto a thermal paper, then hand printing the fabric (at Wolverhampton Art School), then shooting the fabric in a studio".

Apart from the crepe de chine fabric, Moore also used heavy silk, a crocheted stretchy lace fabric, a linen/cotton mix, and a heavy sugar paper (for the scenes that take place in the past)". Moore had to test different fabrics; what appeared perfect at first glance would look wrong for the scale used for the film (most frames were printed at 6.5 cm x 4 cm). "Some beautiful fabrics, once printed on and zoomed into for that scale, looked like badly pixllated imagery! I needed it to be clear that this is real fabric we are seeing".

Samantha Moore loved most of the procedure of making this film, but this doesn't mean it didn't have its worries. "I had made a test gif for the pitch" she states, "and it worked beautifully but I had no real sense of how long it would take, and how complex it would get for a film of this length. There ended up being around 13,000 images (there were 16 in the gif!). The fabric printing took days, and got very intense since all that polyester fabric needed to be pre-shrunk before I could print on it, so essentially I needed to print it all twice".

By realising that the size of the fabric lengths was distorting all the images in the numbered sequences, Moore had to cut them down into smaller strips, devising a sub-numbering system; she then ordered those into scenes, and finally shot in in order ("It was tough" she says). The Shrewsbury photo studio (which also made the 'Making of Bloomers' documentary) was used; it was booked for 2.5 days, and they ended up being there for 10 days. "I had to work 12 hours per day to fit it all in. They were really brilliant and made me lots of coffee to keep me going. In retrospect I would have individually numbered the frames" she adds.

Aesthetic decisions also weighed in. "When I visited the factory, it was clear that it was visually incredibly complex; so many colours! So much stuff everywhere! I would therefore need to simplify the visuals to make it readable by the audience" Moore elaborates. "I constrained the colour palette to a B&W line and a selection of lingerie-inspired colours (pale pink, hot pink, lilac blue etc.). I decided that the only parts that would be coloured would be the fabric, thread and buckets of lingerie. I also decided that the workers themselves would be represented through hands and faces, to put the focus on their tasks rather than themselves". 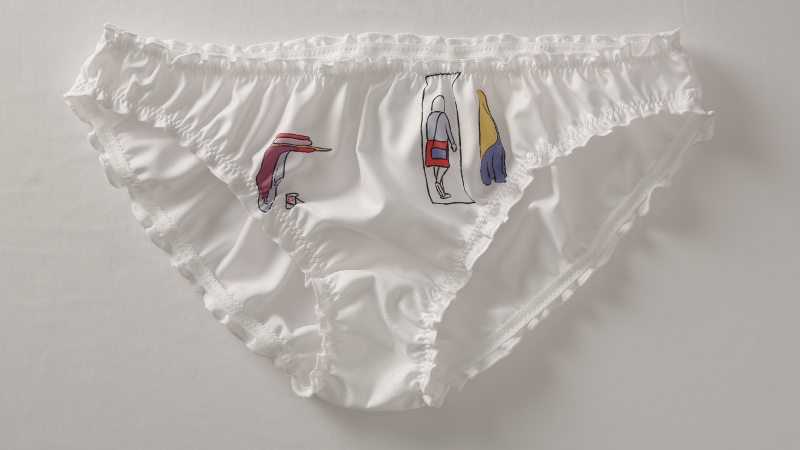 Women are both the masterminds and the driving force in manufacturing in Bloomers, whereas men represent mostly the mechanical / executive aspect of things. "This was probably due to social norms of their times" Samantha Moore comments, "and it's true that Mary was the creative and dynamic instigator of the factory, and Eric was the engineer. I love the bit in the film where the (male) fabric cutter and the (female) seamstress disagree about the qualities of silk - it’s such an invested conversation. I was very drawn to the garment manufacturing industry because it’s perceived as a ‘female’ skill globally, and characterised so often by poor wages and bad conditions in developing countries. I don’t think that those two things are unrelated. Ella & Me are an example of how to do it better, by paying living wages and by being embedded in their community".

As she states, she got very lucky to find Hazel, whose parents Mary and Eric started the factory ("she still works there"), and David her son, who now runs the whole thing. Hazel recently had twin grand daughters, so perhaps one day they might join the family firm too and continue the tradition.

Film Review (Vassilis Kroustallis):
Big revolutions sometimes start with small decisions. It even seems that UK women's rights activist Amelia Bloomer had no better chance to showcase her advocacy for women's healthier clothing style than by simply wearing the bloomers garment herself. Samantha Moore follows on her tradition by not just registering the thoughts of a traditional Manchester garment factory in her film, but by also printing their thoughts on the fabric they work with. Bloomers animation documentary functions itself as a home sewing machine, having both the necessarily small scale and the faces and hands that register behind the machine. If the devil is in the details, the essence of Bloomers is in the small but spirited decisions to be made (what kind of fabric? what's the color of laces here?) which still lead to the big company portrait. Moore's film will subsequently equate a well-functioned machine with a family home, yet the film will still not emphasize nostalgia, but will focus instead on the professionalism and the care and the diverse minds its task requires. The multifarious tactile feeling of Bloomers and Malin Bång's score (at times a spark ready to fire, at times a sewing machine in full force) make up for a journey that also includes its bad moments (watch the tracking, silent shot when the company had to relocate its production elsewhere). Bloomers is an all-inviting, observant animated portrait of clothing stories and practices to be unveiled and presented -and ultimately worn.

About Samantha Moore
Sam Moore is an animated documentary maker who is passionate about the ability of animation to convey insights into tricky documentary topics. Shehas made work about competitive sweet pea growing, phantom limb syndrome, twins and multiple births, audio-visual synaesthesia, micro-biology, archaeological finds, and now the manufacturing of knickers.Sam’s films have won awards all over the world and she has a Ph.D. (2015) about the way animation can be used to document perceptual brain states,such as phantom limb syndrome and face blindness. Her artistic methodology is based on establishing strong symbiotic working collaborations with the people who are represented in her films, through visual contributions and aural recording.Samantha is a senior lecturer in animation at Manchester School of Art. She guest lectures regularly both in the UK and abroad