Delia Hess has crafted an environmentally-focused film with an all-encompassing perspective.

On a small planet, caught up in their own little private universe, the inhabitants perform their poetically surreal actions, which repeat themselves in an endless loop. That they are all part of a complex little ecosystem that can only function if each of them plays his or her role, is something they are unaware of - Film Synopsis

ZF: The theme of the film is clear-cut, but the way you put the various characters and scenes in the film is original. Did you have all characters (the swimmers, the lady, the guy, the old man) from the start when you were scriptwriting/storyboarding?

DH: I developed the film from a bunch of sketches and ideas, a collection of situations, places, and little stories that were connected to the characters from the beginning. I had a lot of ideas, so I had to kill many darlings to get the final selection of characters and scenes that made it into the film.

ZF: I was wondering whether you were inspired by the circular shape itself to populate more characters, like the bikers. Also, the film takes place all outside, not in the urban environment. Can you comment on that?

DH: My first idea was to represent a water cycle as an example of a circular system that affects all of us. Later, the idea shifted more towards an ecosystem as it seemed to me more multifaceted or interesting. But the water kept its importance in the film as a connecting element between the characters and places. I wanted the characters to represent humans that are together with animals and plants a part of a bigger system such as the planet and the water connecting everything. I decided to let the film happen entirely outside and in nature to make it clear that the humans in this film are on the same level as animals and plants. Also, it helps to make the film more surreal. Of course, the shape of the circle inspired the design and the story a lot, such as the bikes, the fruits, the pools, the little island, and the planet itself… I integrated as many circles as possible into the film, visually and in narration.

ZF: The timeframe of the film has an eerie quality, between today and the not-so-much distant feature. Do you place your film anywhere specific in time?

DH: For me, it is not happening in the future or past. It’s more like a fairy tale that happens somewhere else and out of time, as it is repeating (maybe) endlessly.

ZF: The character design and the animation style look effortless, but I guess it would have been a lot of work. Did you do it hand-drawn or digitally (or both)? And were you troubled by anything in particular (character design, color palette, etc.), or was it just simply a sheer amount of work?

DH: Already in my very first scribbles I defined more or less the color palette that I used in the end. Also, I used watercolor from the beginning. The colors and technique seemed appropriate to the story or idea to me from the first moment. I wanted something very simple and maybe a little naive or even childish, as the film represents to me a very simplified idea of a complex world. But I put a lot of work into the characters and did a lot of tests to define the details of the final design.

ZF: How was the film produced? And what were the people that helped you?

DH: The film was hand-drawn entirely on paper. It was a lot of paper and watercolor and we had some troubles with the colors and digitising and compositing the drawings. I was lucky to have great people helping me such as Stefan Holaus, who advised me on the workflow and did the digitalisation, image editing, and compositing with a lot of patience and enthusiasm. My colleague Anja Sidler did a great job, animating the "melon girl“, Charlotte Waltert animated the birds and Jessica Studer spent months next to me, chatting and coloring the animation with me. Last but not least I had a lot of help from my producers Marcel Ramsay and Michèle Wannaz who worked a lot on the development and dossier with me. The music was made by Alexandre Babel, which was a lucky collaboration and gave an extra level to the film. And the sound design was made by Peter Bräker who found sounds to connect characters, places, and actions and let the film’s world become something complete and coherent.

ZF: You've done animated films before. Is a new film a new challenge or do you simply know the ways and proceed along?

DH: ‘Circuit’ was my first film after graduating from art school and it was a much bigger project than my graduation film. So I had to learn a lot about film production, such as creating a dossier and a budget and searching for funding, building a team and a schedule, and so on. It was sometimes overwhelming and many things did not work out as I wanted. But in the end, I was quite content with the result. I learned a lot for my next film, which is currently in production. But still, there are of course always many challenging things on every new project as a new film means a new story, a new technique, a new world to get to know, and probably some new people to work with.

ZF: The film gives the meaning that everything is connected, but still, not everyone knows it. How would you feel the characters of the film would react after the film has ended? Like a sequel of sorts

DH: I hope, that one day, someone will break out of the routine and search for something more to see in his / her life. But this probably means that everybody else has to find a new place in the system… let’s hope this works out fine for everyone.

Film Review (Vassilis Kroustallis):
‘Circuit’ is about keeping things and letting them go. Movement and stasis circulate throughout the film, which uses its multiple characters as an earth ensemble to go back and forth their ordinary chores (always associated with the land which surrounds them). Water and land here seem to integrate -until they don't, and the air element (here of crows looking to be fed) is a reminder of our being watched. The film justifies its hand-drawn quality by becoming more intimate as a result, while the sound design and the music give a more aloof impression: the characters' fates make up for a whole that overcomes its parts. Making all her characters deeply empathetic, and using symbols as points of interaction, Hess creates a continuity both welcome and smooth enough to traverse.

Delia studied animation at the Lucerne School of Art and Design (HSLU). Since her graduation in 2012, she has been working as an animator, illustrator, and filmmaker. 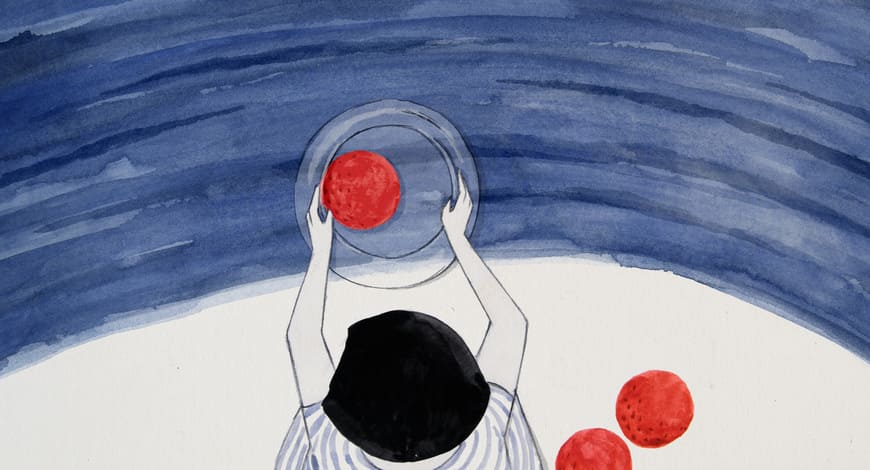