Croatian animation director Kata Gugić has recently completed a much interesting story and topic, the 2D animation short 'Cockpera'. This is described as a short opera inspired by Aesop's fable The Fighting Cocks and the Eagle.

She talked to Zippy Frames about her film, as part of our Shorts Corner section.

ZF: Most people wouldn't start their graduation film with Greek myths (a subject that has been done at length in Disney) and opera (a subject probably too grand for animation). You started by tackling both, Aesop and opera. Tell us why.

KG: I chose a fable because it's a simple story told in a few sentences that gave me all the freedom to take it wherever I wanted. So even if it's been told many times this makes it easy to give it your own spin. This story clicked with me right away and since I have a background of work in the music scene and theatre, my mind immediately went there. The idea of making it an opera seemed exciting and fitting since I wanted to make a comedy focused on the raw, overwhelming emotions of pride and grandiosity that the story deals with.

ZF: Your film has this theatrical staging from the start (and audience clapping at the end). Was that essential to the story? At the same time, the various shots constantly move the plot. Did you storyboard a lot?

KG: The theatrical staging came very naturally as I kept building on the idea of an opera. Other than a battle of two egos there is also an element of seduction in the story. Actually, the version that I initially read specifies that the cocks were fighting over the hens, so I wanted to show the whole film through that lens. And seduction is in itself very performative. There are truly fascinating mating rituals and dances, especially in birds, that have a very strong performative quality. This can likewise be seen in humans, in this context with an added comical aspect to it that I wanted to play with in the film. As far as storyboarding I had the first part of the film all thought out and drawn out pretty early but had a harder time doing that with the second, more dynamic part. So, for that, I only did very rough key images that I needed for the structure of the animatic. Everything else, layouts and animation were done on the fly, depending on what I thought worked well with what was already finished. Looking at the film as a whole now, I am a lot happier with the parts I approached this way.

ZF: Obviously, music is important in film and toys with many musical references. How did you handle this area with your composer? And did you have the music before the animation or during the animation stage?

KG: Music was composed by Vjeran Šalamon. I gave him a rough animatic, and we discussed in depth the tone of the film and the references I had in mind. Since music is such a crucial part of the film, I wanted him to have freedom with composing, as well as more flexibility with the structure of the piece than what he'd have if the animation was already done. Once the music was made, I adjusted the timing and rearranged some shots to work better. Singers were recorded when some of the animation was already there, to give them an idea of what the characters are like, and the rest was done afterward.

ZF: The character design is comically exaggerated and grotesque. On the other hand, your color palette is very limited and intense. Can you discuss these aesthetic choices? Also, any other thing that went in the animation process?

KG: In a way, the design follows the nature of the story and depicts the ugly, the beautiful, and the comical of human emotions and sexuality in a satirical setting. And because of this sexual undertone, I wanted the color palette to give an appearance of flesh and nudity as well as emphasize the grotesque human factor of these anthropomorphic animals. The design also influenced the way I approached animation. I did some tests where I tried a cleaner line, but I hated the process of cleanup and it took away from the final look of the movement so I kept it messy and never looked back. It speeds up the drawing so much and I suppose it also works as a little outlet for the energy that builds up during hours of sitting.

ZF: What were your production plan and deadlines? Time is always the most significant enemy here. Was it in your case like that?

KG: I think the time was an ally because I’d probably still be stuck storyboarding if I had no deadlines. To be fair, I did take all the time that I could with this, but during the process, I also learned how to improve my approach and optimize my mental energy in a more demanding personal project. Still learning though.

ZF: Male toxicity and its shortcomings appear very prominently in the film. Was that something that you had in mind all along?

KG: Things really just fell into place that way. The setting was an erotic opera, so it seemed logical to include a classic love triangle at the heart of the story. The leading lady in opera is often presented as pure and self-sacrificing while at the same time oppressed, reduced to an object or a prize, and in the end silenced, often by death. So, no, I did not go into the process with the intention of making a film about toxic masculinity, the message is a universal one, about human shortcomings regardless of gender, but these character stereotypes and outdated dynamics were just too sweet to not satirize.

ZF: Was that a musical animation experiment and experience that you'd like to repeat, or are you perhaps thinking of something else now?

KG: I am currently in the development phase of my new short film 'Nightbloom' which will be very different from 'Cockpera'. I still plan to give music and sound a significant role, but my focus this time will be on the animation and the form first, and the sound will follow. But I would absolutely love to make another film that uses sound as a theme or a starting point for experiments in animation. I have a few ideas that I think could be interesting projects to make, one I’ve been thinking about for a few years now. Maybe the film after this one. 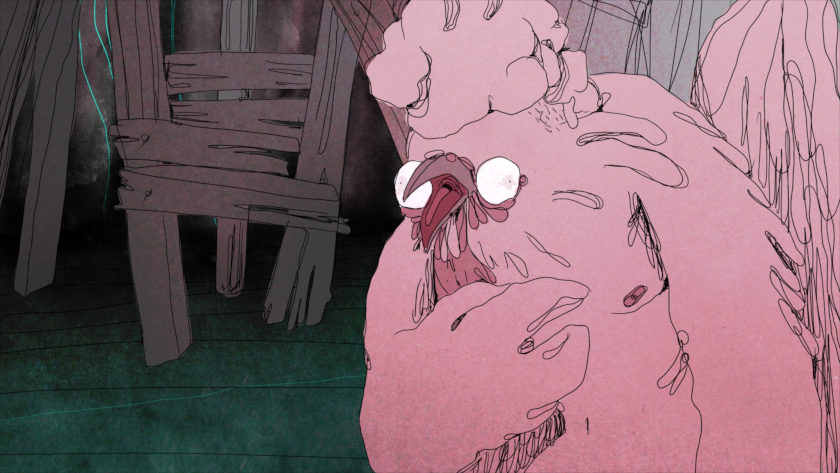 Film Review (Vassilis Kroustallis):
It pays to be loud. Kata Gugić makes an animated moral fable full of pertinent pink colors and armed with a sense of the absurd. This is a film that needs its energy to come up out of two sources: voices and setting. It succeeds admirably on both, with voices becoming a sweet parody of opera tunes and energetic, differentiated shots moving the plot forward. 'Cockpera' plays beautifully with size and dimensions, by elaborating on its characters' almost jarring advancement into medium shots and close-ups; on the other hand, the theatrical setting provides an all-witnessing audience, ready to clap on every sad mishap. A tale of male sexual hunting going astray, 'Cockpera' softens the blow by having its characters be more of disheveled and fluffy characters; cannot connect to them, so you are ready for fun. Opera buffs might object, but otherwise 'Cockpera' is a salty animated tale of longing, pride, and comical redemption.

About Kata Gugić:
Kata Gugić (1990) graduated in Fashion Design from the Faculty of Textile Technology, and Animation and New Media at the Academy of Fine Arts in Zagreb. She works in the fields of animation, set design, and costume design.