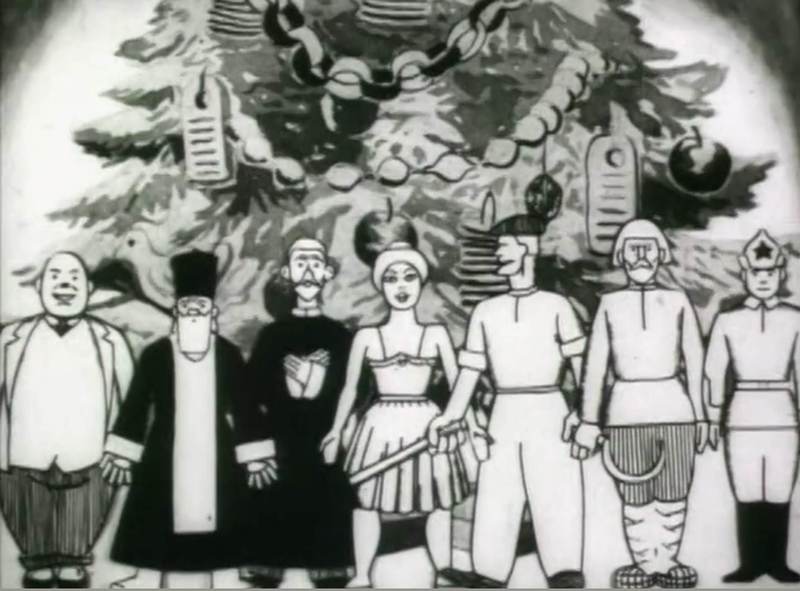 One of the most important and individualistic Soviet directors to emerge from the communist era, Dziga Vertov was known for his cinematic approach to blend a passion for reality with a very radical understanding of the cinematic means. His constructivist documentary Man with a Movie camera (1929) is the 8th best film ever made, according to the 2012 Sight & Sound poll.

In this earlier cartoon, Soviet Toys (1924), Vertov toys with the idea of a Soviet Christmas, free from all capitalist oppression. The film depicts the avaricious bourgeois and a transitional period in the Soviet state; under the New Economic Policy, a limited form of enterpreneurship was allowed.

Here the side effects of this liberalist policy need to be overcome by a strong cooperative proletarian effort.

Vertov translates heavily invested Socialist ideas, such as the union of proletarian and peasants, into an animate sequence of morphing the two characters into one body, and uses the trade of classical cartoon gags (devouring a person) to present his Marxist ideology. Stylistically, Soviet Toys has a lot of affinities with the simple drawings that Winsor McCay used in his own cartoons.

These bring out the role of the cinematographer himself (the Goskino  State Committee of Cinematography) as an active part -and not just an entertainment instrument- in the creation of a new, Socialist reality (also with its own phone number).