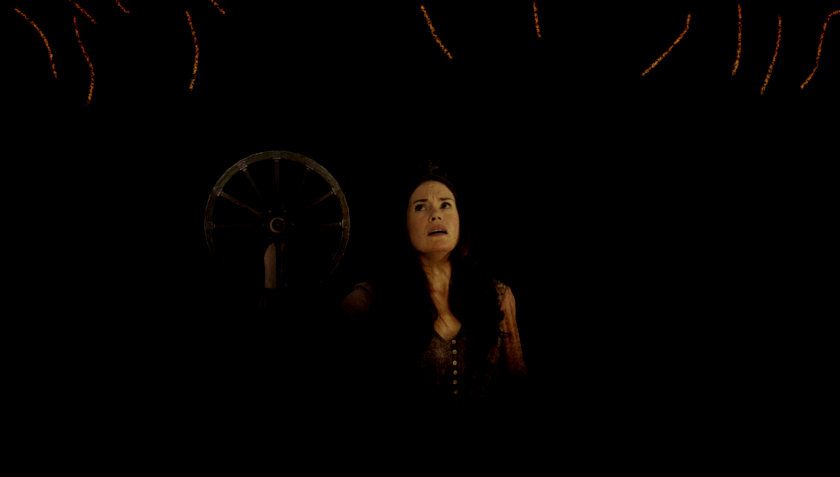 UK animation director Shaun Clark revisits an Royston insignium, and signs a story of trepidation and acknowledgement in the short animation In the Beginning. He talks to Zippy Frames.

Shaun Clark (The Key, Lady and the Tooth, Angry Dogs) has his own way of bringing back the dead. His films show the middle point between life and the other side of things -without being necessarily genre horror offerings.

His new commissioned effort, 'In the Beginning', tells the story of Royston Tapestry, an embroidery stitched over 25 years, to comment on the history of the Hertfordshire town -and also the homeplace of the Royston cave, discovered in 1742.

Buried in darkness, a woman witnesses centuries passing by as she cries out to the world in search of her identity and place in the world. - Film Synopsis

The 25-metre tapestry contains 15 embroidered scenes covering 64 million years of Royston’s history. 'There was plenty of material to investigate and explore through dance and animation', Shaun Clark states. The film is part of a programme of events collectively known as ‘A-Muse: Arts in museums, organised by Beee Creative and made with a number of museums in Hertfordshire (funded by the Arts Council Of England).

Watch In the Beginning trailer:

Clark started working on the project in March 2020, with Beee Creative Director Carrie Washington, and conducting online research due to the lockdown. 'I proposed to create a film exploring the history, layers and rhythm of life in the tapestry. In the same way the tapestry was created using layers of thread and fabric I intended to interweave a new layer of movement through dance and animation into the tapestry’s evolution'.

Τhe creative collaboration with scriptwriter Chris Lincé started when Clark watched the writer's own theater show 'Carbury Gifts' ('a strong narrative arc with only one character'). Clark and scriptwriter Lincé spent a great deal of time researching the historical events, in order to add an extra level of narrative to the tapestry.  Another pattern of one character narrating the whole story emerged: the last scene of the tapestry stands a woman holding a wheel, identified as Saint Catherine. 'The story of Catherine’s search for her identity is the drive of the story and until she has reached her goal she is not in a position of strength', Clark explains. 'She is situated under the ground in a cave and whilst she controls the passing of time she is reliant upon the knowledge of the people above her to solve her problem'.

The poetic tone of the narration itself won't go unnoticed. 'In the first draft of the film, Chris wrote a first draft outlining the story, which contained some verses within it. The verses worked very well so we decided to keep this approach. We then finalised the narrative structure and actions before Chris re-wrote the entire story in verse'.

The film is divided into three sequences of Catherine asking for help and addressing the people above the ground. 'Visually I wanted to submerge the audience within the tapestry and the layers of history so I storyboarded the film with three long sequences accompanied by music that would lead the audience through the tapestry', Clark elaborates. 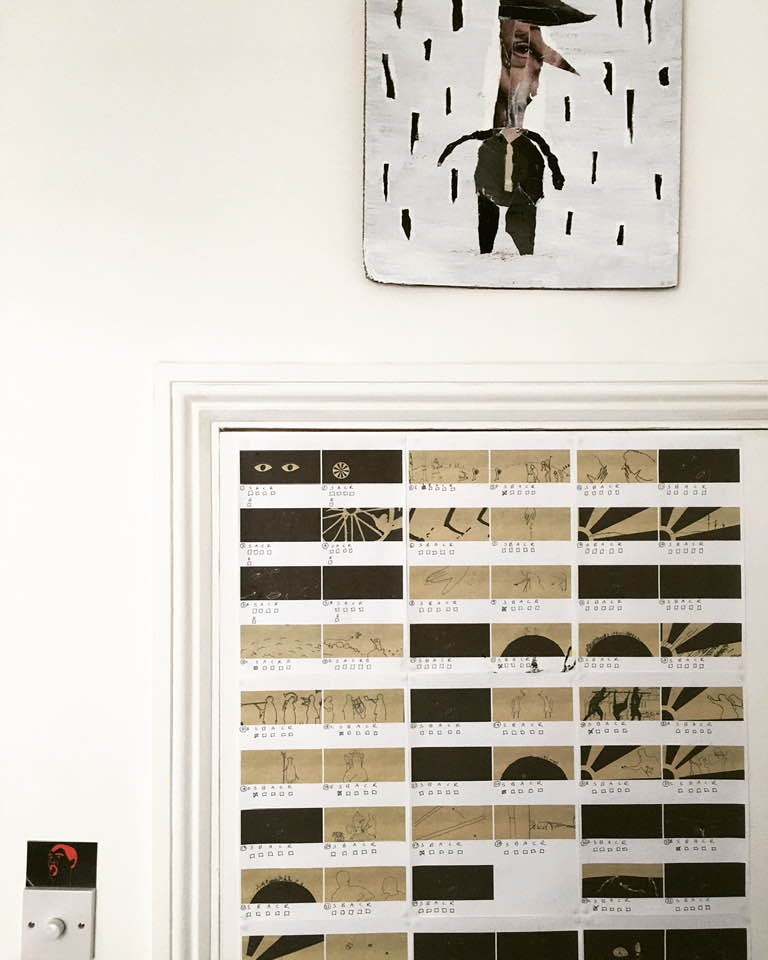 'These moments are intended for the audience to really observe and feel the passing of time as the camera tracks across multiple characters and events. Choosing to track the camera throughout the film was a choice I made to represent how a viewer would see the tapestry in the exhibition'

Unlike the characters above the ground, Catherine is not a silhouette, but a live-action character. I hoped, by being able to see Catherine’s facial acting, it would communicate her struggle and form a stronger connection between her and the audience. I also wanted Catherine’s movement to be smoother than the characters above the ground, as she cannot see them and relies upon her imagination to form what they look like and how they move' Carrie Thompson (also the leading actress in 'Carbury Gifts') played Catherine and also delivered the voice over track.

Shaun Clark used a group of dancers on the film's sequences on the film's sequences (initial instructions given via Zoom workshops). Choreographer Carrie Washington developed a series of movements with the participants based on the script, which they then acted out and filmed. Clark retimed the performances afterwards; 'I made the participants into silhouettes with a rugged outline and composited them into the film'. 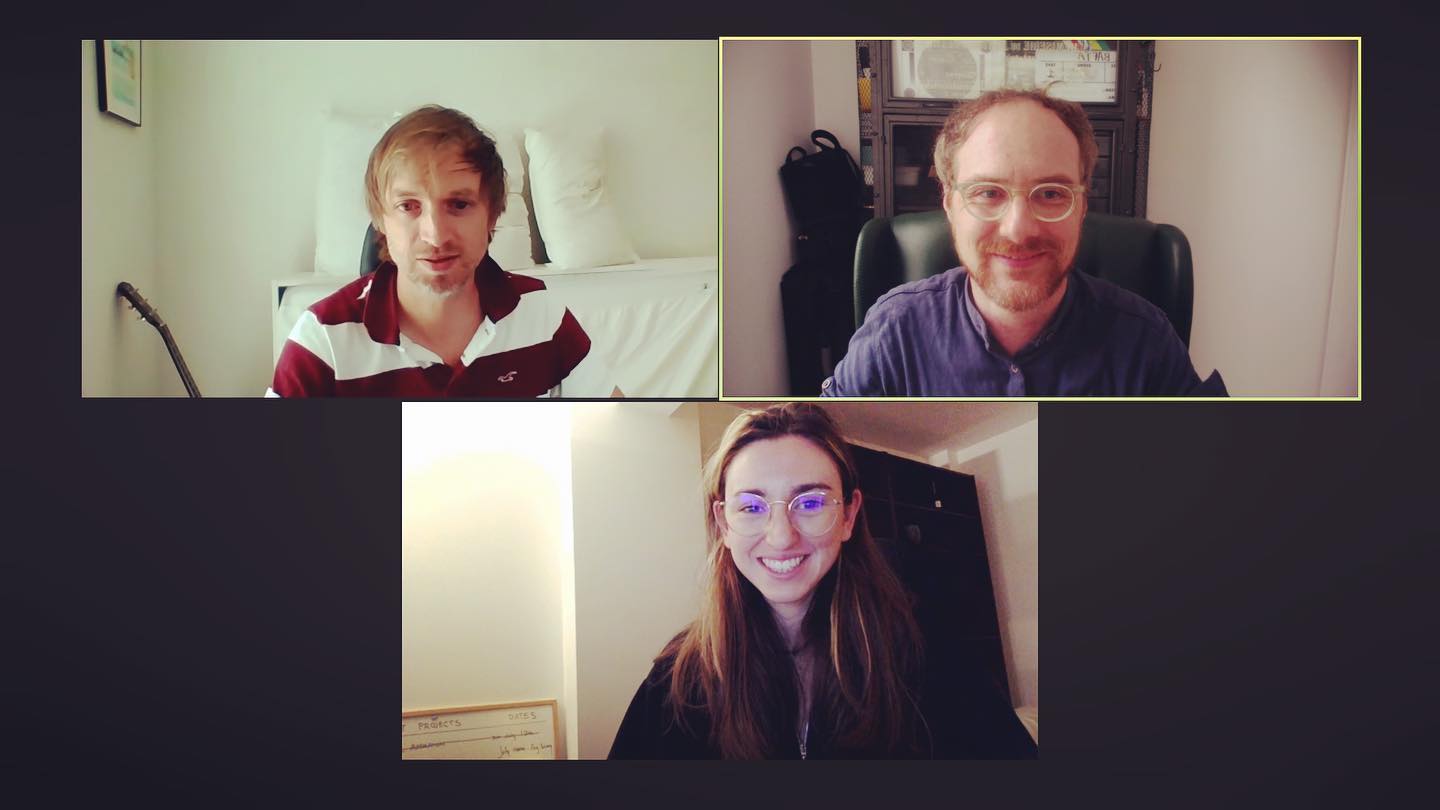 Madison Willing composed the sweeping music for the film. 'I approached Madison after hearing a number of tracks on her website which I felt had the right tone for the film. I felt for this film the physical distance was very important, as Catherine is located deep under the ground, whilst the other characters are positioned on the surface of the earth. So I wanted the score to create this sense of scale and separation between the characters'.

Madison composed the tracks over a two-week period during the fine cut of the film ('I gave her timecode references for where each track should be positioned and we communicated remotely'). Production meetings with Madison Willing and sound designer David Pringle were also arranged.

The word 'remotely' features as many times in Shaun Clark's interview, as St. Catherine herself is trying to get heard above the ground. ' We had to do all the choreography and filming remotely which was challenging'. Cinematographer Nick Cooke was brought in for an online workshop to teach the dancers how to film themselves on their mobile phones. 'I then used a visual AI software to extract the backgrounds as we were not able to use a green screen as I had initially intended'.

Yet Clark does feel that challenges add to the film's own added value -and to his own experience as a filmmaker. 'I  wanted the film to appeal to a wide audience and to the visitors who may see the film within a museum context'. He admits it was a challenge to depict things in such a short narrative, still he feels they managed to find interesting solutions to explore those issues, making a film both engaging and as historically accurate as possible.

Shaun Clark's travelogue through time and the wheel of our (very short) lives unveils like a library catalogue of events, now ready for the first time to view and review before our own eyes. Leaning in the middle ground between darkness and full disclosure, In the Beginning is both informative and dramatic; live-action and the main character, helped by her words uttered in a rhythmic pattern (time is cyclical in this universe) contribute to the narrated drama; whereas, at the same time, another drama is played above the ground -silent but eloquent. Movements and choreography bring their own intensity to the unknown, whereas the silhouettes and the spare use of colors make every statement sound deeper. With a music used to underline even more emotional instances than the explicit uttering of the words, and an acting that brings insecurity and charm to the character, 'In the Beginning' looks like a fitting piece to recreate its own history. Respectful to the tradition, yet imaginative and reading behind the lines, it is an accomplished visual and narrative piece -and its own calculated tapestry of history as well.

About Shaun Clark:
Born in Beverley, United Kingdom. Independent filmmaker Shaun Clark has worked as a director and animator since 2005. His work has been BAFTA nominated and won prizes at Clermont Ferrand Film Festival, London short film festival, Imagine Film Festival and the British Animation Awards. Shaun has held retrospective screenings of his films both in Greece and South Korea and has created films for the BBC, Discovery Times USA and Arts Council England. He currently resides in London where he works as a director at Flickermill.

The Feathers That Smell of the Sea by Zoel Kastelic