My Favourite Hill by Christopher Childs 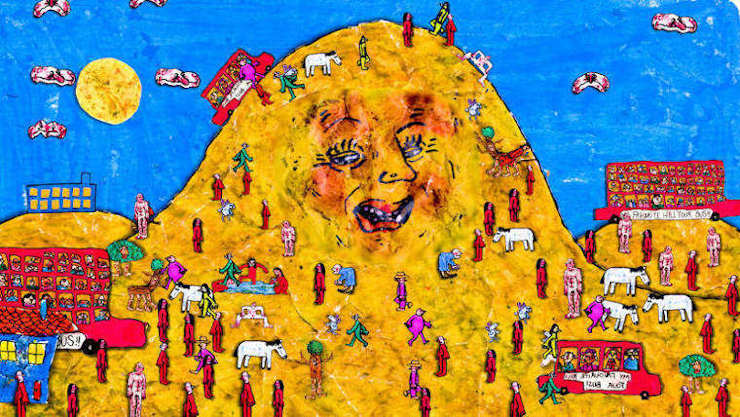 Bristol-based animation artist Christopher Childs makes a film on a hill invasion. My Favourite Hill, his graduation film from UWE Bristol School of Animation, tells the story of a hill and its stormy interaction with its visitors.

ZF:The film looks like you really couldn’t bear anymore travelers/tourists essentially invading and occupying natures wonders. Did you have something specific in mind in real life, out of your own experience – or you made the whole thing up?

The film was originally based on a real hill in Dartmoor National Park, which I obsessively walked up during a strange summer. By night I packed boxes in a cheesecake factory, a mind-explodingly boring experience, and climbed onto the moors during the day. In the film, I wanted the hill to be a welcoming presence, encouraging the factory workers to roll around in mud and go wild. When the big tour-bus full of people shows up, I wanted them to also be welcomed. In real life, the hill isn’t a popular destination for walkers; it’s quite short in height, more like a lump of earth, and everyone goes past it. I wanted to create some alternative reality where it becomes very in-demand. I also just wanted to make big red buses out of card, which is apparently something the horrible prime minister of the UK likes to do as well (there’s a YouTube clip of him talking about it). I find this disturbing.

ZF: Did you have fun writing and narrating the deranged hill segment?

CC: I found this voice that I liked to do, quite deep and well-spoken, and the character came from that. I was watching lots of interviews with the director Terence Davies, who sounds quite similar. Most of the dialogue is just improvising, working myself up into this weird state where stupid words pop into my head. I’m quite embarrassed about my voice acting, so I usually have to find a quiet room/cupboard to record in.

ZF: Did you always have in mind this ‘ugly-looking’ aesthetic in character design? And why?

CC: I wanted a gross texture for the whole film, which is why I settled on using oil pastels, which have a greasy quality to them. I’m not sure I’d describe the characters as ‘ugly’. The factory workers were inspired by Howard Finster’s artwork (he did the cover for the Talking Heads album, ‘Little Creatures’). I was drawn towards these figures in his paintings who seem to wear colourful jump-suits. I also think there are ways of drawing faces that just make me happy, like reddish noses or big ears. Whenever I can make a character hairy or wrinkled I do so without hesitation.

ZF: You used cut-out animation. Tell us a little bit more about it, and why you chose this technique?

CC: I made all the puppets out of paper, scanned them, and digitally composited. Originally, I wanted to only shoot in-camera, and was quite snooty about using computers. I eventually found out that compositing gives you a lot more control over the shot, moving things around, scaling them up etc. The sacrifice was the smoothness of the animation, as I was using replacements instead of a jointed puppet. I ended up liking the choppiness of it though. I also wanted to make sure that each element was hand-made, although I did basically allow my process to be digitised. I’d be surprised if my stop-motion friends ever talk to me again.

ZF: Can you give us a timeline of your production process? Since this is a student film, I assume you had both some limitations (in terms of time and budget) but also opportunities.

CC: I’d finished about a minute of footage when it became clear our animation studios would have to close because of safety concerns. I was incredibly lucky that I was making a film that didn’t require much technology or working space. Lots of my friends weren’t as lucky, and had to postpone their films, which I would’ve found completely devastating. I moved back home and continued production there. I could see the real-life hill from my garden, watching over my every move. Not being with my course mates in the studio was very disappointing, although the fact I wasn’t having to justify or explain my creative decisions meant that they became slightly stranger. Making the film was also a useful distraction from the constant upsetting news, so I tried to completely immerse myself in the work.

ZF: If you were to make a film about tourists invading a sea resort, would your film be any different?

CC: I’m not sure! The problems that tourism can bring are probably more applicable to seaside towns than they are to moorland areas. Mark Jenkin’s latest feature film ‘Bait’ (live-action) is probably the best exploration of that subject.

ZF: People who helped you during this process?

CC: I should mention that the film's soundtrack is from the work of Ergo Phizmiz, an artist who generously allows their music to be used under Creative Commons licencing. I was so excited to be able to include the tracks, as the film probably wouldn't function without them.

Film Review (Vassilis Kroustallis):
Two levels of interest cut across the story of My Favourite Hill by Christopher Childs; the busy-bee crowd ready to take their work clothes off and enjoy a collective holiday experience; and the tongue-in-cheek narration of the hill itself, which welcomes the crowd as if they were Instagram likes to be collected. Stillness gives its place to infuriated movement, where muscles, joints and colorful garments vie for attention. There is anxiety (time seem to pass by so quickly in the hill) and the need to accommodate everything in a single visit, on a single piece of land. My Favourite Hill is the instance of an effort: it effectively satirizes the both spiritual and physical effort to become a land conqueror, even for a brief while -while the bus sound will inevitably signal the way to your return. At the same, the characters are relatable: they just want to leave their uniformity behind them, and parade in hats, bathing suits and shorts of all sorts of colors. It is a mismatch with a hill delicately conceived and amusingly presented.

About Christopher Childs:
Christopher Childs is an animation filmmaker and artist based in Bristol, UK. He often uses physical materials, such as card and paint, and experiments with sound design. Christopher is also the curator of Off-Beat Animation, a small film society in Bristol, which celebrates independent and alternative animation. He is currently a submission previewer for the BFI Future Film Festival.