A woman alone in a small flat is carrying out her daily housework when she starts hearing sounds from the other side of the wall. The neighbour’s undecipherable doings are slowly invading her enclosed space, increasingly merging with her mundane chores. She picks up the typewriter and starts writing, equally triggered and distracted by the strange noises. In her struggle to map out the features and actions of the elusive character next door, her own reality gradually starts to disintegrate.

This is the synopsis of Carolina Sandvik's puppet film Paracusia. The condition of paracusia is a deficiency in the sense of hearing, usually in the form of auditory hallucinations and related to psychotic disorders.

The film had its world premiere at  PÖFF Shorts 2019, and has already been screened (Swedish premiere) to Gothenburg Film Festival 2020, among other festivals. Zippy Frames talked to Carolina Sandvik

ZF: Why make a film about auditory hallucinations? Is it an article you read, a film you watched or an idea you already had that actually connected with the paracusia story? Did you have to do research?

CS: I knew the film was going to be about sound, which made me think about sound effects and the practice of foley sound recording. Sounds for film are made up from something totally different that what they represent on the soundtrack. That’s why I found the paracusia phenomenon suitable for the theme - hallucinations, illusions and make-believe are what filmmaking is all about. The term paracusia is not that well known - you would probably have to look it up, and that was intentional as I wanted this vagueness. Paracusia - or auditory hallucination is a symptom connected to certain mental disorders. The main character might be suffering from a psychosis - but the disorder might as well be operating on a collective, social level. We never leave this character, we see everything from her perspective, but we can’t trust what she sees and hears. If this house is a body or mind, there is no basement or attic. Everything is happening on the same level of sanity or insanity.

ZF: How do you imagine the backstory of your character? Is she a writer working from home? Does she have any personal or social life?

CS: I am not that interested in character development in my work. Any empathy that is evoked happens through the narrative and the framing. I try to achieve credibility by adding very mundane relatable details - the tiresome scrubbing of a pot etc. However. I imagine this character is running away from something, hiding, locking herself up in this flat. When we first see her we can presume she has just moved into a new house, as there’s a lot of moving boxes in the opening sequence. The domestic space in this film is a place of safety that becomes a confinement. The typewriter turns up as an instrument for her creativity, or madness. Curiosity, or fear, or arousal initiates her working process. Writing becomes her tool of coping, taking control, documenting or fictionalizing what’s going on around her. I imagine her as a potential victim of murder, a final girl in a horror film. That is also what she imagines - she is expecting or even creating violence and horror. We never see the surroundings and there is no reference to time. She does have an smart phone, at least initially, but the rest of the props are old fashioned. After she has lost her phone she is completely sucked up in a nostalgic past with her typewriter, analogue camera and broken CRT-TV.

ZF: Puppet design has a DIY feel in it. Can you tell us more about the puppet design and construction? Are there certain elements that you wanted to make them prominent?

CS: I used an old barbie doll that I cut to pieces, and made a new head of Super Sculpey modeling clay, hands of wire and latex, breasts of foam rubber etc. Her hair comes from a Norwegian souvenir troll. I wanted her to look like a doll but as I kept shooting I noticed that I started seeing her as a real person. I would spend much time finding the right light and angles to make her look more alive.

ZF: How do you feel about voyeurism as a cinematic tool? Is it something that came out naturally in your story? Your character is, of course, entranced/disturbed by sounds, but all this turns to her looking through peepholes.

CS: Cinema as a medium is voyeuristic, and the horror genre in particular. In my films I want to embrace that, rather than try to go against it. The viewer wants the enthrallment of peeping into something private, at a safe distance. As viewers we are capable of maintaining the belief that we are witnessing something that is not meant to be seen and at the same time knowing we can switch off at any time. We can move in and out of fiction. Cinema is pornographic in the wider sense of the word. In Paracusia the main character owns the subjective gaze and becomes the voyeur herself. The peephole is the very concrete image of that voyeurism. The lens of the camera is another peephole. 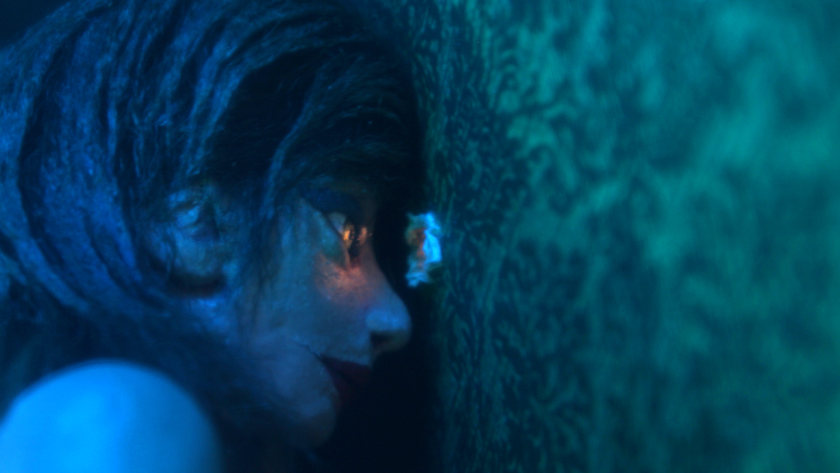 For the woman in Paracusia the first hole is accidental. She pulls out a nail and discovers the room next door. Shortly, she starts making her own holes, and discovers more and more of the mysterious neighbour. But only one body part at the time, one for each hole. The antagonist gets cut to pieces, which makes him even more terrifying - an escaping villain, or an unattainable object of desire. Towards the end the woman doesn’t bother to get dressed anymore, she sits alone in her lace lingerie, visible for another possible voyeuristic gaze that might come from the holes in the wall - or from the camera that is following her around.

ZF: There are many cinematic references that come to mind by watching your film. What's your most important one, the one that probably helped you here? Animation is not used as a cinematic genre (noir, psychological thriller) that much, but your film has all its ingredients

CS: To name a few: There is definitely some Roman Polanski in there - the solitude, paranoia and enclosed setting of Repulsion and The Tenant. Michelangelo Antonioni’s Blow-up and Francis Ford Coppola’s The Conversation were influential in terms of the voyeurism/eavesdropping theme. There’s a short Cronenberg moment in there too, paying tribute to Videodrome; The old TV set isn’t functional in it’s conventional way as a source of external information but becomes a projection surface of the woman’s fear. And every horror film needs to get rid of the phone somehow, and I was delighted to use a direct reference to Michael Haneke’s Funny Games for that sequence.

ZF: Would your film have been different if you chose also to include music cues in addition to sound design?

CS: Yes, I decided very early on that the sound would be only diegetic. Maybe this is what makes Paracusia a bit less cinematic, as it would have been much more of a genre piece if music would have been added to the soundtrack. I wanted it to be clear that whatever we hear is what the protagonist hears. And those sounds become more prominent when they are surrounded by silence, and when they get twisted. There are a few sequences where the sound becomes very distorted and unreal, as if we are inside the character’s head, gradually slipping towards insanity. The undefined muffled noises of the neighbour stand in contrast with the sharp hyper realistic sounds of the woman’s everyday doings. And of course music is a way of leading the viewer in a certain direction and I wanted a much more uneasy mood in this film.

Film Review (Vassilis Kroustallis):
Paracusia was made before the COVID-19 lockdown, and yet it shows clearly how a person can let go of her desires in exchange for a simple (hallucinatory?) sign of human presence. A long chain of everyday chores (mostly washing the dishes) accompanies her theater of fruits all over the place, like signposts of the taste she's missing. Take, for instance, one of the revealing tracking shots in the film: a series of fruits lead like tracking points to her own feet, moving nervously as she tries to type. This is the setting solidly established while at the same time the 'otherworldly' sounds start appearing. Sandvik creates a film in which hearing guides vision and hampers movement; she makes her puppet look like an abandoned toy ready to try everything (but only inside her own space), before she finally fades away and rests. Sexuality here is also a secondary tool to get beyond those noises and holes on the wall, but in the end it also leads to further isolation. Coupled with a hazy lighting that further blurs the character's surroundings, and an articulated shot sequence, Paracusia is a first-rate cinematic example of a character obsession, and a woman's own self-investigation. It is designed with attention to the surrounding details, and its atmosphere is hypnotic without being fake or moving into the realm of the fantasy. We watch a woman slowly unfolding her own fragility, and trying to make the best of it -and winning or losing sounds irrelevant here.

Carolina Sandvik is an artist and filmmaker born 1988 in Avesta, Sweden. She is currently based in Malmö, and received an MFA from Malmö Art Academy 2019. The animated short Dreams from the Ocean was nominated for Best Swedish Short at Gothenburg Film Festival 2018 and part of the official selection at Sitges Fantastic Film Festival 2018. Paracusia had its world premiere at PÖFF Shorts/Black Nights Film Festival in Tallinn 2019 and Swedish premiere at Gothenburg Film Festival 2020. For her films, Sandvik does everything from scriptwriting to modelling, animating and editing. Her work is influenced by the cinematic language of genre film such as the psychological thriller, horror and giallo. Her puppets are usually isolated characters in confined spaces, and violence is present as a threat or as a visceral reality. In Sandvik’s animated scenarios genre conventions merge with personal nightmares, daydreams and everyday observations.