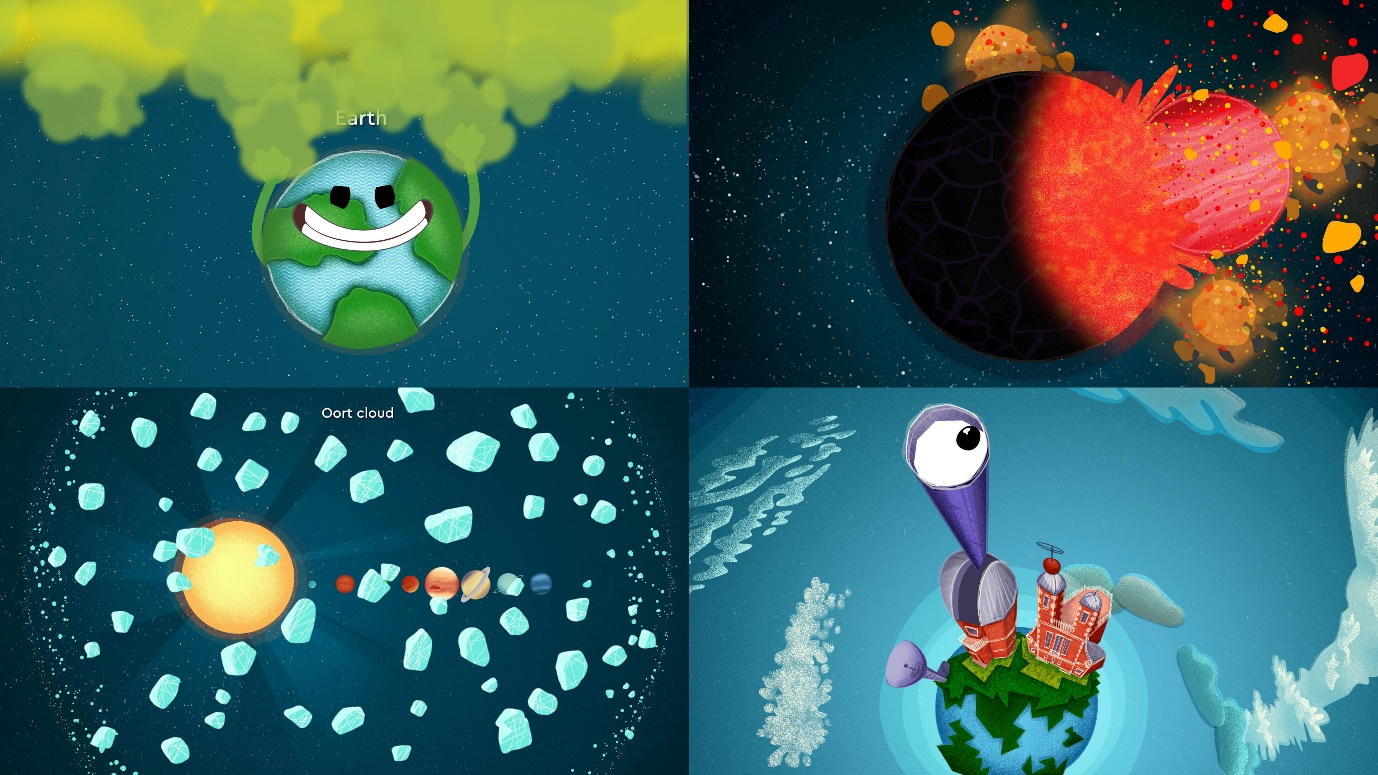 To mark British Science Week, the London-based animation company Slurpy Studios teamed up with Royal Observatory Greenwich (ROG) to produce three short films to inspire students to think about astronomy and space; and answer questions about our solar system.

Working with the ROG Learning team, it was Slurpy Studios’ task to take their scripts and bring them to life; explaining difficult concepts in a fun and simple way. Aimed at primary and secondary level students, the videos answer the questions: how the Solar System was formed, where space begins, and how collisions and explosions in the universe have shaped Earth, the moon and the other planets.

Each year at the Royal Observatory Greenwich, the education team develop new animated videos to add to our suite of resources created for teachers and students. We aim to produce curriculum-linked astronomy videos that clarify common questions which also lead to intrigue in the subject. The blend of the visual style, colour palette and music have resulted in three animated films which we’re sure will be enjoyed not only by our schools’ audience but by the wider public too - Dhara Patel, the Astronomy Education Officer at ROG

How the Solar System was formed

Begins by looking at how our Sun formed 4.5 billion years ago and then how the planets and other objects in our Solar system formed too. The film shows which planets are thought to have formed first, how some planets ‘migrated’ and how the Moon may have formed.<

The audience is taken on a journey through the different layers of the Earth’s atmosphere all the way up to space; on the way exploring where different astronomical phenomena occur (meteor showers, aurorae etc.) and look at what lies just above the boundary of space.

Collisions and Explosions in the Universe

Looking at a range of different collisions and explosions; from some of the smallest to the biggest including supernovae, asteroid / comet collisions, interacting galaxies and colliding neutron stars.

This series of films for the Royal Observatory Greenwich have been a lot of fun for all of us at Slurpy, as opportunities to explode stars, destroy planets and kill off the dinosaurs don't come along as often as one might hope. It has been a pleasure working with the ROG Learning team; they gave us a great deal of creative freedom and confidence to add our visual stamp and sense of humour to bring their scripts to life. We are very pleased with the final films - Katie Steed, Slurpy Studios.

Although launched to coincide with British Science Week, which takes place between 9-18th March 2018, the films form part of a wider collection of learning resources that help teachers develop an interactive learning approach with their students. The videos are accompanied  by downloadable curriculum-linked resources that provide more details about the topics covered.

Almost There by Nelly Michenaud