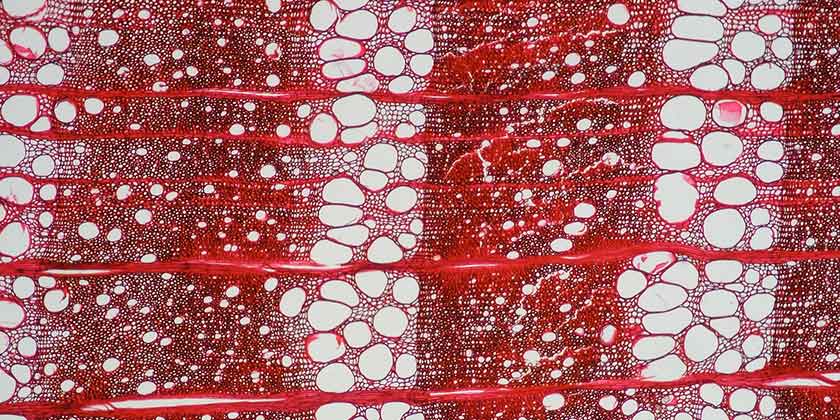 The film takes its name Xylem from a type of tissue in vascular plants, which transports water and nutrients from the roots up the stem to the leaves.

Michael Hughes is predominantly a stop motion animator, having worked on Isle of Dogs, Fantastic Mr Fox and Frankenweenie. As stop motion is an expensive and labour intensive process, when he makes his own independent animations, he tends to explore more experimental approaches. In the past few years, he has made a series of kaleidoscopic, visual experiments. Then in 2019, he was commissioned to make a music video using paper cut-outs; this was followed by his commission by Random Acts to make ‘Xylem’.

Whilst working on a stop motion feature in Norway, Hughes was walking regularly in local woodland, and started to look closely at tree rings. He started to imagine making a film about multiple trees, but then found it difficult to find enough images online that he could use in developing his idea. He then signed up to an online web-board of tree dendocrinologists, and a Swiss scientist, Fritz Schweingruber, gave him access to his database of 15,000 microscopic photos of Xylem. This provided an accidental opening-up of the possibility of using Xylem images, instead of tree rings.

I was quite mesmerized by all the images he sent me, thinking that it sort of looks like early scratch film, but just highly detailed. I went to art college up here in Edinburgh, and the first thing we did was one of those scratch films on film…and it was thinking I could revisit that, but sort of faking it by just using the images that look like it - Michael Hughes

Describing the process of development, Hughes explained that the first step was to organize some funding so that he could pay a sound artist to work on the film. Hughes had previously contacted Catherine Bray, then Commissioning Editor at Random Acts, to run a couple of ideas by her. She warmed to the description of Xylem, and Hughes pitched this idea to Bray’s assistant at Glasgow Short Film Festival. On being accepted for funding, Hughes had complete freedom in developing his film.

Once Random Acts commissioned it, I got in touch with Keith Duncan, who’s a sound designer up here. Initially I randomly put all the images in line, without any work to it, you know completely random…and played that to him, just to give him an idea of what it’s all about…and he took that inspiration, basically, and came up with the soundtrack. So although I had the images and I knew I wanted to do something with them, it was really the soundtrack that was the starting point - Michael Hughes

The film evokes a distinctly rhythmic pulse, through image sequencing and soundtrack combined, which evokes a heartbeat within a tree, pumping liquid energy from the earth, up the trunk to the leaf tips. This pulsating structure is key to the film’s energy:

It needs that: when the idea started, I ran it past a few friends, like Ainslie Henderson, Will Anderson and Ross Hogg…their advice was totally sound: it needed the structure, this pulsating beat, that Keith came up with - MIchael Hughes

The soundtrack exudes an organic interiority, and Hughes explained how the sound artist pre-recorded lots of individual sounds, then the edit was reasonably improvised over the images. There is fluid tactility that emerges through the conjunction of sound and image, unified in pulsation. Altogether, the film was a two-month production process, with the sound design taking up the first month. Hughes describes how the film needed something to pull it all together, to unify all elements, and this was enabled through the soundtrack. There is a visceral interaction between sound and image. Hughes likes how frenetically busy the film is, which makes it suitable for several viewings to take in all aspects, and the soundtrack extends this sensorial multiplicity.

This film hypnotically takes you within a tree trunk. Sound and microscopic image collide, as you are transported through the ‘arteries’ of plants, from earth, along stems and out to leaf tips. The process of watching becomes so absorbing, as the cell structures pulsate and change before your eyes. There is a feeling of endless flow, as deep internal noises seem to echo across the ever-changing surface. The microscopic images form into beautiful entrancing sequences, and an endless circulation of liquid energy through a tree and across a forest network. There is a strong sense of tapping into the energy web of plants. The film is highly evocative of an experience of Nature, whilst deploying a freshly abstracting approach. Having watched it repeatedly, each viewing offers a different sensory experience. 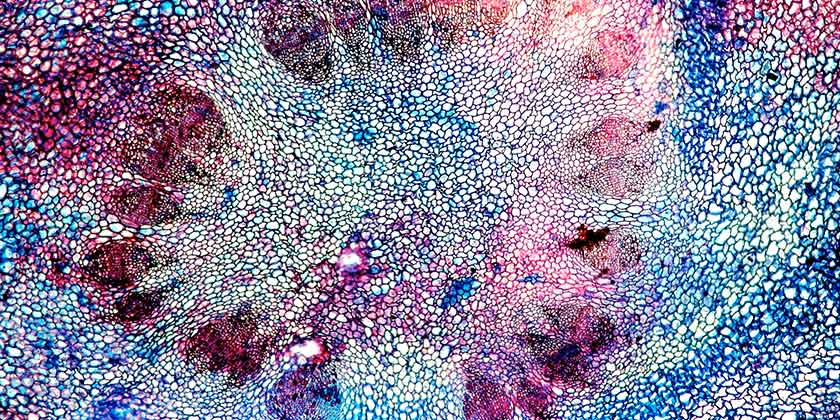 About Michael Hughes
Michael has worked in the animation industry for more than fourteen years, specialising in stop frame animation. He has been involved in all kinds of projects, from TV series, commercials and music videos to short films and feature films. He was working as an animator on Tim Burton’s ‘Frankenweenie’ as well as Wes Anderson’s ‘Fantastic Mr.Fox’ and more recently ’Isle of Dogs’.