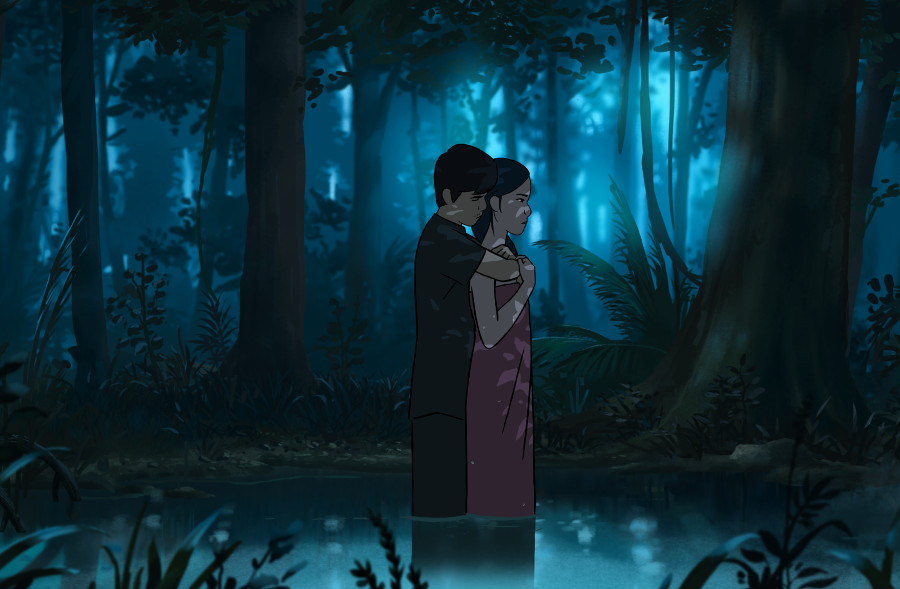 Starting as early as 2013, the Funan project by French/Cambodian filmmaker Denis Do, it has always been a passion project, and trying to convey a bloodied piece of history in Cambodian land during the Khmer Rouge regime (1975-79), inspired by his own memoirs.

Produced by  Les Films D'Ici / Lunanime / Bac Films/ Webspider Productions, Funan won't claim a historical status and archive of the cruelties depicted by the Pol Pot regime (an estimated number of victims between 1,7m  and 2m), but focuses on a story of a women, who needs to become strong in the face of adversity.

Funan is a well-constructed artistic endeavour indeed, but ultimately too polished to support dramatic nuances and character empathy. Chou (Bérénice Bejo), a young Cambodian woman finds herself separated from her son Sovanh, in one of the memorable early scenes of the film.  Faulting her husband Khuon (Louis Garrel) for his inability to act, and not really knowing how to react to the new situation, she simply has to adapt (like her mother) or defy the authorities.

The film provides the necessary documentation to know where we are heading to, and chooses to cover the whole period of the Khmer regime, viewed from the perspective of those working in forced labor camps. Making a more than pertinent analogy to Holocaust films (crowd marches, the choice between leaving your son alone or been executed as a result of trying to find him), Funan really makes a well-intended effort to get a cartography of life in the camps.

Encounters include regime supporters who can actually help,  young women who need to get along with the regime for a piece of bread, and all the others in between. Chou is really the up-and-coming heroic presence, helped to the maximum with the solemn and always motivating soundtrack by Thibault Kientz Agyeman; she's the one to fight for dignity against her well-accommodated mother, she will be the one to help (when needed) a former female regime collaborator, and she's unhindered even towards the end.

The problem with that is that Choo does too much here, constituting all secondary characters as mere puppets for her noble (and very humane) cause. Whatever tragedies are in the camps, are overshadowed by the film's central concern for Shovanh; and the film itself won't leave us no doubt that Shovanh is alive and well (another potential source of dramatic interest  here eliminated). A heroine can flourish even among those very grave circumstances. Still, for a film that won't even show (apart from its final scene) a single event of violent action on screen  -all atrocities are heard, implied or very briefly glimpsed in reaction shots, the job of a hero suddenly becomes too easy to undertake.

Rather than undermining the narrative, the serene, almost immaculate film aesthetics here actually work to the film's favour. Both Denis Do and Michael Crouzat made an extensive research and field work to produce a visual environment which provides a modicum of  safety to the characters, and to point out that Cambodia is actually on the characters' favour. Clearly defined lines, noble characteristics in shadows (which somehow extend even to regime authorities) serve to make the case that 'the new people' (urban people now 'becoming' rural labourers under the Khmer Rouge regime) still retain their old humanity values. The iconography is sometimes daring: the scene when the central couple walks on a Cambodian field is lit with a color palette more properly suited to Apocalypse Now (and Vietnam is not far away both in geography and history). But the interplay of colors and lighting give a more subtle message to the story. Clearly, Choo has more allies here to help her in her search.

In one of the very first scenes of the film, a close-up of flip-flops worn (a sign of warmth, and home here) resonates and contrasts with the crowd marches and the walk to an unknown future. Denis Do's Funan wants this unknown future to be settled dramatically and precisely from the start. In turn, Funan seems at the same time both beautiful and prescribed, both empowering and constrained in its ambitions. Still needs to be seen and experienced, though.

The French premiere of Funan takes place 6 March 2019. GKIDS handles US theatrical rights for Funan, with a US release in spring 2019.