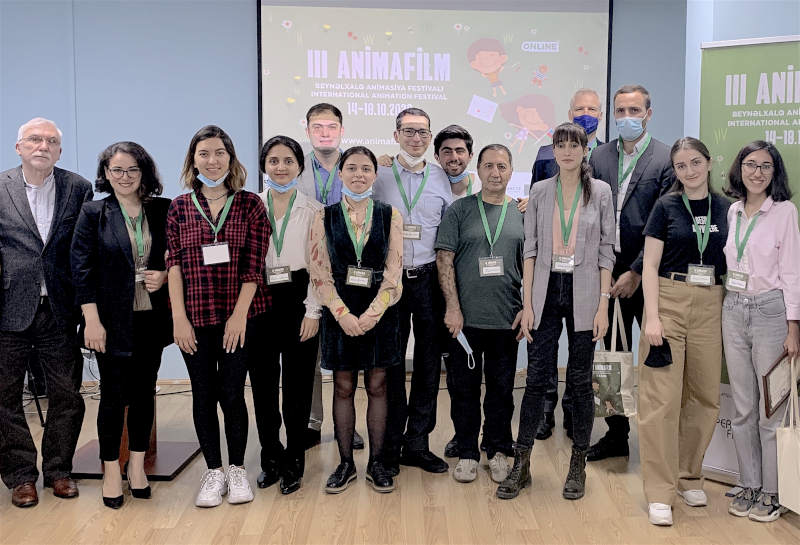 Find all winners of the the third Animafilm International Animation Festival 2020 (Azerbaijan).

II ANIMAFILM International Animation Festival was held in Baku and broadcast online on October 14-18, amidst both a war and a pandemic.

The main purpose of this year's ANIMAFILM Festival was to support and educate children and youth during the war. This year, the program did not include any entertainment (including screening of the competition). However, the educational animation workshops, opening and closing ceremonies, meetings with the International Jury and announcement of the winners took place as usual. And as late intro note, Animafilm was the only cultural event to be held in Azerbaijan during that period.

Three virtual and live theater training sessions on bullying were organized as part of the festival for Children Jury. The sessions were led by the founder of Ritual Mobile Theatre Laboratory, trainer and coordinator of Children Jury Aynur Zarrintaj.

Golden Boat Award of the third ANIMAFILM International Animation Festival was presented at the opening ceremony. This year's award was given to director Hafiz Akbarov for his contribution to Azerbaijani animation.

The opening ceremony was also attended by the head of the Cinematography Department at the Ministry of Culture Rufat Hasanov. In his speech, Hasanov noted that the financial problems related to animated films will be solved soon and new funding will be applied. The opening ceremony was also attended by Deputy Ambassador of the Czech Republic Daniel Putik, Secretary of the Azerbaijan Union of Film Makers Ali Isa Jabbarov and a member of the Children Jury Nurjahan Mammadli.

The Ambassador of Delegation of the European Union to Azerbaijan Kestutis Jankauskas, director of the French Institute in Azerbaijan Jerome Kelle and director of the Film School at Azerbaijan Union of Filmmakers, member of the festival's International Jury Oleg Safaraliyev announced the winners in local categories.

In conclusion, the founder of ANIMAFILM International Animation Festival and CEO of PERI FILM company Rashid Aghamaliyev thanked all the team, partners and those who supported the festival, especially Ministry of Culture of the Republic of Azerbaijan, Azerbaijan Union of Film-makers, Embassy of the Czech Republic to Azerbaijan, Embassy of France in Azerbaijan, French Institute in Azerbaijan, Annecy International Animated Film Festival, Delegation of the European Union to Azerbaijan, US-Educated Azerbaijani Alumni Association, MR Chemical LLC, Salaam Cinema, Mujru Publishing, Chinar Yayimlari publishing and 28 supporters, who contributed to the festival through Tokhum.org Crowdfunding Platform.

Here's the trailer of the 3rd Animafilm International Animation Festival