One more year the Monstra Festival (16-27 May 2022) shines and presents us with exhibitions, live shows, workshops, talks, and animation sessions for all ages. With all this programming, it's tough to be there in all of them. Thus, I give my coverage for the events and films that most caught my attention, especially during the beginning and the end of the festival event.

The exhibition of material from the animated feature film 'My Grandfather's Demons' by Nuno Beato, preceded the festival opening, and it has already been the subject of a preview here.

As the country honoured was Bulgaria, various events related to the country took place along Monstra. In particular, the Anri Koulev events stand out: the Bulgarian artist premiered his 3D feature film, To Put it Mildly; he had a retrospective session, an exhibition of his drawings in the National Society of Fine Arts in Lisbon, in addition to receiving the Career Award 2022. 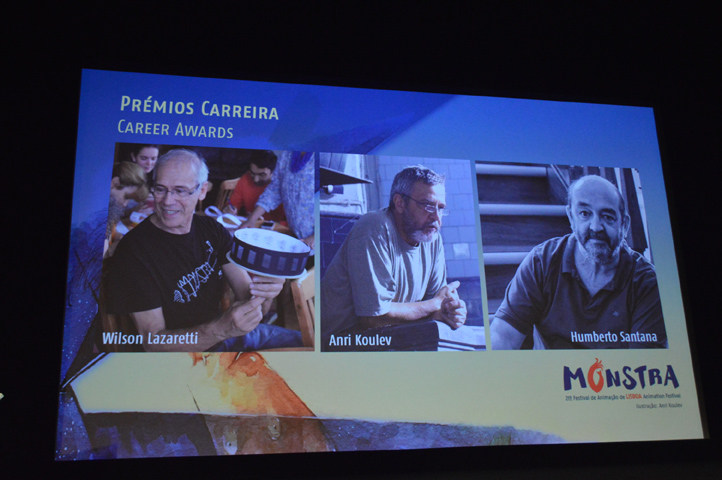 Other awardees included the Brazilian Wilson Lazaretti, for his tireless work in teaching animation and as a director, and the Portuguese Humberto Santana, for the 30 Years of the Animanostra animation studio, in Lisbon, which also had an exhibition during the Festival. It's great and exciting when one can recognize a whole life's work and share those moments. 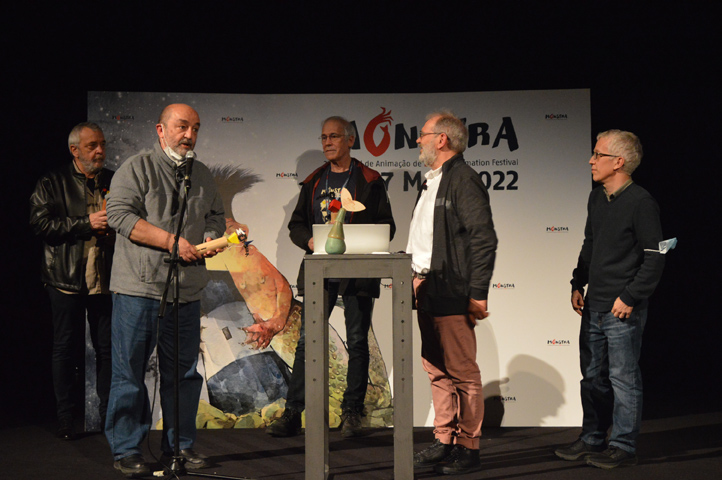 Koulev's exhibition also shared space with two others: the original drawings by Joanna Quinn and the commemoration of the 10th anniversary of the Portuguese studio, BAP. This Porto studio has stood out in recent years in the European animation scene, with animations such as Agouro (David Doutel and Vasco Sá), Tie (Alexandra Ramires) and Purpleboy (Alexandre Siqueira). There is a magical sensation when we see these exhibitions.

BAP exhibition, at National Society of Fine Arts, in Lisbon

They make us remember the films, the moment we watched them, and what we were like at the time. It's as if part of us is being exposed there too. It's fascinating besides being a unique opportunity; you can see up close many elements that are part of those stories which we have experienced on screen.

About shorts: among the five sessions on short films, I managed to attend three of them, in addition to the Vasco Granja session on Portuguese productions. Of these sessions, I highlight:

for the suspense and the way, he presents a macabre story based on real situations. A film where the Kuleshov Effect was implemented all along, with the main character's puppet as its main actor. No wonder he was nominated for an Oscar -and received the award for best short film in the Monstra festival competition.

It is another dense, striking story with an unexpected ending. The narrative is constant and even dull, but there is a reason. That is meant in the end, with the loss of innocence.

Because the queen couldn't miss it, even more so after the well-deserved Oscar nomination. It's incredible how time has only sharpened the critical eye of this animator, who values ​​what is most important in animation: movement. And how does she manage to do what she does? That even makes me dizzy in some sequences. The way she used colour was also brilliant, making all the figures lighter and more fluid, like the time she tries to portray in the short. It received the Jury Special Award.

It stands out for the creative way it presents the story, based on the narrative of Little Red Riding Hood. However, it starts almost like an animation class, from three zoetropes, with an incessant animation based on cycles, but accompanied with creative and intelligent decoupage. In addition to being a fresh cartoon with a dark comedy, it became an oasis in the desert of heavy and introspective themes - it's not a complaint but an observation. That reflects the moment we live in, as art always reflects its own time.

A good animated documentary that talks about the director's own family. Her uncle, who participated in the Portuguese Colonial War, had lived in France and brought things from there to her family in Portugal. Even stuff she picked up from the trash, but in good condition. With a rhythm and a visual narrative very well built around the music, it was the best Portuguese film in the competition. It presents fine lines in the style of metal engraving and the punctual colour as we already saw in Drop by Drop (Alexandra Ramires (Xá), Laura Gonçalves, 2017). It won three awards: Best Portuguese short, Vasco Granja Award, Audience Award. 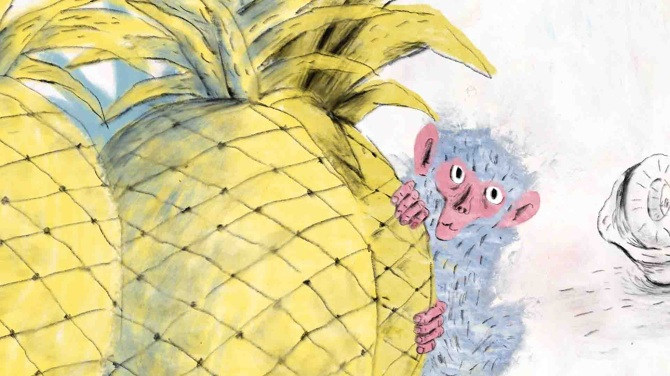 I did manage to watch only one feature film from the competition;  but, as I had already suggested, Bob Spit, We Do Not Like People (Cesar Cabral, 2021) won the Audience Award in this competition.

Another moment worth mentioning was the presentation of Portuguese animation projects, including series, short and feature films. Among the more than 50 projects seen, one particularly caught my attention: They Shot the Piano Player, by Fernando Trueba and Javier Mariscal, directors of Chico & Rita (2010). A French, Spanish, Portuguese (Animanostra Studio) and Dutch co-production is an animated documentary about the early years of Bossa Nova in Brazil, set in the life of the pianist Francisco Tenório Jr., who was kidnapped and died in Argentina in 1976. I'm super curious to see this! 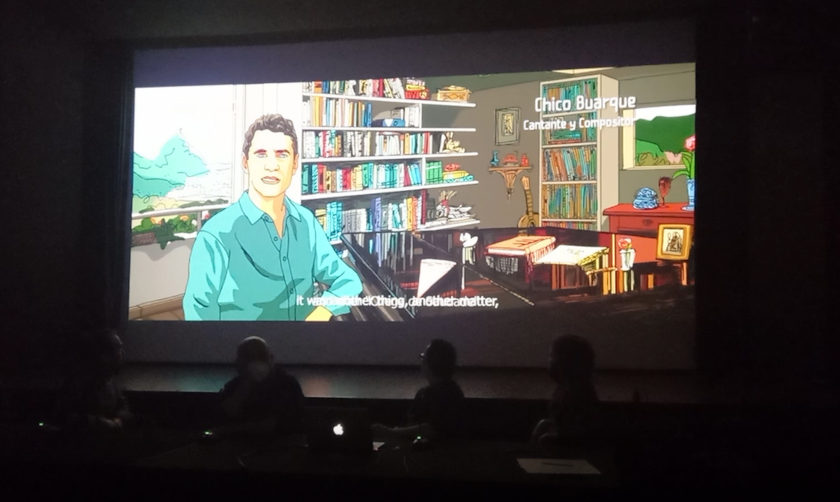 They Shot the Piano Player project at the Monstra Festival presentation

Well, folks, a lot of good stuff was left out of this review. And we look forward to the next edition, whose honoured country will be Japan!

That is, the Monstra will receive Godzilla's visit, :)! 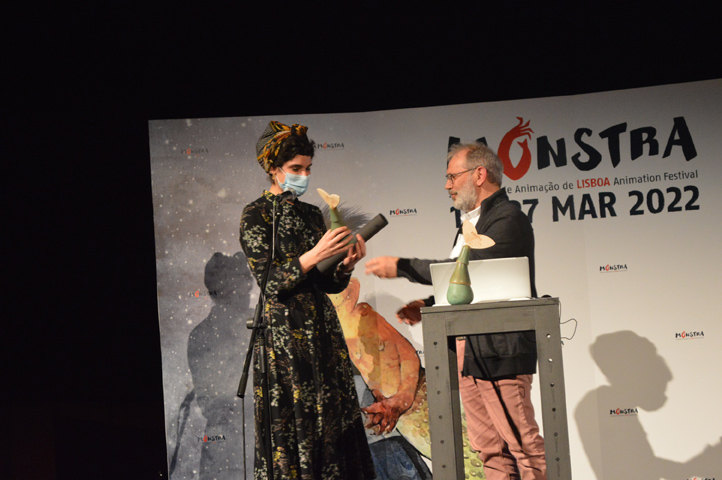 Laura Gonçalves and Fernando Galrito, the artistic director of the Monstra Festival