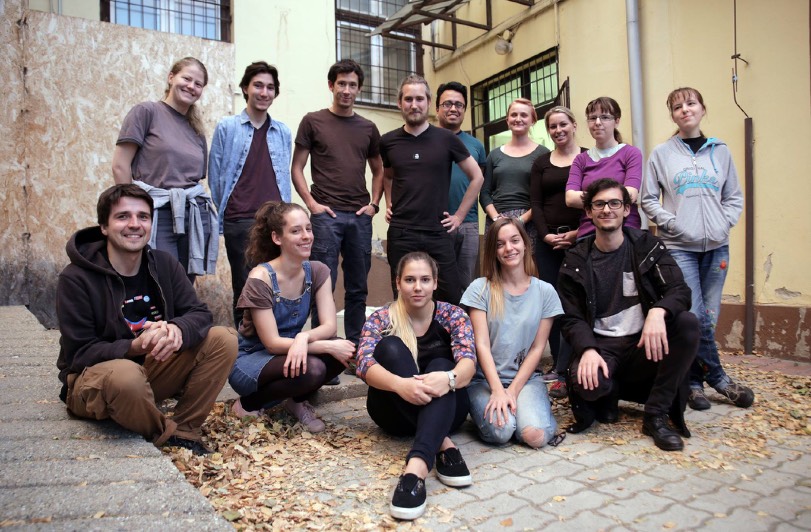 Report and the video for the 2017 stop-motion workshop during Primanima festival is now online.

Over the 4 days, in total, the 12 participants created 24 puppets and over three minutes of animation. Here's the result:

Participants threw themselves into the processes and techniques we shared with them and made some brilliantly accomplished animations for such a short time - Péter Vácz and Joseph Wallace .

The workshop included a mix of lectures, screenings, practical sessions, mini-masterclasses and one-on-one talks with participants. Each day started with a screening where Joseph and Péter shared various puppet animation shorts and making-of videos which were discussed by the group.

During the first two days, participants were taught puppet making techniques using aluminium wire, paper, wood, foam and glue to make puppets that were easy to animate but also durable. The puppets were ‘dressed’ with found objects, papier-mâché and acrylic paint to give them a strong visual identity. For the third and fourth days, the participants learned about cinematography and how to light and shoot their puppets to get the most out of an economic set-up and achieve a cinematic look. The participants shot with Canon DSLR cameras and iMacs with Dragonframe software and were encouraged to explore expressive movement and striking lighting.

The experience of the whole workshop and festival was incredible. I feel excited to experiment with the knowledge and ideas that came from the workshop and more ready to say YES to projects - Heather Colbert, Workshop participant

I find that working intensively on something changes your way of approaching stuff and you see things differently. I’m motivated to step up my work.” Abel Carbajal, Workshop participant.

Péter Vácz was born in 1988 in Budapest, Hungary. He graduated from Moholy-Nagy University of Art and Design in Animation BA (2010) and MA (2012) with his film called ‘Streamschool’ and ‘Rabbit and Deer’ which has won over 50 awards at international festivals including two Oscar-qualifying awards at Atlanta and Nashville Film Festivals. During his studies at MOME he attended The European Animation Production Workshop and took the Professional 3D Character Animation Course in Viborg, Denmark. Since 2013 Péter is represented by the London based Picasso Pictures animation studio as a commercial director.

Joseph Wallace is a BAFTA Cyrmu nominated film and theatre director specialising in animation and puppetry. He has written and directed more than a dozen shorts since 2007, which have received international acclaim and screened at festivals around the world including Kraków Film Festival, London Short Film Festival and Edinburgh International Film Festival, as well as receiving Vimeo Staff Picks. Joseph has also written and directed for theatre and created animated projections for stage as well as working as a puppetry consultant and dramaturge. His collaborators include ‘War Horse’ creators Handspring Puppet Company, Bristol Old Vic and Green Ginger. In 2015 he was made a BBC Performing Arts Fellow and named one of 32 ‘Ones to Watch’. Joseph was the first British participant on the prestigious European training programme Animation Sans Frontières, which led him to co-found Caravel Collective in France. He is active as a curator, writer and lecturer, having spoken at festivals and universities internationally and was responsible for the film programme of the 2015 Bristol Festival of Puppetry.

Founded in 2012, Primanima is an animation festival dedicated to up-and-coming animation directors, screening student, diploma and début films. The World of Stop-Motion Workshop took place during the 2017 Primanima Festival (18-21 Oct).