ZF: How was the film originally conceived?

Fr.G.: For me, 'Les Petits Pois' has been a cinematic adventure since the project dates all the way back to 2016, which is when I wrote the poem… I started presenting the project to producers, submitting it to pitch sessions in festivals, and contacting potential co-authors – from the beginning, and as with 'Playground', I wanted a feminine counterpoint to this masculine vision, even if the poem is written in a 'feminine' register – and, after two successive collaborations with production companies and co-authors that didn’t pan out, I chose to return to the essence of the project – the poem – which we recorded with ten actresses of all ages, both professional and amateur… I also made the decision to transform the film into a project 'without script, producer, or financing'.

Fl.G.: 'Les Petits Pois' was first a poem written by Francis, who wanted it to become an animated film. I had just finished my short film 'My Juke-Box' and wanted to rediscover the pleasure of animating, as in my old self-produced work. Something simple and raw.

ZF: The use of language and how this has been visualized is very sensual and intimate. Was this a collaborative process between Florentine and Francis? How did the ideas form and evolve, both in the writing and the visualization? And can you comment on the use of foley: why did you choose select sounds, in parallel with the changing visuals?

Fr.G.: When I finally proposed the short film project to Florentine …I remember, as we recorded the voices, I sort of let things go with the flow when it came to the interpretation of the text. In fact, when we were thinking about the casting of the film with Alexis Hunot, a precious interlocutor during that whole initial phase of the project, never did we think about holding auditions: what counted most was the range and complimentary musicality and voice timbres of the actresses that I wanted to bring on.

Fl.G.: Francis had given me the text without artistic constraints, but I imposed them on myself, to be as efficient as possible. I only had two afternoons a week to animate the film, so I chose a straight-ahead animation technique in a small format, similar to painting on film. I had never tried pastels on strips of paper, and it was an artistic discovery. The process was experimental. I jotted down my thoughts on the theme in a notebook and then dipped into it to go from one idea to another, going back and forth with the text. I animated rushes out of order and little by little, a structure appeared. I called Francis every month to show him my progress and watch his reactions. His doubts were the most interesting because I had to convince him with my images and stand firm in my intuitions. Working with a co-author was very rewarding. I worked with the voices already recorded by Francis, without sound effects. Originally, we wanted to highlight the visual rhythm of the animation and not add other sounds, but silence is difficult in cinema. And our bias towards the text was already radical, as I didn't want simultaneous subtitles on the images. Our idea was that the public would let themselves be carried away by the French voices and discover the translation later. So, we called on Pascal Bricard, who had worked on my previous film, to build a sound design emphasizing the internal fermenting of the narrators, contributing to the rise in tension.

Fr.G.: For the soundtrack, I remember that at the beginning of the project I was very hesitant to add more sound on top of the vocals, with their successive interweaving discourse. Florentine really had to fight me in order to convince me and, not letting go, I insisted that the sound needed to remain minimalist. But meeting Pascal, and hearing his ideas and our exchanges during the work sessions – the idea, for example, in the first part of the poem, to hear a transition between the countryside and the city, accompanying the bubble of love burst by reality – ended up reassuring me, and helped me loosen my grip a bit. In the end, I almost insisted that he add more sound! It might be there, in fact, that we thought of the rhythmic loop (and its progressive crescendo) in the end credits. An orgasm, in a sense.

ZF: Is the term 'Petits Pois' a French euphemism? Or is it purely a formal metonymy between pods of peas and lips and orifices?

Fr.G.: No, no, there was no intention of creating a euphemism when I wrote the text! In the beginning, my writing process was somewhat automatic (linking itself to the liberating philosophy of writing put forth by the Surrealists) and I moved along using idea associations, playing with sonorities: thus the sound 'oi' (wa) is a recurring motif in the first three stanzas, with the words 'pois', 'doigts', and 'voix' (peas, fingers, voice). Afterward, of course, as I refined the text, the strongly erotic link between the love of taste and the taste of love really smacked me in the face!

ZF: 'Les Petits Pois' seems to build on some of the visual approaches you explored in 'Pixel Joy'. Can you tell us how you feel these ideas, of sensuality and intimacy, have developed in the new work?

Fl.G.: Indeed, 'Les Petits Pois' is the end of my trilogy on pleasure, which began with 'R.E.M.' in 2011 and continued in 2012 with 'Pixel Joy'. I also restrict the colors to reduce the possibilities and the execution time and thus push the creativity; because it's from constraints that freedom is born. The small format makes visible the gesture and the materiality of the image. The straight-ahead technique gives a spontaneous continuity between the frames, which pass from one to another, between abstraction and figuration. I seek to represent fleeting sensations and I play on the interior and exterior of the character. Emotions and representations of the body mingle in rhythm. I think animation is the perfect medium to show the intimacy of a couple in a stylized way. The result is sweet despite the rawness of some scenes.

ZF: In contrast with 'Mon Juke-Box', you have chosen a very immediate, automatic drawing style of process. Can you tell us why you selected this approach, and how it may impact the viewer’s interpretation?

Fl.G.: I want the viewer to be carried away by the continuous flow of the drawing. May he not know where it is taking him, may he be intrigued and curious. Let him also live an experience. These films are not built like classic short films and do not follow scripts, only working themes and formal research; unlike 'My Juke-Box' and before that 'Ru', which were more traditional narrative films in which I needed to set up my characters. The usual process is longer and less spontaneous… I need to make a film, so I'm doing it. And this time, I had the chance to collaborate with a small team: my co-author Francis, the creator of the soundtrack Pascal, and the Novanima team. It was ideal for creating.

ZF: And was this more individual, less team-based, and less technical approach more suited to the sensuality of the subject matter?

Fl.G.: It's true that animating everything alone makes it easier to improvise, edit the film as you go, and react more easily to the difficulties encountered. However, I didn't want to be completely alone, because explaining what you're doing to someone is invaluable in formalizing your thoughts and confronting them to the world. Being in a small team is for me the ideal format.

ZF: The cyclic structure of switching between spoken word and loose, at times indeterminate visuals, and translated text floating and drifting transparency brings a playful tactile quality but also a poetic quality of the transience of connection. What were your intentions in developing this cyclic structure? And can you tell us about the more abrupt ending; what were your intentions in not translating the final spoken sections, and in overlapping them?

Fl.G.: We didn't want to illustrate the poem, but rather embody it in images, and from the start, the question of translation arose. The recording in French was a very important element in the construction of the project by Francis, so we did not plan an English recording. But we needed to give clues to the spectators. We, therefore, made the choice to delay the translation of the poem and make it appear on the screen after the animation, as a reminiscence. The text speaks of a past love story, of memories that we remember with passion and then anger. The animation of the first three verses is therefore playful and joyful before the change in tone, which breaks with the cycle set up until now. The spectator is then projected into another visual universe highlighting the tears in the relationship, until the final sentence where he understands that the story is over. This last part is intended to be intense and uncut, breathtaking.

Fr.G.: In the end, it creates two different ways to perceive the film: one being more emotional, but for an audience that doesn’t understand French, and thus is more receptive to the images and vocal intonations and interactions; the other being more intellectual, for a francophone audience who will directly access the meaning. It’ll be a bit like 'right brain' versus 'left brain'! 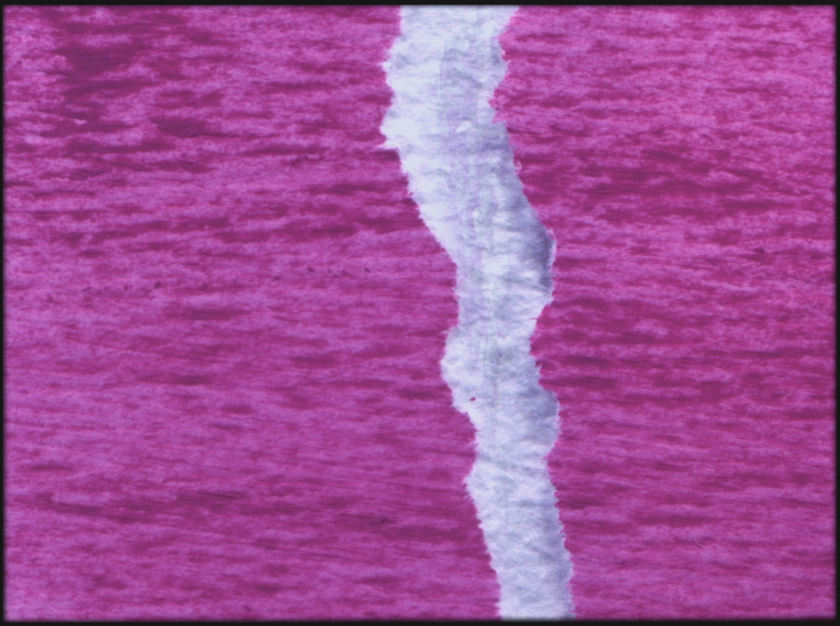 Film Review (Joseph Norman):
This deeply sensual film oozes sensuality, taste, touch, and desire. The film is composed of cycles of images and voiceover in French, talking about peas and then moving on to more intimate tastes and connections. Visually, the film uses simple crayon drawings of shapes which echo flowers blooming, pea pods opening, mouths and lips, vulvas, and tongues. Through rhythmic repetition, shapes transform from lips to peapods; bodily openings and closings morph into flower bursts.

Almost a reverie, the beautifully written spoken words open with ‘By the way, what’s the relation between green peas and you? Except that you are both on my tongue and in my belly?’ The deeply sensual voiceovers continue intermittently, along with separate text in English. At one point, we hear a purring cat and the text seems to vibrate along with the purrs.

In the final section of the film, the playful sensuality is drowned out by sharp words and conflict, and the screen becomes a jagged surface. As the French are not translated for this final part, and the spoken words are often overlapping, we are left with a sense of breaking apart, the ending of a relationship, and ending abruptly without translation, a final loss of connection. 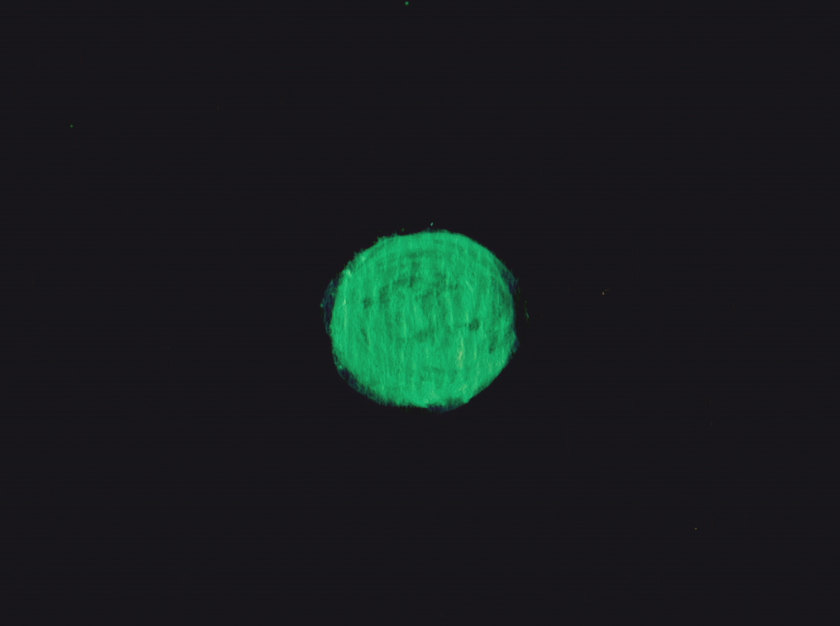 About Francis Gavelle:
French critic, Francis Gavelle is, since 1998, the producer of a show dedicated to literature, music, and cinema for an independent radio (Radio Libertaire). From 2001 to 2011, he worked as a member of the Short Film Commission, for the Cannes Film Festival’s Critics’ Week, and was, in 2012, jury of the 'Caméra d’or Prize'. Otherwise, he initiated, in 2015, for the Annecy International Animation Film Festival, the 'André-Martin Prize'.

About Florentine Grelier:
Florentine Grelier likes to explore the many possibilities of frame by frame. Since 2010, she has supervised workshops and taught animation while keeping up her experiments. His multi-technical films have been selected and awarded in many festivals. 'My Juke-Box', a personal and touching film, was selected at the Sundance Festival and received the 'André-Martin Prize' in 2019. After 'R.E.M' animated on 16mm and 'Pixel Joy' on Nintendo DS, she finished her trilogy of direct, square, and purple films with 'Green Peas', a short film drawn with pastel.